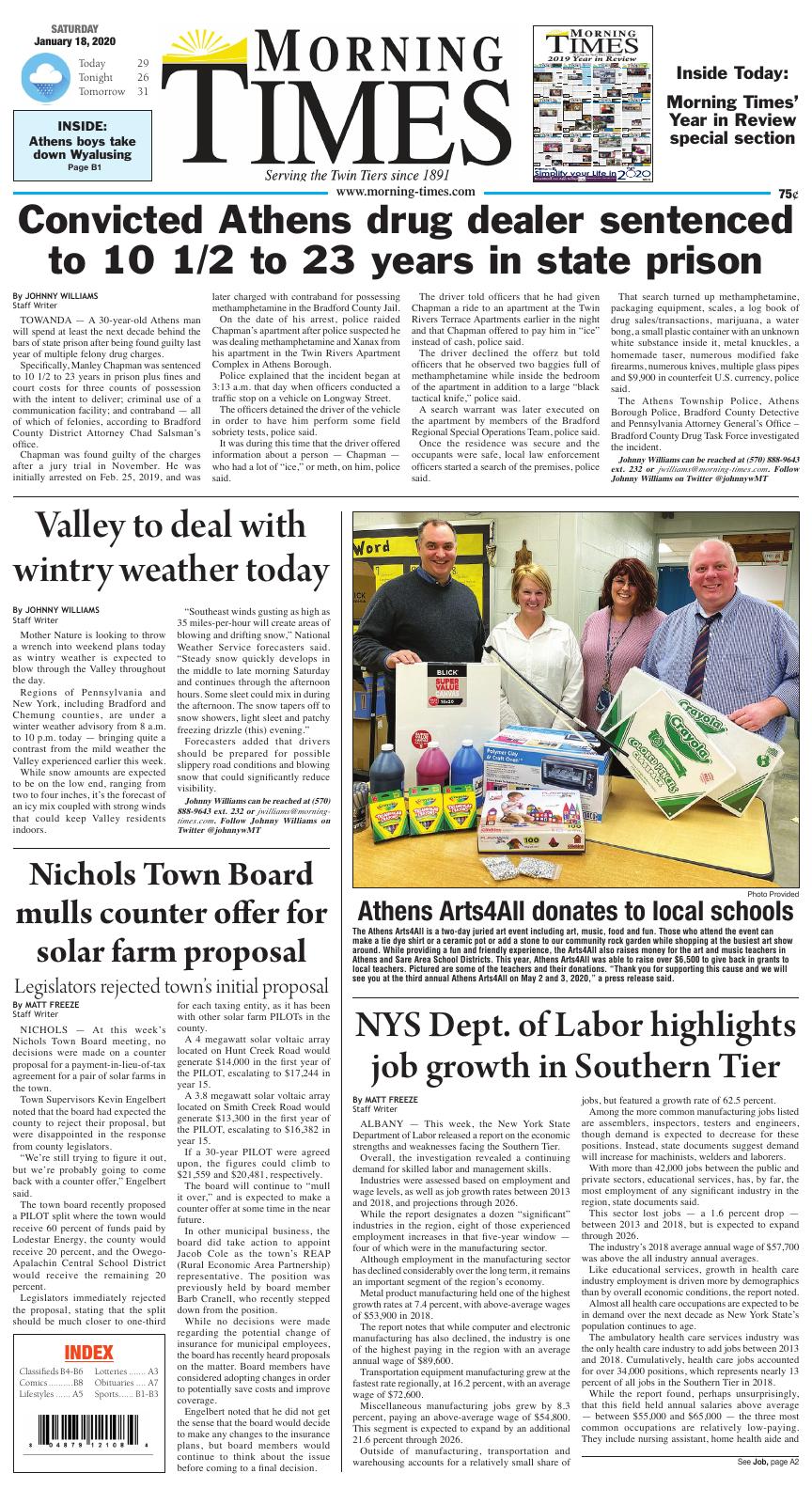 TOWANDA — A 30-year-old Athens man will spend at least the next decade behind the bars of state prison after being found guilty last year of multiple felony drug charges.

Specifically, Manley Chapman was sentenced to 10 1/2 to 23 years in prison plus fines and court costs for three counts of possession with the intent to deliver; criminal use of a communication facility; and contraband — all of which of felonies, according to Bradford County District Attorney Chad Salsman’s office.

Chapman was found guilty of the charges after a jury trial in November. He was initially arrested on Feb. 25, 2019, and was later charged with contraband for possessing methamphetamine in the Bradford County Jail.

On the date of his arrest, police raided Chapman’s apartment after police suspected he was dealing methamphetamine and Xanax from his apartment in the Twin Rivers Apartment Complex in Athens Borough.

Police explained that the incident began at 3:13 a.m. that day when officers conducted a traffic stop on a vehicle on Longway Street.

The officers detained the driver of the vehicle in order to have him perform some field sobriety tests, police said.

It was during this time that the driver offered information about a person — Chapman — who had a lot of “ice,” or meth, on him, police said.

The driver told officers that he had given Chapman a ride to an apartment at the Twin Rivers Terrace Apartments earlier in the night and that Chapman offered to pay him in “ice” instead of cash, police said.

The driver declined the offerz but told officers that he observed two baggies full of methamphetamine while inside the bedroom of the apartment in addition to a large “black tactical knife,” police said.

A search warrant was later executed on the apartment by members of the Bradford Regional Special Operations Team, police said.

Once the residence was secure and the occupants were safe, local law enforcement officers started a search of the premises, police said. 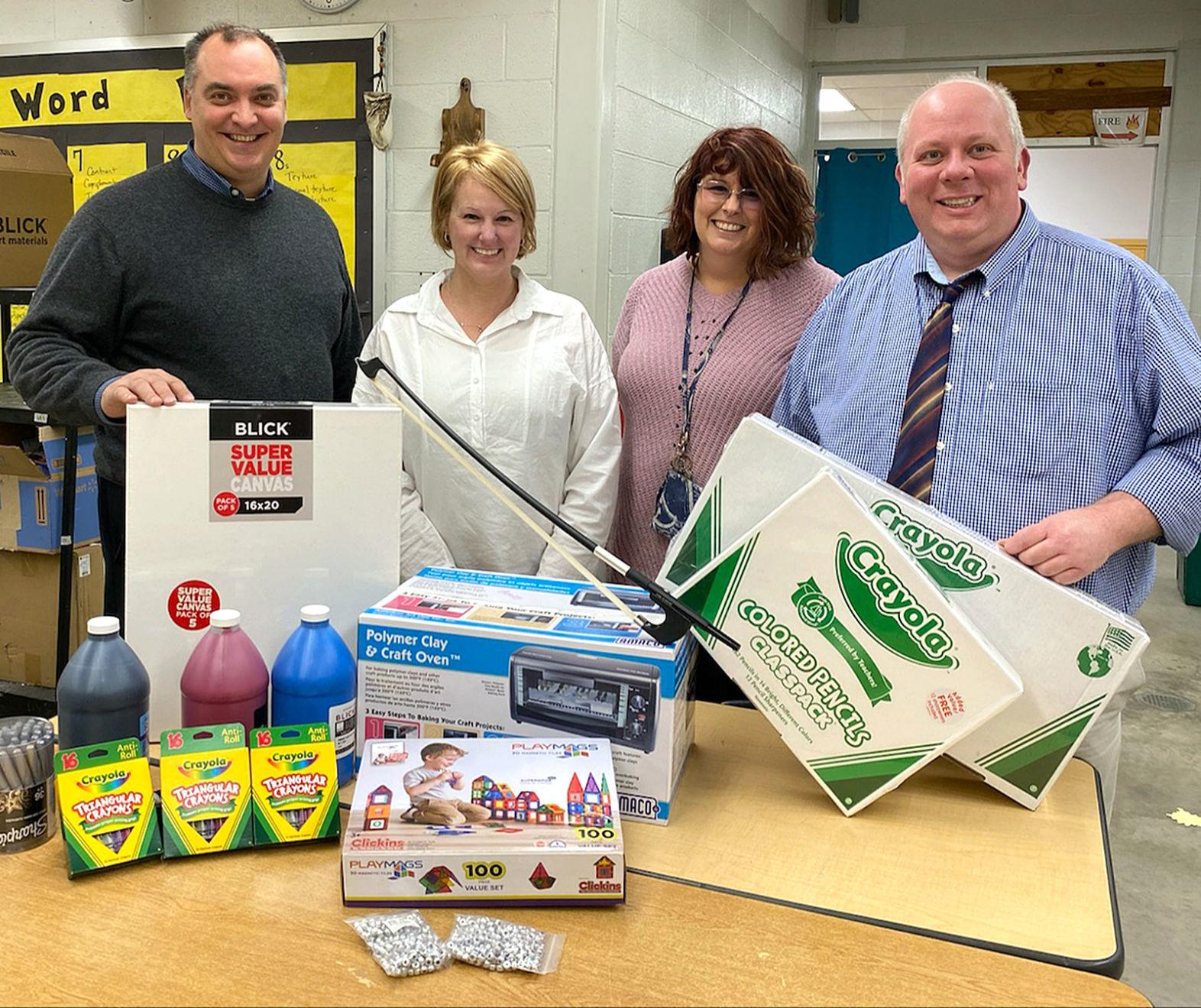 The Athens Arts4All is a two-day juried art event including art, music, food and fun. Those who attend the event can make a tie dye shirt or a ceramic pot or add a stone to our community rock garden while shopping at the busiest art show around. While providing a fun and friendly experience, the Arts4All also raises money for the art and music teachers in Athens and Sare Area School Districts. This year, Athens Arts4All was able to raise over $6,500 to give back in grants to local teachers. Pictured are some of the teachers and their donations. “Thank you for supporting this cause and we will see you at the third annual Athens Arts4All on May 2 and 3, 2020,” a press release said.

ALBANY — This week, the New York State Department of Labor released a report on the economic strengths and weaknesses facing the Southern Tier.

Overall, the investigation revealed a continuing demand for skilled labor and management skills.

Industries were assessed based on employment and wage levels, as well as job growth rates between 2013 and 2018, and projections through 2026.

While the report designates a dozen “significant” industries in the region, eight of those experienced employment increases in that five-year window — four of which were in the manufacturing sector.

Although employment in the manufacturing sector has declined considerably over the long term, it remains an important segment of the region’s economy.

Metal product manufacturing held one of the highest growth rates at 7.4 percent, with above-average wages of $53,900 in 2018.

The report notes that while computer and electronic manufacturing has also declined, the industry is one of the highest paying in the region with an average annual wage of $89,600.

Transportation equipment manufacturing grew at the fastest rate regionally, at 16.2 percent, with an average wage of $72,600.

Miscellaneous manufacturing jobs grew by 8.3 percent, paying an above-average wage of $54,800. This segment is expected to expand by an additional 21.6 percent through 2026.

Outside of manufacturing, transportation and warehousing accounts for a relatively small share of jobs, but featured a growth rate of 62.5 percent.

Among the more common manufacturing jobs listed are assemblers, inspectors, testers and engineers, though demand is expected to decrease for these positions. Instead, state documents suggest demand will increase for machinists, welders and laborers.

With more than 42,000 jobs between the public and private sectors, educational services, has, by far, the most employment of any significant industry in the region, state documents said.

The industry’s 2018 average annual wage of $57,700 was above the all industry annual averages.

Like educational services, growth in health care industry employment is driven more by demographics than by overall economic conditions, the report noted.

Almost all health care occupations are expected to be in demand over the next decade as New York State’s population continues to age.

The ambulatory health care services industry was the only health care industry to add jobs between 2013 and 2018. Cumulatively, health care jobs accounted for over 34,000 positions, which represents nearly 13 percent of all jobs in the Southern Tier in 2018.

While the report found, perhaps unsurprisingly, that this field held annual salaries above average — between $55,000 and $65,000 — the three most common occupations are relatively low-paying. They include nursing assistant, home health aide and personal care aide.

In terms of most common health care positions, registered nurses and nursing assistants account for roughly 37 percent in that field. Fastest-growing demands are receptionists and registered nurses, with expected growth of 13.1 and 11.8 percent, respectively.

Demands for medical assistants, personal care and home health aides are expected to increase by roughly 33 percent each, with average salaries around $30,000.

One of the region’s most common industries is in the building and construction sector.

Among the top professions in this industry are carpenters, construction workers and maintenance personnel account for over 56 percent.

Demand growth for these jobs is expected to increase by an average of 6 percent through 2026.

An outlier in that industry, and among the top 10 most-common job titles in the region is construction manager, a 4.3 percent share of the workforce, which nets an average $96,377 salary with an expected growth rate of 7 percent through 2026.

Another high-ranking local industry is in the scientific and technical field, where “human capital is the major input,” the study found.

Mother Nature is looking to throw a wrench into weekend plans today as wintry weather is expected to blow through the Valley throughout the day.

Regions of Pennsylvania and New York, including Bradford and Chemung counties, are under a winter weather advisory from 8 a.m. to 10 p.m. today — bringing quite a contrast from the mild weather the Valley experienced earlier this week.

While snow amounts are expected to be on the low end, ranging from two to four inches, it’s the forecast of an icy mix coupled with strong winds that could keep Valley residents indoors.

“Southeast winds gusting as high as 35 miles-per-hour will create areas of blowing and drifting snow,” National Weather Service forecasters said. “Steady snow quickly develops in the middle to late morning Saturday and continues through the afternoon hours. Some sleet could mix in during the afternoon. The snow tapers off to snow showers, light sleet and patchy freezing drizzle (this) evening.”

Forecasters added that drivers should be prepared for possible slippery road conditions and blowing snow that could significantly reduce visibility.

NICHOLS — At this week’s Nichols Town Board meeting, no decisions were made on a counter proposal for a payment-in-lieu-of-tax agreement for a pair of solar farms in the town.

Town Supervisors Kevin Engelbert noted that the board had expected the county to reject their proposal, but were disappointed in the response from county legislators.

“We’re still trying to figure it out, but we’re probably going to come back with a counter offer,” Engelbert said.

The town board recently proposed a PILOT split where the town would receive 60 percent of funds paid by Lodestar Energy, the county would receive 20 percent, and the Owego-Apalachin Central School District would receive the remaining 20 percent.

Legislators immediately rejected the proposal, stating that the split should be much closer to one-third for each taxing entity, as it has been with other solar farm PILOTs in the county.

The board will continue to “mull it over,” and is expected to make a counter offer at some time in the near future.

In other municipal business, the board did take action to appoint Jacob Cole as the town’s REAP (Rural Economic Area Partnership) representative. The position was previously held by board member Barb Cranell, who recently stepped down from the position.

While no decisions were made regarding the potential change of insurance for municipal employees, the board has recently heard proposals on the matter. Board members have considered adopting changes in order to potentially save costs and improve coverage.

Engelbert noted that he did not get the sense that the board would decide to make any changes to the insurance plans, but board members would continue to think about the issue before coming to a final decision.