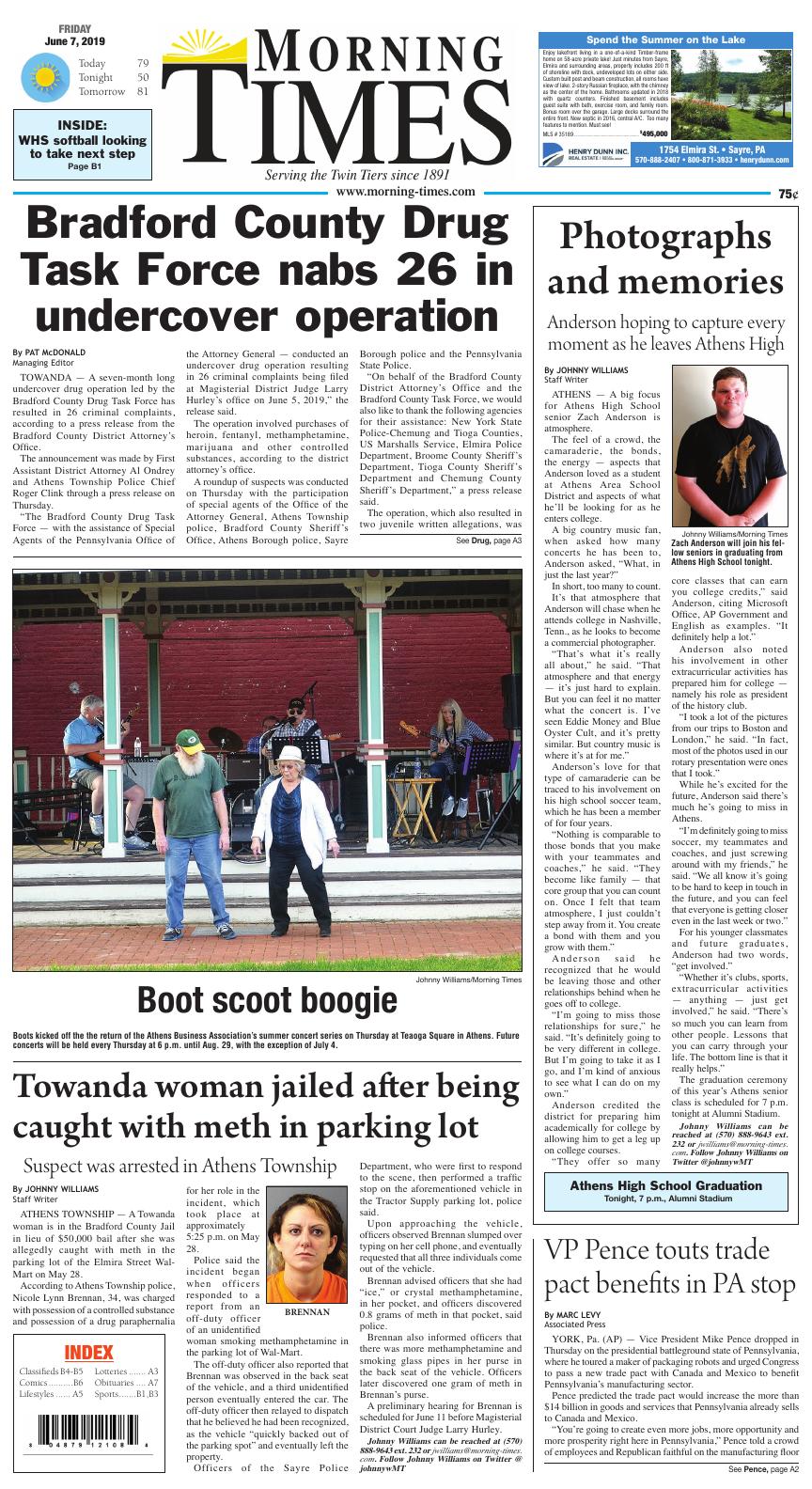 The announcement was made by First Assistant District Attorney Al Ondrey and Athens Township Police Chief Roger Clink through a press release on Thursday.

“The Bradford County Drug Task Force — with the assistance of Special Agents of the Pennsylvania Office of the Attorney General — conducted an undercover drug operation resulting in 26 criminal complaints being filed at Magisterial District Judge Larry Hurley’s office on June 5, 2019,” the release said.

The operation involved purchases of heroin, fentanyl, methamphetamine, marijuana and other controlled substances, according to the district attorney’s office.

A roundup of suspects was conducted on Thursday with the participation of special agents of the Office of the Attorney General, Athens Township police, Bradford County Sheriff’s Office, Athens Borough police, Sayre Borough police and the Pennsylvania State Police.

The operation, which also resulted in two juvenile written allegations, was conducted from November of 2018 through May of this year and involved residents of Bradford County, Pennsylvania and Chemung and Tioga counties in New York.

“This was a massive drug operation that was transporting dangerous drugs such as heroin and fentanyl across state lines into Bradford County neighborhoods,” said Attorney General Josh Shapiro. “These poisons are fueling an epidemic that is devastating Pennsylvania communities, and it is a top priority of law enforcement to prevent them from coming into our commonwealth in the first place.”

Shapiro praised the work of law enforcement and the district attorney’s office in Bradford County.

“I’m grateful for the strong collaboration between our partners in the Bradford County District Attorney’s Office as well as local, state and federal law enforcement to break up this organization and keep the people of Bradford County safe,” Shapiro said.

Check back with the Morning Times for specifics on the 26 criminal cases. 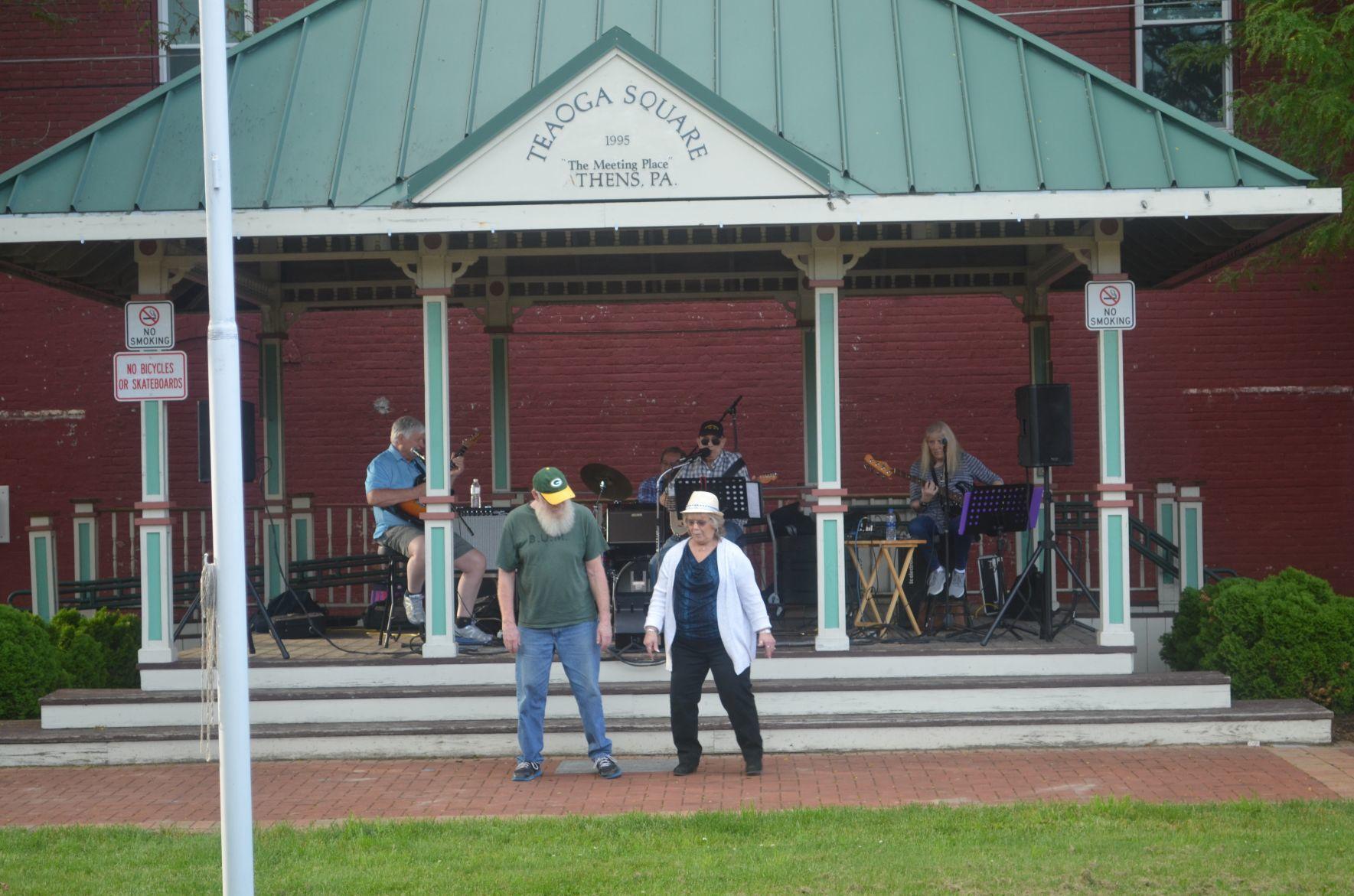 Boots kicked off the the return of the Athens Business Association’s summer concert series on Thursday at Teaoga Square in Athens. Future concerts will be held every Thursday at 6 p.m. until Aug. 29, with the exception of July 4.

ATHENS TOWNSHIP — A Towanda woman is in the Bradford County Jail in lieu of $50,000 bail after she was allegedly caught with meth in the parking lot of the Elmira Street Wal-Mart on May 28.

According to Athens Township police, Nicole Lynn Brennan, 34, was charged with possession of a controlled substance and possession of a drug paraphernalia for her role in the incident, which took place at approximately 5:25 p.m. on May 28.

Police said the incident began when officers responded to a report from an off-duty officer of an unidentified woman smoking methamphetamine in the parking lot of Wal-Mart.

Officers of the Sayre Police Department, who were first to respond to the scene, then performed a traffic stop on the aforementioned vehicle in the Tractor Supply parking lot, police said.

Upon approaching the vehicle, officers observed Brennan slumped over typing on her cell phone, and eventually requested that all three individuals come out of the vehicle.

Brennan advised officers that she had “ice,” or crystal methamphetamine, in her pocket, and officers discovered 0.8 grams of meth in that pocket, said police.

Brennan also informed officers that there was more methamphetamine and smoking glass pipes in her purse in the back seat of the vehicle. Officers later discovered one gram of meth in Brennan’s purse.

A preliminary hearing for Brennan is scheduled for June 11 before Magisterial District Court Judge Larry Hurley.

The feel of a crowd, the camaraderie, the bonds, the energy — aspects that Anderson loved as a student at Athens Area School District and aspects of what he’ll be looking for as he enters college.

A big country music fan, when asked how many concerts he has been to, Anderson asked, “What, in just the last year?”

In short, too many to count.

It’s that atmosphere that Anderson will chase when he attends college in Nashville, Tenn., as he looks to become a commercial photographer.

“That’s what it’s really all about,” he said. “That atmosphere and that energy — it’s just hard to explain. But you can feel it no matter what the concert is. I’ve seen Eddie Money and Blue Oyster Cult, and it’s pretty similar. But country music is where it’s at for me.”

Anderson’s love for that type of camaraderie can be traced to his involvement on his high school soccer team, which he has been a member of for four years.

“Nothing is comparable to those bonds that you make with your teammates and coaches,” he said. “They become like family — that core group that you can count on. Once I felt that team atmosphere, I just couldn’t step away from it. You create a bond with them and you grow with them.”

Anderson said he recognized that he would be leaving those and other relationships behind when he goes off to college.

“I’m going to miss those relationships for sure,” he said. “It’s definitely going to be very different in college. But I’m going to take it as I go, and I’m kind of anxious to see what I can do on my own.”

Anderson credited the district for preparing him academically for college by allowing him to get a leg up on college courses.

“They offer so many core classes that can earn you college credits,” said Anderson, citing Microsoft Office, AP Government and English as examples. “It definitely help a lot.”

Anderson also noted his involvement in other extracurricular activities has prepared him for college — namely his role as president of the history club.

“I took a lot of the pictures from our trips to Boston and London,” he said. “In fact, most of the photos used in our rotary presentation were ones that I took.”

While he’s excited for the future, Anderson said there’s much he’s going to miss in Athens.

“I’m definitely going to miss soccer, my teammates and coaches, and just screwing around with my friends,” he said. “We all know it’s going to be hard to keep in touch in the future, and you can feel that everyone is getting closer even in the last week or two.”

For his younger classmates and future graduates, Anderson had two words, “get involved.”

“Whether it’s clubs, sports, extracurricular activities — anything — just get involved,” he said. “There’s so much you can learn from other people. Lessons that you can carry through your life. The bottom line is that it really helps.”

The graduation ceremony of this year’s Athens senior class is scheduled for 7 p.m. tonight at Alumni Stadium.