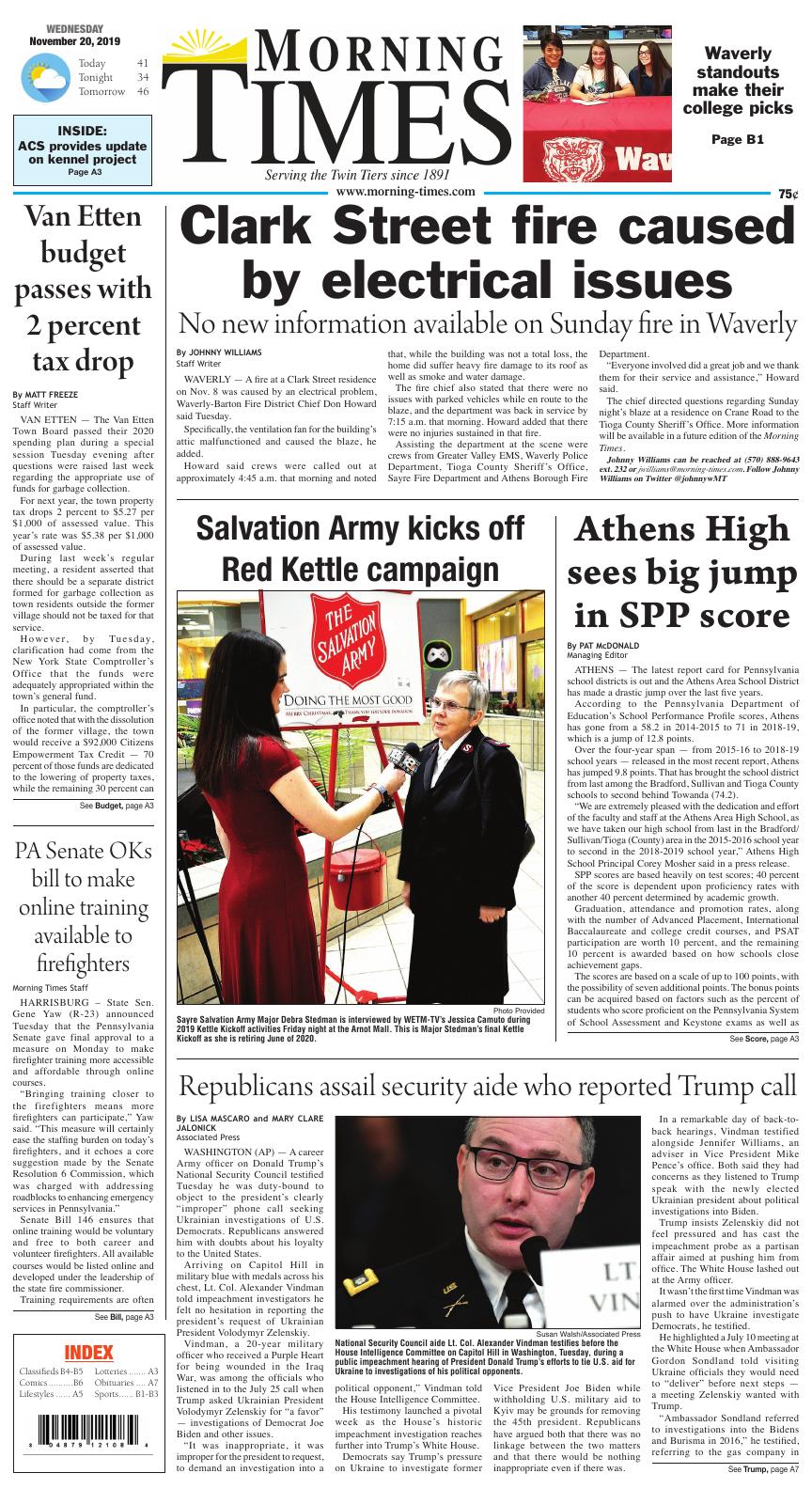 Specifically, the ventilation fan for the building’s attic malfunctioned and caused the blaze, he added.

Howard said crews were called out at approximately 4:45 a.m. that morning and noted that, while the building was not a total loss, the home did suffer heavy fire damage to its roof as well as smoke and water damage.

“Everyone involved did a great job and we thank them for their service and assistance,” Howard said.

The chief directed questions regarding Sunday night’s blaze at a residence on Crane Road to the Tioga County Sheriff’s Office. More information will be available in a future edition of the Morning Times. 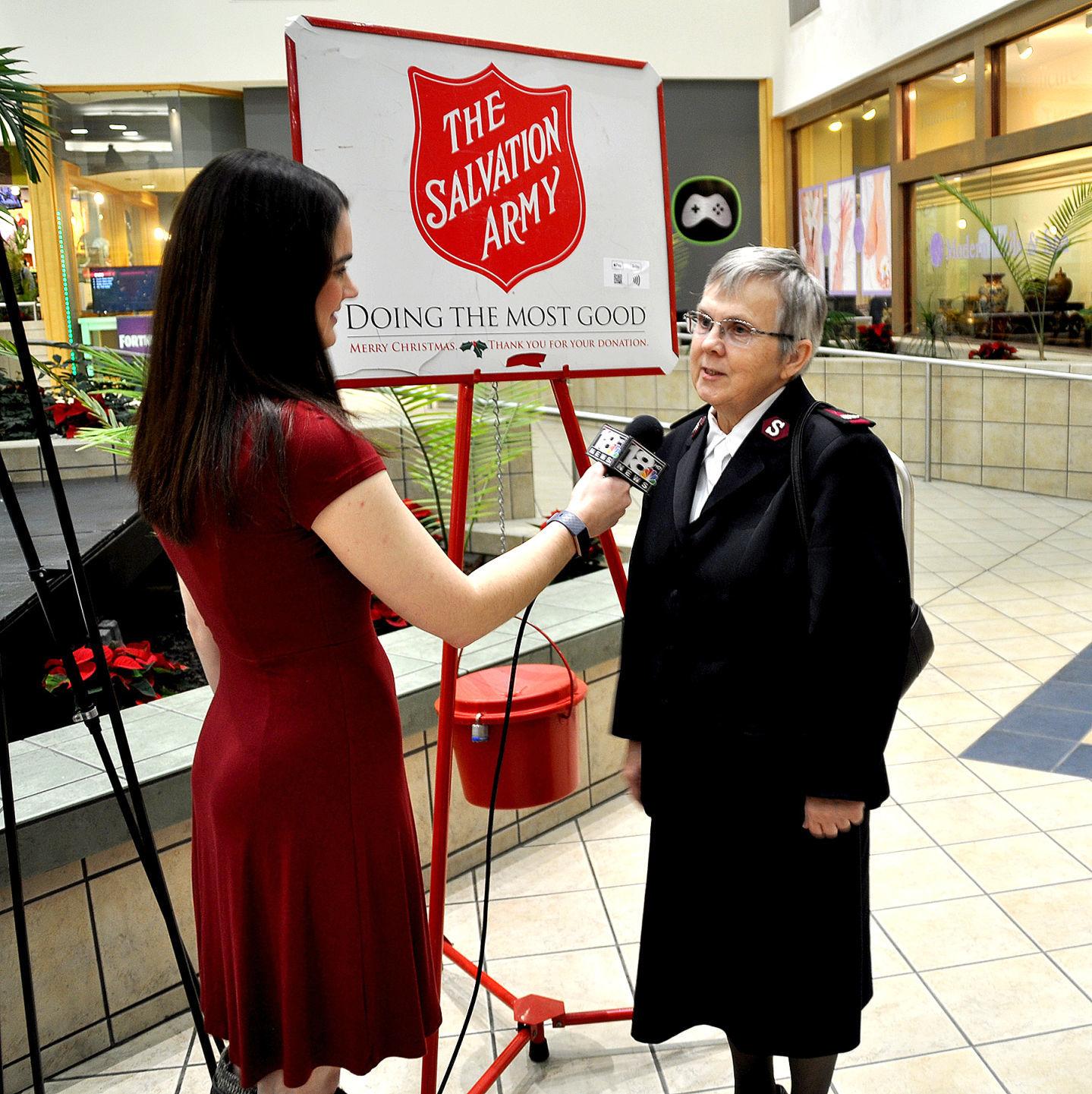 Sayre Salvation Army Major Debra Stedman is interviewed by WETM-TV’s Jessica Camuto during 2019 Kettle Kickoff activities Friday night at the Arnot Mall. This is Major Stedman’s final Kettle Kickoff as she is retiring June of 2020.

ATHENS — The latest report card for Pennsylvania school districts is out and the Athens Area School District has made a drastic jump over the last five years.

Over the four-year span — from 2015-16 to 2018-19 school years — released in the most recent report, Athens has jumped 9.8 points. That has brought the school district from last among the Bradford, Sullivan and Tioga County schools to second behind Towanda (74.2).

“We are extremely pleased with the dedication and effort of the faculty and staff at the Athens Area High School, as we have taken our high school from last in the Bradford/Sullivan/Tioga (County) area in the 2015-2016 school year to second in the 2018-2019 school year,” Athens High School Principal Corey Mosher said in a press release.

SPP scores are based heavily on test scores; 40 percent of the score is dependent upon proficiency rates with another 40 percent determined by academic growth.

Graduation, attendance and promotion rates, along with the number of Advanced Placement, International Baccalaureate and college credit courses, and PSAT participation are worth 10 percent, and the remaining 10 percent is awarded based on how schools close achievement gaps.

The scores are based on a scale of up to 100 points, with the possibility of seven additional points. The bonus points can be acquired based on factors such as the percent of students who score proficient on the Pennsylvania System of School Assessment and Keystone exams as well as industry-based tests for career and technical education or the number of students who score a three or above on Advanced Placement tests.

Mosher credited the jump in scores to changes made at the high school.

The school district also took time to learn from other successful districts, according to the press release.

“We spent time outside of our school district visiting other districts and learning best practices and strategies that were positively affecting student learning,” Mosher said. “That created a desire within our building and staff to be a model high school that implements best practice and in which other school districts want to come, visit us, and see the great things we are doing within the school and classroom that impact student learning.”

Mosher praised his staff for the improvements made over the past five years.

“We are very proud of our staff and commend them for their efforts,” he said. “We often use the phrase in the high school “from good to great” as we strive to improve each and every year as we help develop our future young leaders and graduates that can compete in an ever-changing global economy.”

VAN ETTEN — The Van Etten Town Board passed their 2020 spending plan during a special session Tuesday evening after questions were raised last week regarding the appropriate use of funds for garbage collection.

During last week’s regular meeting, a resident asserted that there should be a separate district formed for garbage collection as town residents outside the former village should not be taxed for that service.

However, by Tuesday, clarification had come from the New York State Comptroller’s Office that the funds were adequately appropriated within the town’s general fund.

In particular, the comptroller’s office noted that with the dissolution of the former village, the town would receive a $92,000 Citizens Empowerment Tax Credit — 70 percent of those funds are dedicated to the lowering of property taxes, while the remaining 30 percent can be spent however the receiving municipality sees fit.

In Van Etten’s case, town board members allocated those dollars into the general fund, which would offset the costs of street lights, sidewalks, the cemetery and garbage collection.

Councilman Fred Swayze Jr. explained that the above-noted former village expenses were lumped into the general fund, with the above CETC funds, in order to keep from levying additional taxes onto residents of the former village.

Overall, the $1.533 million spending plan reflects an expense reduction of $97,452 over this year.

“Bringing training closer to the firefighters means more firefighters can participate,” Yaw said. “This measure will certainly ease the staffing burden on today’s firefighters, and it echoes a core suggestion made by the Senate Resolution 6 Commission, which was charged with addressing roadblocks to enhancing emergency services in Pennsylvania.”

Senate Bill 146 ensures that online training would be voluntary and free to both career and volunteer firefighters. All available courses would be listed online and developed under the leadership of the state fire commissioner.

Training requirements are often cited as a barrier to recruitment and retention, particularly for volunteers, because they can be costly and time-consuming, often demanding travel and time away from work and family.

Yaw noted that the fire commissioner would have the authority to prioritize specific training topics and provide a certificate of completion to a firefighter who successfully completes an online firefighter training program.

“We are blessed to have a number of highly skilled and dedicated individuals in our area who volunteer their time and efforts to protect our communities during times of emergencies,” said Yaw. “I was pleased to support this bill.”