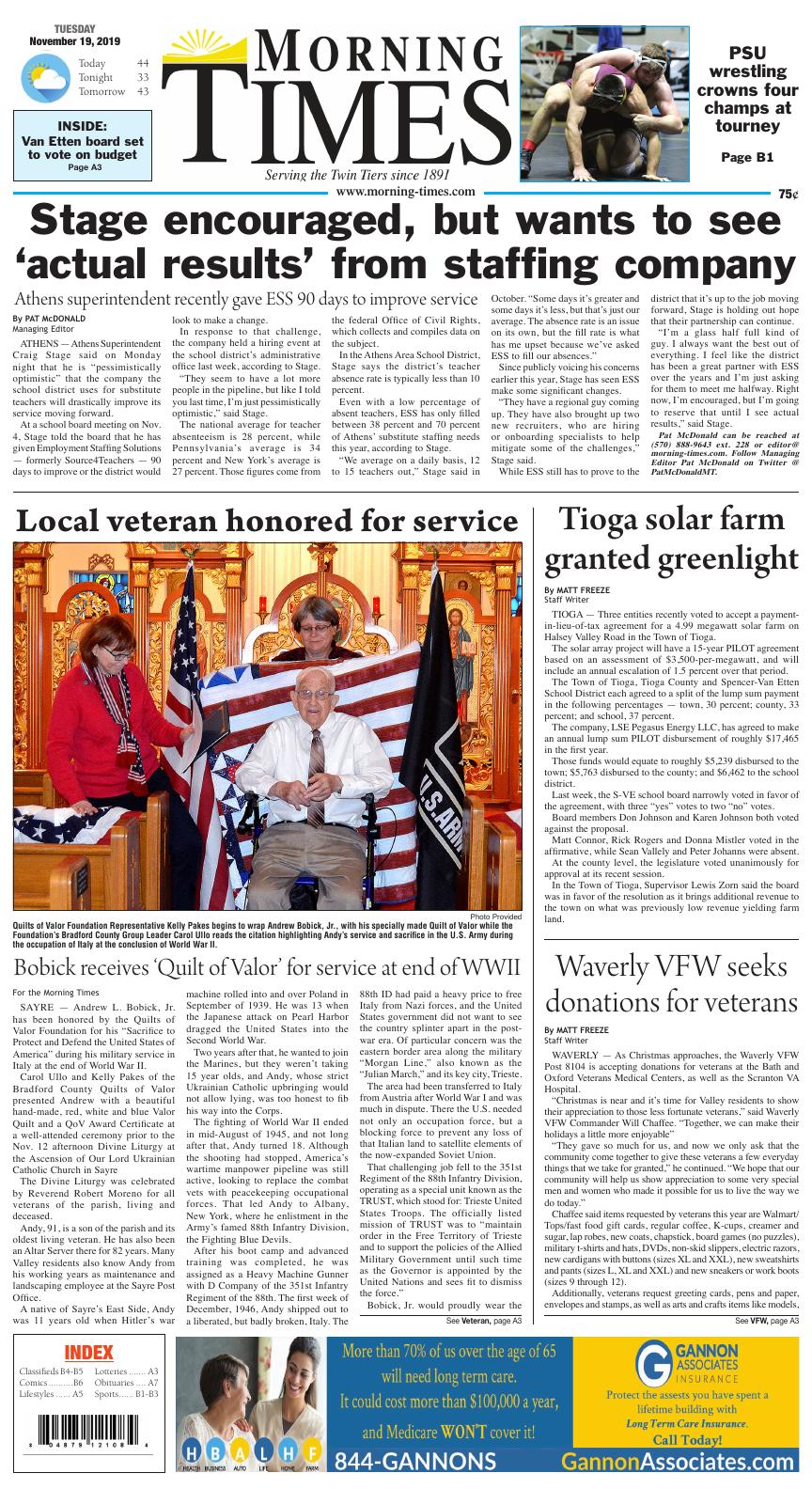 ATHENS — Athens Superintendent Craig Stage said on Monday night that he is “pessimistically optimistic” that the company the school district uses for substitute teachers will drastically improve its service moving forward.

At a school board meeting on Nov. 4, Stage told the board that he has given Employment Staffing Solutions — formerly Source4Teachers — 90 days to improve or the district would look to make a change.

In response to that challenge, the company held a hiring event at the school district’s administrative office last week, according to Stage.

“They seem to have a lot more people in the pipeline, but like I told you last time, I’m just pessimistically optimistic,” said Stage.

The national average for teacher absenteeism is 28 percent, while Pennsylvania’s average is 34 percent and New York’s average is 27 percent. Those figures come from the federal Office of Civil Rights, which collects and compiles data on the subject.

Even with a low percentage of absent teachers, ESS has only filled between 38 percent and 70 percent of Athens’ substitute staffing needs this year, according to Stage.

“We average on a daily basis, 12 to 15 teachers out,” Stage said in October. “Some days it’s greater and some days it’s less, but that’s just our average. The absence rate is an issue on its own, but the fill rate is what has me upset because we’ve asked ESS to fill our absences.”

Since publicly voicing his concerns earlier this year, Stage has seen ESS make some significant changes.

“They have a regional guy coming up. They have also brought up two new recruiters, who are hiring or onboarding specialists to help mitigate some of the challenges,” Stage said.

While ESS still has to prove to the district that it’s up to the job moving forward, Stage is holding out hope that their partnership can continue.

“I’m a glass half full kind of guy. I always want the best out of everything. I feel like the district has been a great partner with ESS over the years and I’m just asking for them to meet me halfway. Right now, I’m encouraged, but I’m going to reserve that until I see actual results,” said Stage.

Quilts of Valor Foundation Representative Kelly Pakes begins to wrap Andrew Bobick, Jr., with his specially made Quilt of Valor while the Foundation’s Bradford County Group Leader Carol Ullo reads the citation highlighting Andy’s service and sacrifice in the U.S. Army during the occupation of Italy at the conclusion of World War II.

SAYRE — Andrew L. Bobick, Jr. has been honored by the Quilts of Valor Foundation for his “Sacrifice to Protect and Defend the United States of America” during his military service in Italy at the end of World War II.

Carol Ullo and Kelly Pakes of the Bradford County Quilts of Valor presented Andrew with a beautiful hand-made, red, white and blue Valor Quilt and a QoV Award Certificate at a well-attended ceremony prior to the Nov. 12 afternoon Divine Liturgy at the Ascension of Our Lord Ukrainian Catholic Church in Sayre

The Divine Liturgy was celebrated by Reverend Robert Moreno for all veterans of the parish, living and deceased.

Andy, 91, is a son of the parish and its oldest living veteran. He has also been an Altar Server there for 82 years. Many Valley residents also know Andy from his working years as maintenance and landscaping employee at the Sayre Post Office.

A native of Sayre’s East Side, Andy was 11 years old when Hitler’s war machine rolled into and over Poland in September of 1939. He was 13 when the Japanese attack on Pearl Harbor dragged the United States into the Second World War.

Two years after that, he wanted to join the Marines, but they weren’t taking 15 year olds, and Andy, whose strict Ukrainian Catholic upbringing would not allow lying, was too honest to fib his way into the Corps.

The fighting of World War II ended in mid-August of 1945, and not long after that, Andy turned 18. Although the shooting had stopped, America’s wartime manpower pipeline was still active, looking to replace the combat vets with peacekeeping occupational forces. That led Andy to Albany, New York, where he enlistment in the Army’s famed 88th Infantry Division, the Fighting Blue Devils.

After his boot camp and advanced training was completed, he was assigned as a Heavy Machine Gunner with D Company of the 351st Infantry Regiment of the 88th. The first week of December, 1946, Andy shipped out to a liberated, but badly broken, Italy. The 88th ID had paid a heavy price to free Italy from Nazi forces, and the United States government did not want to see the country splinter apart in the post-war era. Of particular concern was the eastern border area along the military “Morgan Line,” also known as the “Julian March,” and its key city, Trieste.

The area had been transferred to Italy from Austria after World War I and was much in dispute. There the U.S. needed not only an occupation force, but a blocking force to prevent any loss of that Italian land to satellite elements of the now-expanded Soviet Union.

That challenging job fell to the 351st Regiment of the 88th Infantry Division, operating as a special unit known as the TRUST, which stood for: Trieste United States Troops. The officially listed mission of TRUST was to “maintain order in the Free Territory of Trieste and to support the policies of the Allied Military Government until such time as the Governor is appointed by the United Nations and sees fit to dismiss the force.”

Bobick, Jr. would proudly wear the special TRUST patch on his left sleeve for the next 11 months of his life. He would then be returned from deployment, having attained the rank of Private First Class and earning the WWII Victory Medal and Army Occupation Medal (Italy). He was then assigned to the Infantry base of Fort Benning, Georgia, from where he would be honorably discharged on March 14, 1948.

Members of the Ball-Skerpon Post were on hand for the Quilt of Valor ceremony, as were veterans from the Athens and Waverly American Legions, the Waverly VFW and the War Veterans Association of the NY Southern Tier.

TIOGA — Three entities recently voted to accept a payment-in-lieu-of-tax agreement for a 4.99 megawatt solar farm on Halsey Valley Road in the Town of Tioga.

The solar array project will have a 15-year PILOT agreement based on an assessment of $3,500-per-megawatt, and will include an annual escalation of 1.5 percent over that period.

The Town of Tioga, Tioga County and Spencer-Van Etten School District each agreed to a split of the lump sum payment in the following percentages — town, 30 percent; county, 33 percent; and school, 37 percent.

The company, LSE Pegasus Energy LLC, has agreed to make an annual lump sum PILOT disbursement of roughly $17,465 in the first year.

Last week, the S-VE school board narrowly voted in favor of the agreement, with three “yes” votes to two “no” votes.

Board members Don Johnson and Karen Johnson both voted against the proposal.

Matt Connor, Rick Rogers and Donna Mistler voted in the affirmative, while Sean Vallely and Peter Johanns were absent.

At the county level, the legislature voted unanimously for approval at its recent session.

In the Town of Tioga, Supervisor Lewis Zorn said the board was in favor of the resolution as it brings additional revenue to the town on what was previously low revenue yielding farm land.

WAVERLY — As Christmas approaches, the Waverly VFW Post 8104 is accepting donations for veterans at the Bath and Oxford Veterans Medical Centers, as well as the Scranton VA Hospital.

“Christmas is near and it’s time for Valley residents to show their appreciation to those less fortunate veterans,” said Waverly VFW Commander Will Chaffee. “Together, we can make their holidays a little more enjoyable”

“They gave so much for us, and now we only ask that the community come together to give these veterans a few everyday things that we take for granted,” he continued. “We hope that our community will help us show appreciation to some very special men and women who made it possible for us to live the way we do today.”

Boxes for donations will be behind the Waverly VFW on Broad Street after 2 p.m.

Donations for the Scranton Medical Center can be dropped off at the Sayre American Legion on Cayuta Street in Milltown.

In the memo line on checks, please write “Holiday Account.”

Chaffee said the funds will be used to buy gifts and clothes for the homeless veterans who do not wish to reside in the facilities but go there for treatment.

The deadline for donations is Thursday, Dec. 12.