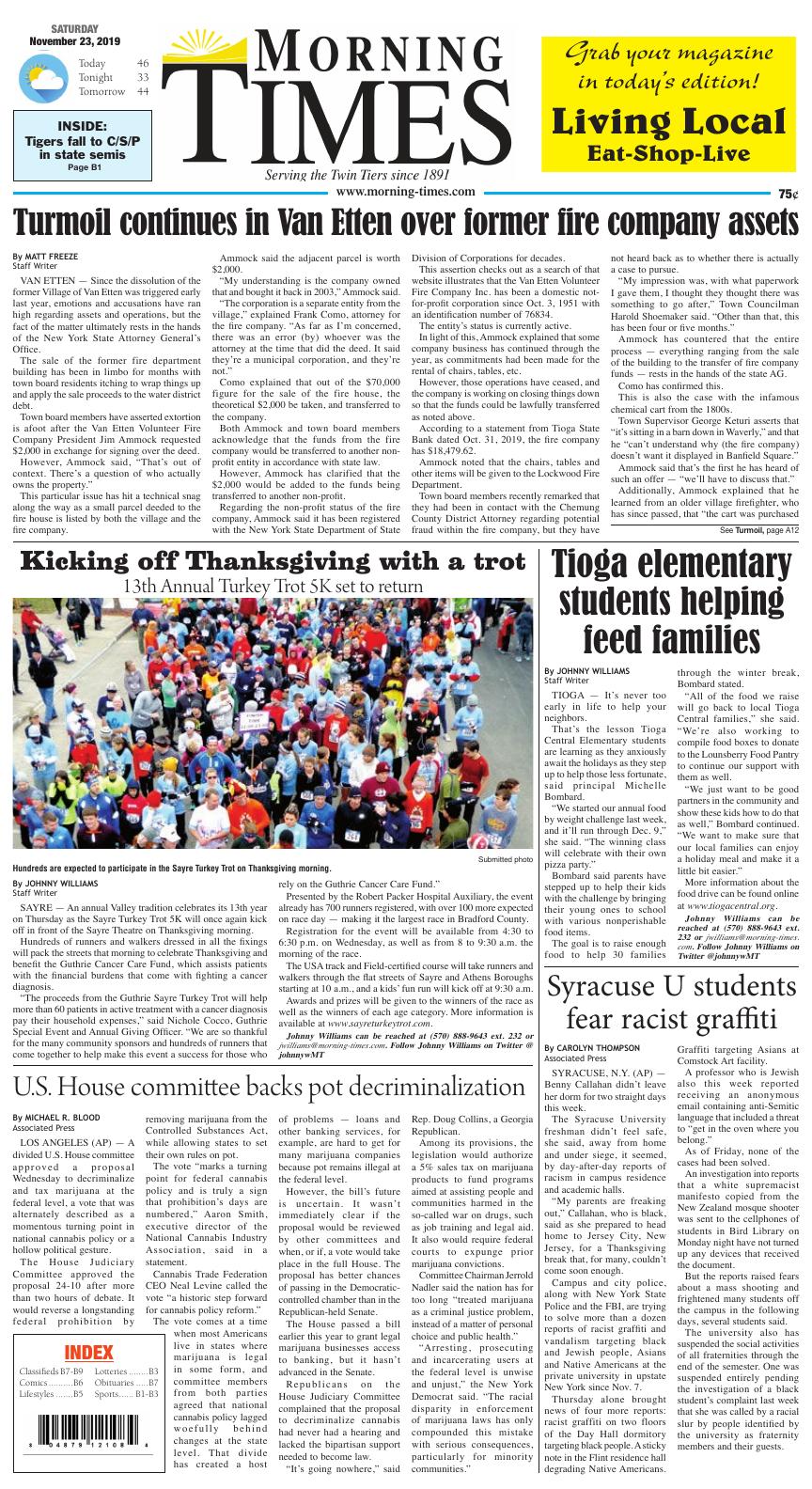 VAN ETTEN — Since the dissolution of the former Village of Van Etten was triggered early last year, emotions and accusations have ran high regarding assets and operations, but the fact of the matter ultimately rests in the hands of the New York State Attorney General’s Office.

The sale of the former fire department building has been in limbo for months with town board residents itching to wrap things up and apply the sale proceeds to the water district debt.

Town board members have asserted extortion is afoot after the Van Etten Volunteer Fire Company President Jim Ammock requested $2,000 in exchange for signing over the deed.

However, Ammock said, “That’s out of context. There’s a question of who actually owns the property.”

This particular issue has hit a technical snag along the way as a small parcel deeded to the fire house is listed by both the village and the fire company.

Ammock said the adjacent parcel is worth $2,000.

“My understanding is the company owned that and bought it back in 2003,” Ammock said.

“The corporation is a separate entity from the village,” explained Frank Como, attorney for the fire company. “As far as I’m concerned, there was an error (by) whoever was the attorney at the time that did the deed. It said they’re a municipal corporation, and they’re not.”

Como explained that out of the $70,000 figure for the sale of the fire house, the theoretical $2,000 be taken, and transferred to the company.

Both Ammock and town board members acknowledge that the funds from the fire company would be transferred to another non-profit entity in accordance with state law.

However, Ammock has clarified that the $2,000 would be added to the funds being transferred to another non-profit.

Regarding the non-profit status of the fire company, Ammock said it has been registered with the New York State Department of State Division of Corporations for decades.

This assertion checks out as a search of that website illustrates that the Van Etten Volunteer Fire Company Inc. has been a domestic not-for-profit corporation since Oct. 3, 1951 with an identification number of 76834.

The entity’s status is currently active.

In light of this, Ammock explained that some company business has continued through the year, as commitments had been made for the rental of chairs, tables, etc.

However, those operations have ceased, and the company is working on closing things down so that the funds could be lawfully transferred as noted above.

Ammock noted that the chairs, tables and other items will be given to the Lockwood Fire Department.

Town board members recently remarked that they had been in contact with the Chemung County District Attorney regarding potential fraud within the fire company, but they have not heard back as to whether there is actually a case to pursue.

“My impression was, with what paperwork I gave them, I thought they thought there was something to go after,” Town Councilman Harold Shoemaker said. “Other than that, this has been four or five months.”

Ammock has countered that the entire process — everything ranging from the sale of the building to the transfer of fire company funds — rests in the hands of the state AG.

Como has confirmed this.

This is also the case with the infamous chemical cart from the 1800s.

Town Supervisor George Keturi asserts that “it’s sitting in a barn down in Waverly,” and that he “can’t understand why (the fire company) doesn’t want it displayed in Banfield Square.”

Ammock said that’s the first he has heard of such an offer — “we’ll have to discuss that.”

Additionally, Ammock explained that he learned from an older village firefighter, who has since passed, that “the cart was purchased from the village in 1972, and it’s been in the company for years. (Company) members restored the wheels and things like that.”

“I always considered it part of the company,” he added.

As it pertains to the whole situation, Ammock said its impossible to “abscond” with funds or assets, as it’s all overseen by the state AG.

“I want to get this thing done with,” Ammock said.

Town board members have expressed the exact same sentiment throughout several board meetings this year.

“You’ve got to give it time,” Ammock said. “With the dissolution of the village, they wanted it done by the end of the year. The village had been in business for well over 100 years. I’d think it’d take a year, not a few months.”

Como’s office has been organizing the last five years of fire company documents, with four years complete so far. When completed, all documents will be sent to the state for review and a final decision.

Town Attorney Aaron Alsheimer did not return a request for comment as of press time. 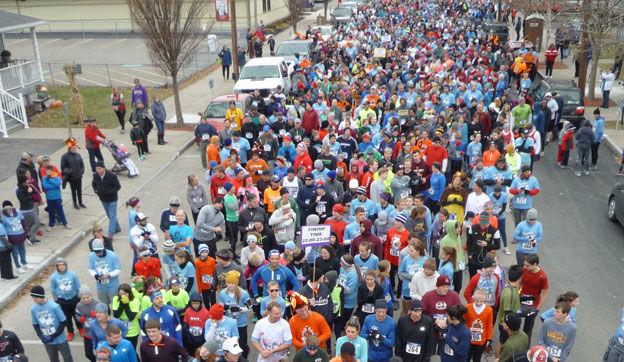 Hundreds are expected to participate in the Sayre Turkey Trot on Thanksgiving morning.

Hundreds are expected to participate in the Sayre Turkey Trot on Thanksgiving morning.

SAYRE — An annual Valley tradition celebrates its 13th year on Thursday as the Sayre Turkey Trot 5K will once again kick off in front of the Sayre Theatre on Thanksgiving morning.

Hundreds of runners and walkers dressed in all the fixings will pack the streets that morning to celebrate Thanksgiving and benefit the Guthrie Cancer Care Fund, which assists patients with the financial burdens that come with fighting a cancer diagnosis.

“The proceeds from the Guthrie Sayre Turkey Trot will help more than 60 patients in active treatment with a cancer diagnosis pay their household expenses,” said Nichole Cocco, Guthrie Special Event and Annual Giving Officer. “We are so thankful for the many community sponsors and hundreds of runners that come together to help make this event a success for those who rely on the Guthrie Cancer Care Fund.”

Presented by the Robert Packer Hospital Auxiliary, the event already has 700 runners registered, with over 100 more expected on race day — making it the largest race in Bradford County.

The USA track and Field-certified course will take runners and walkers through the flat streets of Sayre and Athens Boroughs starting at 10 a.m., and a kids’ fun run will kick off at 9:30 a.m.

Awards and prizes will be given to the winners of the race as well as the winners of each age category. More information is available at www.sayreturkeytrot.com.

TIOGA — It’s never too early in life to help your neighbors.

That’s the lesson Tioga Central Elementary students are learning as they anxiously await the holidays as they step up to help those less fortunate, said principal Michelle Bombard.

“We started our annual food by weight challenge last week, and it’ll run through Dec. 9,” she said. “The winning class will celebrate with their own pizza party.”

Bombard said parents have stepped up to help their kids with the challenge by bringing their young ones to school with various nonperishable food items.

The goal is to raise enough food to help 30 families through the winter break, Bombard stated.

“All of the food we raise will go back to local Tioga Central families,” she said. “We’re also working to compile food boxes to donate to the Lounsberry Food Pantry to continue our support with them as well.

“We just want to be good partners in the community and show these kids how to do that as well,” Bombard continued. “We want to make sure that our local families can enjoy a holiday meal and make it a little bit easier.”

More information about the food drive can be found online at www.tiogacentral.org.