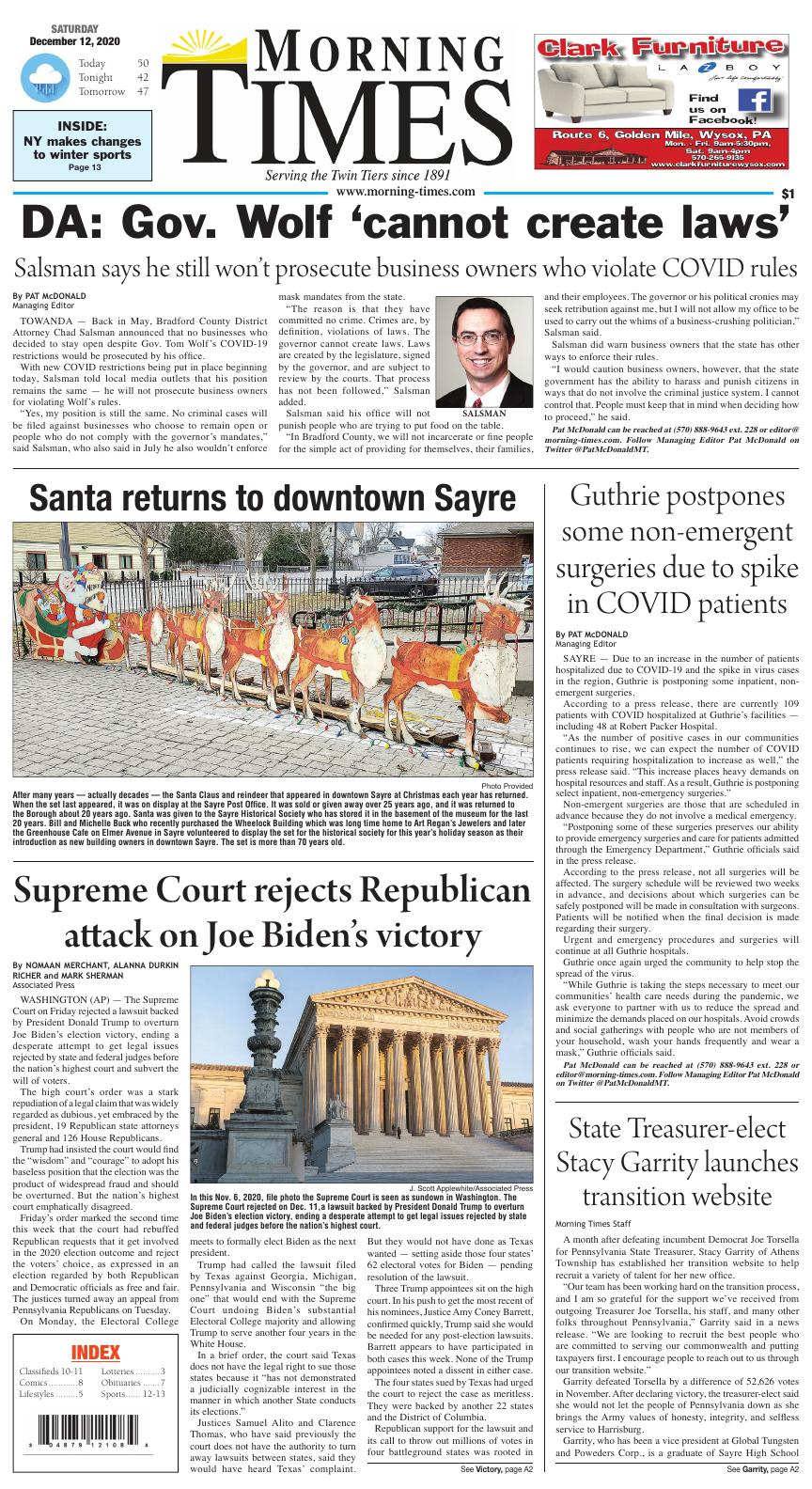 TOWANDA — Back in May, Bradford County District Attorney Chad Salsman announced that no businesses who decided to stay open despite Gov. Tom Wolf’s COVID-19 restrictions would be prosecuted by his office.

With new COVID restrictions being put in place beginning today, Salsman told local media outlets that his position remains the same — he will not prosecute business owners for violating Wolf’s rules.

“Yes, my position is still the same. No criminal cases will be filed against businesses who choose to remain open or people who do not comply with the governor’s mandates,” said Salsman, who also said in July he also wouldn’t enforce mask mandates from the state.

“The reason is that they have committed no crime. Crimes are, by definition, violations of laws. The governor cannot create laws. Laws are created by the legislature, signed by the governor, and are subject to review by the courts. That process has not been followed,” Salsman added.

Salsman said his office will not punish people who are trying to put food on the table.

“In Bradford County, we will not incarcerate or fine people for the simple act of providing for themselves, their families, and their employees. The governor or his political cronies may seek retribution against me, but I will not allow my office to be used to carry out the whims of a business-crushing politician,” Salsman said.

Salsman did warn business owners that the state has other ways to enforce their rules.

“I would caution business owners, however, that the state government has the ability to harass and punish citizens in ways that do not involve the criminal justice system. I cannot control that. People must keep that in mind when deciding how to proceed,” he said.

After many years — actually decades — the Santa Claus and reindeer that appeared in downtown Sayre at Christmas each year has returned. When the set last appeared, it was on display at the Sayre Post Office. It was sold or given away over 25 years ago, and it was returned to the Borough about 20 years ago. Santa was given to the Sayre Historical Society who has stored it in the basement of the museum for the last 20 years. Bill and Michelle Buck who recently purchased the Wheelock Building which was long time home to Art Regan’s Jewelers and later the Greenhouse Cafe on Elmer Avenue in Sayre volunteered to display the set for the historical society for this year’s holiday season as their introduction as new building owners in downtown Sayre. The set is more than 70 years old.

SAYRE — Due to an increase in the number of patients hospitalized due to COVID-19 and the spike in virus cases in the region, Guthrie is postponing some inpatient, non-emergent surgeries.

According to a press release, there are currently 109 patients with COVID hospitalized at Guthrie’s facilities — including 48 at Robert Packer Hospital.

“As the number of positive cases in our communities continues to rise, we can expect the number of COVID patients requiring hospitalization to increase as well,” the press release said. “This increase places heavy demands on hospital resources and staff. As a result, Guthrie is postponing select inpatient, non-emergency surgeries.”

Non-emergent surgeries are those that are scheduled in advance because they do not involve a medical emergency.

“Postponing some of these surgeries preserves our ability to provide emergency surgeries and care for patients admitted through the Emergency Department,” Guthrie officials said in the press release.

According to the press release, not all surgeries will be affected. The surgery schedule will be reviewed two weeks in advance, and decisions about which surgeries can be safely postponed will be made in consultation with surgeons. Patients will be notified when the final decision is made regarding their surgery.

Urgent and emergency procedures and surgeries will continue at all Guthrie hospitals.

Guthrie once again urged the community to help stop the spread of the virus.

“While Guthrie is taking the steps necessary to meet our communities’ health care needs during the pandemic, we ask everyone to partner with us to reduce the spread and minimize the demands placed on our hospitals. Avoid crowds and social gatherings with people who are not members of your household, wash your hands frequently and wear a mask,” Guthrie officials said.

A month after defeating incumbent Democrat Joe Torsella for Pennsylvania State Treasurer, Stacy Garrity of Athens Township has established her transition website to help recruit a variety of talent for her new office.

“Our team has been working hard on the transition process, and I am so grateful for the support we’ve received from outgoing Treasurer Joe Torsella, his staff, and many other folks throughout Pennsylvania,” Garrity said in a news release. “We are looking to recruit the best people who are committed to serving our commonwealth and putting taxpayers first. I encourage people to reach out to us through our transition website.”

Garrity defeated Torsella by a difference of 52,626 votes in November. After declaring victory, the treasurer-elect said she would not let the people of Pennsylvania down as she brings the Army values of honesty, integrity, and selfless service to Harrisburg.

Garrity, who has been a vice president at Global Tungsten and Poweders Corp., is a graduate of Sayre High School who went on to obtain a degree in finance and economics and a certificate from the Cornell University Business Management Institute. She is also a 30-year military veteran with three deployments to Iraq. Before retiring as a colonel in the Army Reserves, Garrity was a two-time recipient of the Bronze Star and received the Legion of Merit.

Garrity is working to make her transition to the treasurer’s office as seamless as possible and is hoping to find people from a variety of backgrounds ready to be part of a team focused on a larger purpose.

Those who are interested can submit their information and resumes at www.garrityforpa/transition or call (717) 205-2068 with any questions.