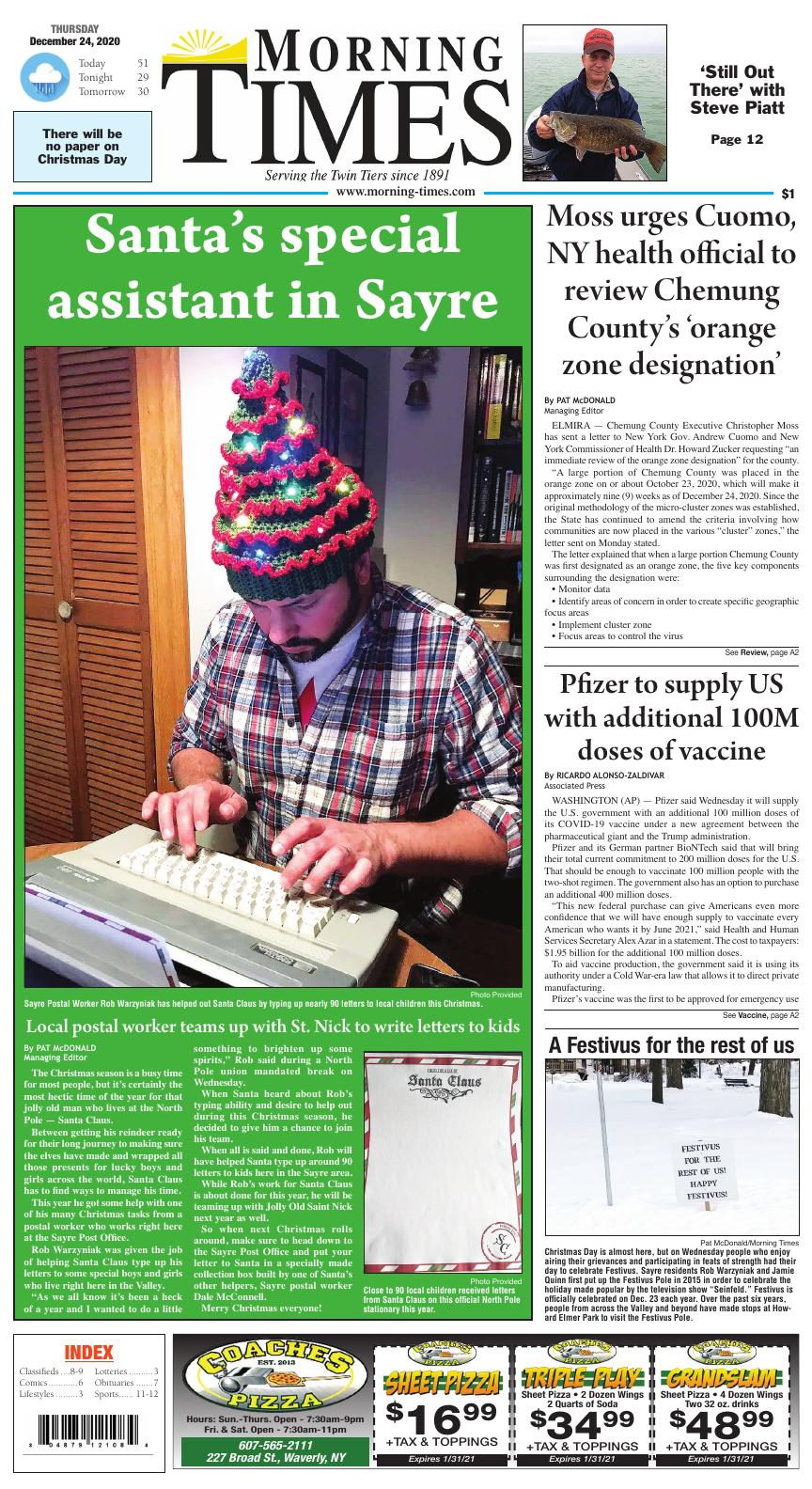 Sayre Postal Worker Rob Warzyniak has helped out Santa Claus by typing up nearly 90 letters to local children this Christmas.

The Christmas season is a busy time for most people, but it’s certainly the most hectic time of the year for that jolly old man who lives at the North Pole — Santa Claus.

Between getting his reindeer ready for their long journey to making sure the elves have made and wrapped all those presents for lucky boys and girls across the world, Santa Claus has to find ways to manage his time.

This year he got some help with one of his many Christmas tasks from a postal worker who works right here at the Sayre Post Office.

Rob Warzyniak was given the job of helping Santa Claus type up his letters to some special boys and girls who live right here in the Valley.

“As we all know it’s been a heck of a year and I wanted to do a little something to brighten up some spirits,” Rob said during a North Pole union mandated break on Wednesday.

When Santa heard about Rob’s typing ability and desire to help out during this Christmas season, he decided to give him a chance to join his team.

When all is said and done, Rob will have helped Santa type up around 90 letters to kids here in the Sayre area.

While Rob’s work for Santa Claus is about done for this year, he will be teaming up with Jolly Old Saint Nick next year as well.

So when next Christmas rolls around, make sure to head down to the Sayre Post Office and put your letter to Santa in a specially made collection box built by one of Santa’s other helpers, Sayre postal worker Dale McConnell. 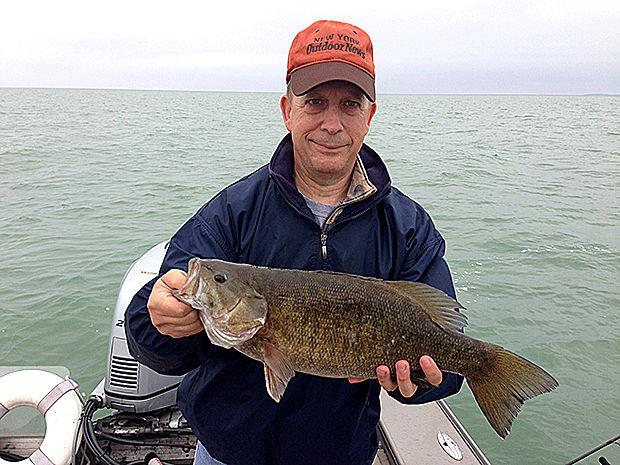 “A large portion of Chemung County was placed in the orange zone on or about October 23, 2020, which will make it approximately nine (9) weeks as of December 24, 2020. Since the original methodology of the micro-cluster zones was established, the State has continued to amend the criteria involving how communities are now placed in the various “cluster” zones,” the letter sent on Monday stated.

The letter explained that when a large portion Chemung County was first designated as an orange zone, the five key components surrounding the designation were:

“Chemung County has continued to implement the strategies outlined in the State microcluster strategy correspondence since October 23, 2020 and we feel at this time, the data, both County and State, demonstrates that the COVID spread has decreased to a manageable level and restrictions outlined in the orange zone designation should be immediately reviewed and replaced with a yellow zone designation,” Moss said in the letter.

The county executive also said that local and county officials have been diligent in making sure the rules and restrictions were followed.

“In addition to the county, local municipalities have conducted thousands of compliance checks within the orange zone designation to ensure that orange zone rules and guidelines are being adhered to,” Moss said.

“Taking these factors into account, it would appear that the orange zone designation in Chemung County is overdue for reevaluation according to the micro-cluster strategy that was supposed to take place every 14 days,” the letter concluded.

Chemung County has had 4,103 confirmed cases of the virus since March, including just 65 cases that are considered active.

The county has lost 64 residents due to complications from COVID. There are currently 46 individuals hospitalized as they battle the virus, while 3,974 people have recovered. 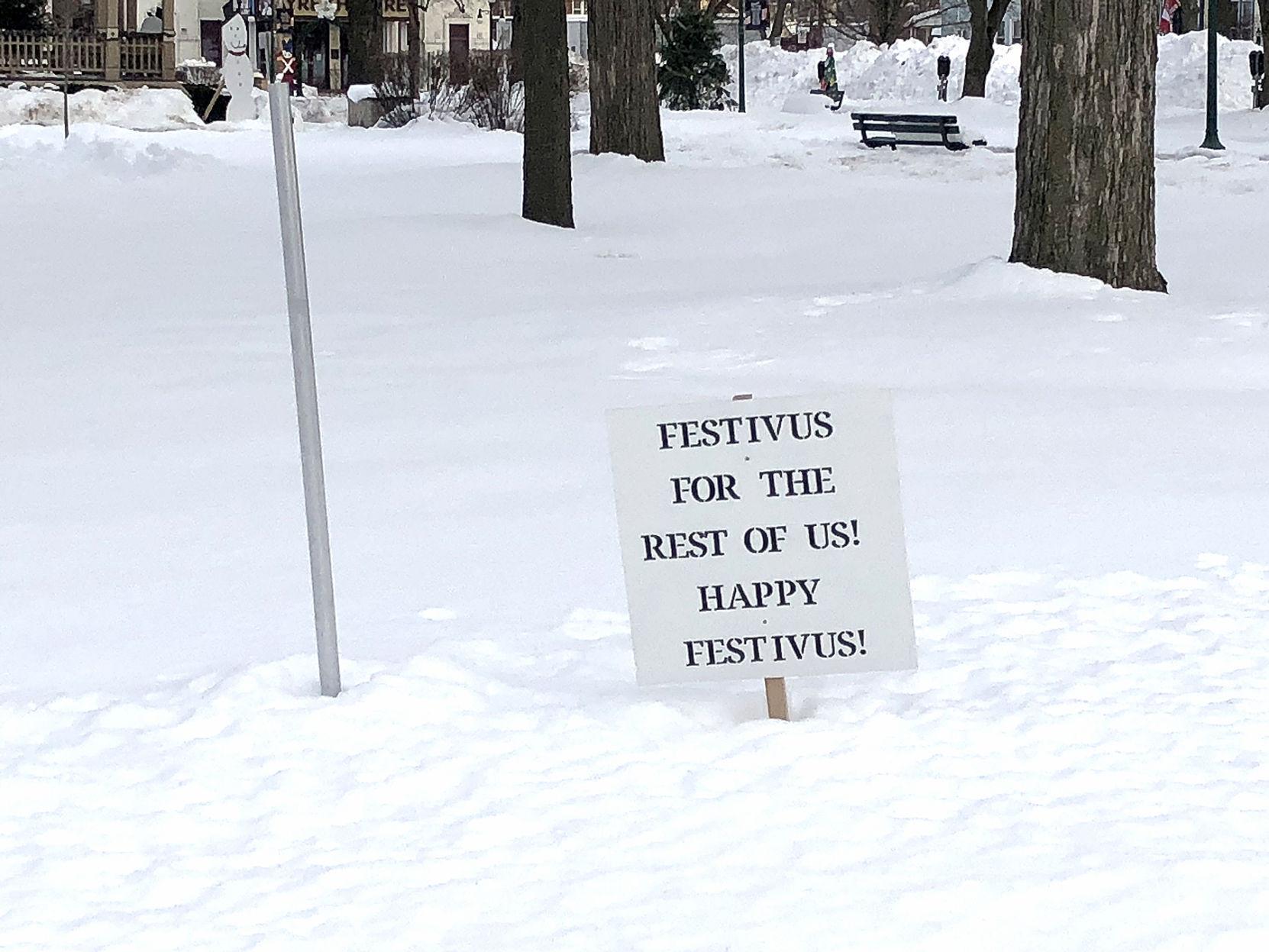 Christmas Day is almost here, but on Wednesday people who enjoy airing their grievances and participating in feats of strength had their day to celebrate Festivus. Sayre residents Rob Warzyniak and Jamie Quinn first put up the Festivus Pole in 2015 in order to celebrate the holiday made popular by the television show “Seinfeld.” Festivus is officially celebrated on Dec. 23 each year. Over the past six years, people from across the Valley and beyond have made stops at Howard Elmer Park to visit the Festivus Pole.