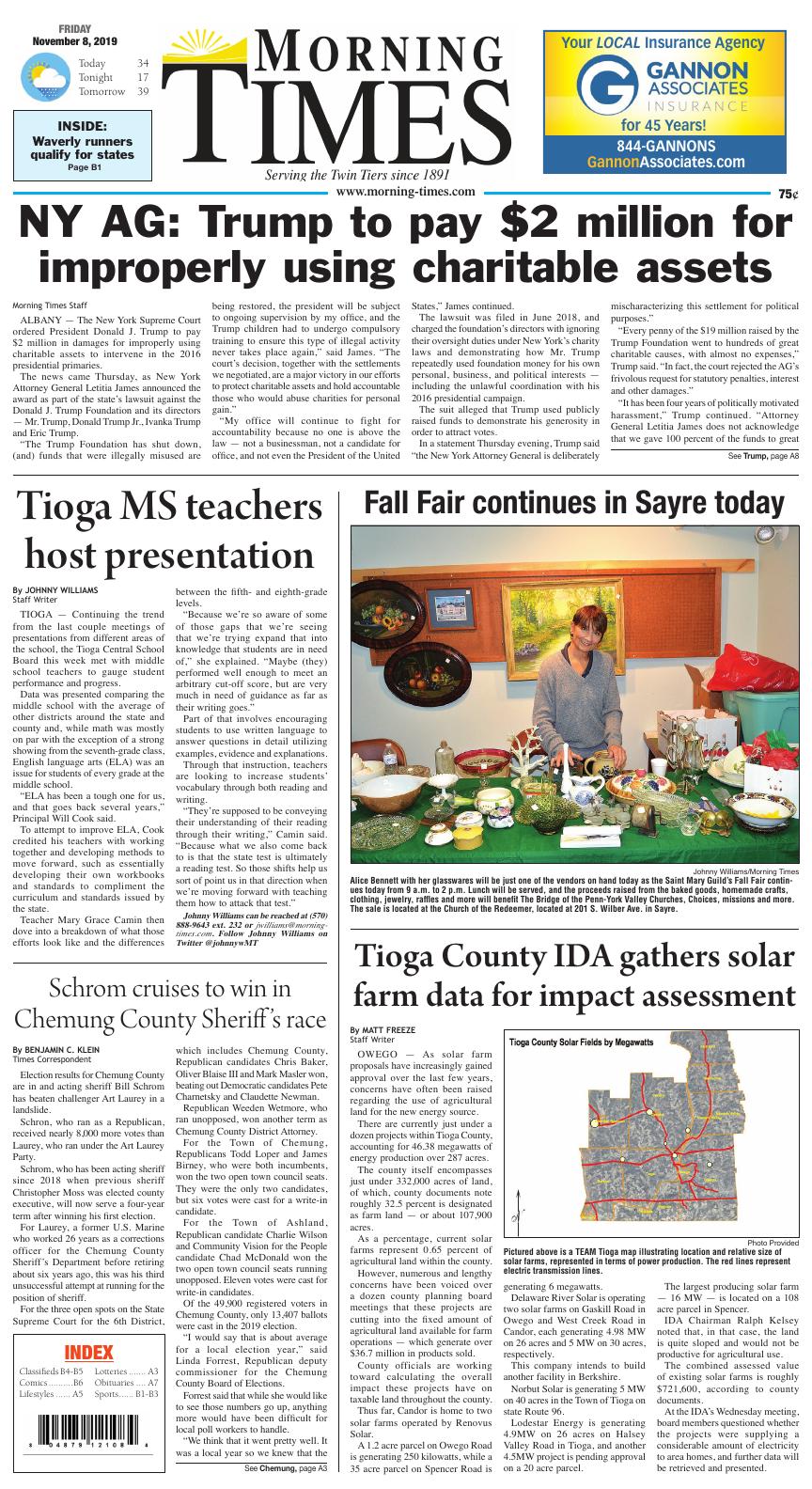 “The Trump Foundation has shut down, (and) funds that were illegally misused are being restored, the president will be subject to ongoing supervision by my office, and the Trump children had to undergo compulsory training to ensure this type of illegal activity never takes place again,” said James. “The court’s decision, together with the settlements we negotiated, are a major victory in our efforts to protect charitable assets and hold accountable those who would abuse charities for personal gain.”

“My office will continue to fight for accountability because no one is above the law — not a businessman, not a candidate for office, and not even the President of the United States,” James continued.

The lawsuit was filed in June 2018, and charged the foundation’s directors with ignoring their oversight duties under New York’s charity laws and demonstrating how Mr. Trump repeatedly used foundation money for his own personal, business, and political interests — including the unlawful coordination with his 2016 presidential campaign.

The suit alleged that Trump used publicly raised funds to demonstrate his generosity in order to attract votes.

In a statement Thursday evening, Trump said “the New York Attorney General is deliberately mischaracterizing this settlement for political purposes.”

“Every penny of the $19 million raised by the Trump Foundation went to hundreds of great charitable causes, with almost no expenses,” Trump said. “In fact, the court rejected the AG’s frivolous request for statutory penalties, interest and other damages.”

“It has been four years of politically motivated harassment,” Trump continued. “Attorney General Letitia James does not acknowledge that we gave 100 percent of the funds to great charities (and) refuses to investigate the Clinton Foundation with all of its problems.”

Trump noted that this lawsuit found “some small technical violations, such as not keeping board minutes.”

James said Trump and his campaign spent $500,000 at a campaign rally in the days leading up to the first primary election in the nation, the Iowa caucuses, then took credit for all $2.8 million in grants the foundation made.

“Mr. Trump breached his fiduciary duty to the Foundation and that waste occurred to the Foundation,” said Justice Saliann Scarpulla. “Mr. Trump’s fiduciary duty breaches included allowing his campaign to orchestrate the fundraiser; allowing his campaign, instead of the foundation, to direct distribution of the funds; and using the fundraiser and distribution of the funds to further Mr. Trump’s political campaign.”

In total, the Office of the Attorney General has entered into four stipulation agreements as part of this settlement.

The first stipulation took effect in December 2018 when the Trump Foundation agreed to shutter its doors and dissolve under court supervision.

In October 2019, the Office of the Attorney General entered three additional stipulations.

One stipulation ensures that the foundation’s remaining assets will go to reputable charities approved by Attorney General James and that have no connection to Mr. Trump or his family members.

Another stipulation ensures that Donald Trump, Jr., Ivanka Trump, and Eric Trump received training on the duties of officers and directors of charities so that they cannot allow the illegal activity they oversaw at the Trump Foundation to take place again, James said.

The third stipulation includes 19 paragraphs of factual admissions by Trump and the Foundation of illegal activity, James said.

Among those, James said, Trump admitted that the foundation’s board of directors — of which he was chair — failed to meet, failed to provide oversight over the foundation, and failed to adopt legally required policies and procedures.

Trump also admitted that these failures “contributed to the foundation’s participation” in seven related party transactions described in the settlement document and in the Attorney General’s lawsuit, James said.

The $1.78 million in assets currently being held by the Trump Foundation, along with the $2 million in damages to be paid by Mr. Trump, will be disbursed equally to eight charities: Army Emergency Relief, the Children’s Aid Society, Citymeals-on-Wheels, Give an Hour, Martha’s Table, United Negro College Fund, United Way of National Capital Area, and the U.S. Holocaust Memorial Museum. 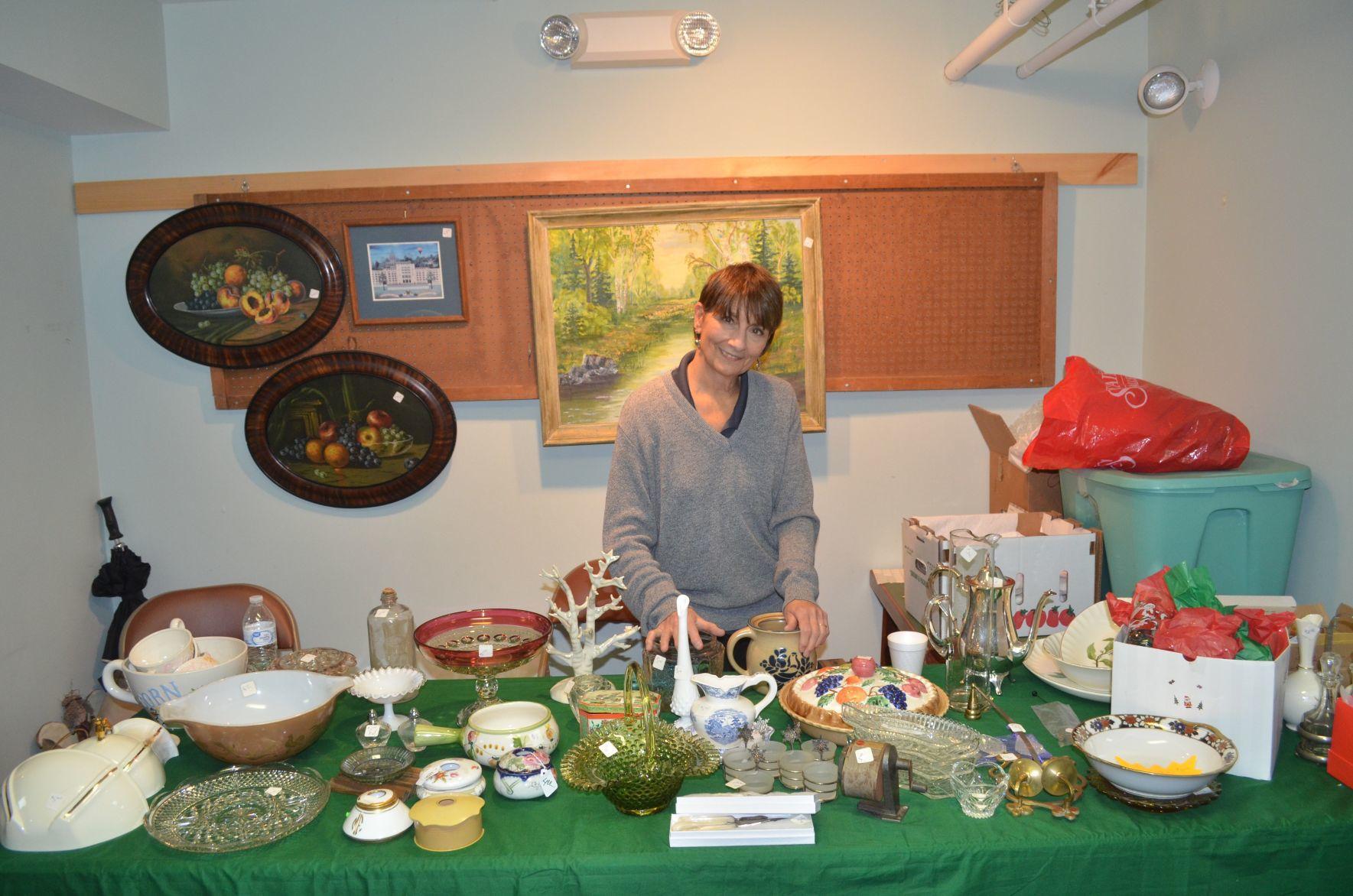 Alice Bennett with her glasswares will be just one of the vendors on hand today as the Saint Mary Guild’s Fall Fair continues today from 9 a.m. to 2 p.m. Lunch will be served, and the proceeds raised from the baked goods, homemade crafts, clothing, jewelry, raffles and more will benefit The Bridge of the Penn-York Valley Churches, Choices, missions and more. The sale is located at the Church of the Redeemer, located at 201 S. Wilber Ave. in Sayre.

OWEGO — As solar farm proposals have increasingly gained approval over the last few years, concerns have often been raised regarding the use of agricultural land for the new energy source.

There are currently just under a dozen projects within Tioga County, accounting for 46.38 megawatts of energy production over 287 acres.

The county itself encompasses just under 332,000 acres of land, of which, county documents note roughly 32.5 percent is designated as farm land — or about 107,900 acres.

As a percentage, current solar farms represent 0.65 percent of agricultural land within the county.

However, numerous and lengthy concerns have been voiced over a dozen county planning board meetings that these projects are cutting into the fixed amount of agricultural land available for farm operations — which generate over $36.7 million in products sold.

County officials are working toward calculating the overall impact these projects have on taxable land throughout the county.

Delaware River Solar is operating two solar farms on Gaskill Road in Owego and West Creek Road in Candor, each generating 4.98 MW on 26 acres and 5 MW on 30 acres, respectively.

This company intends to build another facility in Berkshire.

Norbut Solar is generating 5 MW on 40 acres in the Town of Tioga on state Route 96.

Lodestar Energy is generating 4.9MW on 26 acres on Halsey Valley Road in Tioga, and another 4.5MW project is pending approval on a 20 acre parcel.

The largest producing solar farm — 16 MW — is located on a 108 acre parcel in Spencer.

IDA Chairman Ralph Kelsey noted that, in that case, the land is quite sloped and would not be productive for agricultural use.

The combined assessed value of existing solar farms is roughly $721,600, according to county documents.

At the IDA’s Wednesday meeting, board members questioned whether the projects were supplying a considerable amount of electricity to area homes, and further data will be retrieved and presented.

TIOGA — Continuing the trend from the last couple meetings of presentations from different areas of the school, the Tioga Central School Board this week met with middle school teachers to gauge student performance and progress.

Data was presented comparing the middle school with the average of other districts around the state and county and, while math was mostly on par with the exception of a strong showing from the seventh-grade class, English language arts (ELA) was an issue for students of every grade at the middle school.

“ELA has been a tough one for us, and that goes back several years,” Principal Will Cook said.

To attempt to improve ELA, Cook credited his teachers with working together and developing methods to move forward, such as essentially developing their own workbooks and standards to compliment the curriculum and standards issued by the state.

Teacher Mary Grace Camin then dove into a breakdown of what those efforts look like and the differences between the fifth- and eighth-grade levels.

“Because we’re so aware of some of those gaps that we’re seeing that we’re trying expand that into knowledge that students are in need of,” she explained. “Maybe (they) performed well enough to meet an arbitrary cut-off score, but are very much in need of guidance as far as their writing goes.”

Part of that involves encouraging students to use written language to answer questions in detail utilizing examples, evidence and explanations.

Through that instruction, teachers are looking to increase students’ vocabulary through both reading and writing.

“They’re supposed to be conveying their understanding of their reading through their writing,” Camin said. “Because what we also come back to is that the state test is ultimately a reading test. So those shifts help us sort of point us in that direction when we’re moving forward with teaching them how to attack that test.”

Election results for Chemung County are in and acting sheriff Bill Schrom has beaten challenger Art Laurey in a landslide.

Schron, who ran as a Republican, received nearly 8,000 more votes than Laurey, who ran under the Art Laurey Party.

Schrom, who has been acting sheriff since 2018 when previous sheriff Christopher Moss was elected county executive, will now serve a four-year term after winning his first election.

For Laurey, a former U.S. Marine who worked 26 years as a corrections officer for the Chemung County Sheriff’s Department before retiring about six years ago, this was his third unsuccessful attempt at running for the position of sheriff.

For the Town of Chemung, Republicans Todd Loper and James Birney, who were both incumbents, won the two open town council seats. They were the only two candidates, but six votes were cast for a write-in candidate.

“I would say that is about average for a local election year,” said Linda Forrest, Republican deputy commissioner for the Chemung County Board of Elections.

Forrest said that while she would like to see those numbers go up, anything more would have been difficult for local poll workers to handle.

“We think that it went pretty well. It was a local year so we knew that the numbers weren’t going to be a lot. But it was very smooth in our office, and we did not get a lot of calls from people asking where to vote because it seems that everyone knew where to go,” Forrest said.

In the first year of early voting, Forrest said that 564 residents took advantage and voted prior to Nov. 5.

“It was our first time doing this so we didn’t know what to expect. We expect that number to go up as people realize we have that service,” Forrest said.

Forrest added that it does not appear that early voting increased the total number of voters.

“It was only the first year though. Everyone would like to see those numbers go up, we work all year for this.” Forrest said.