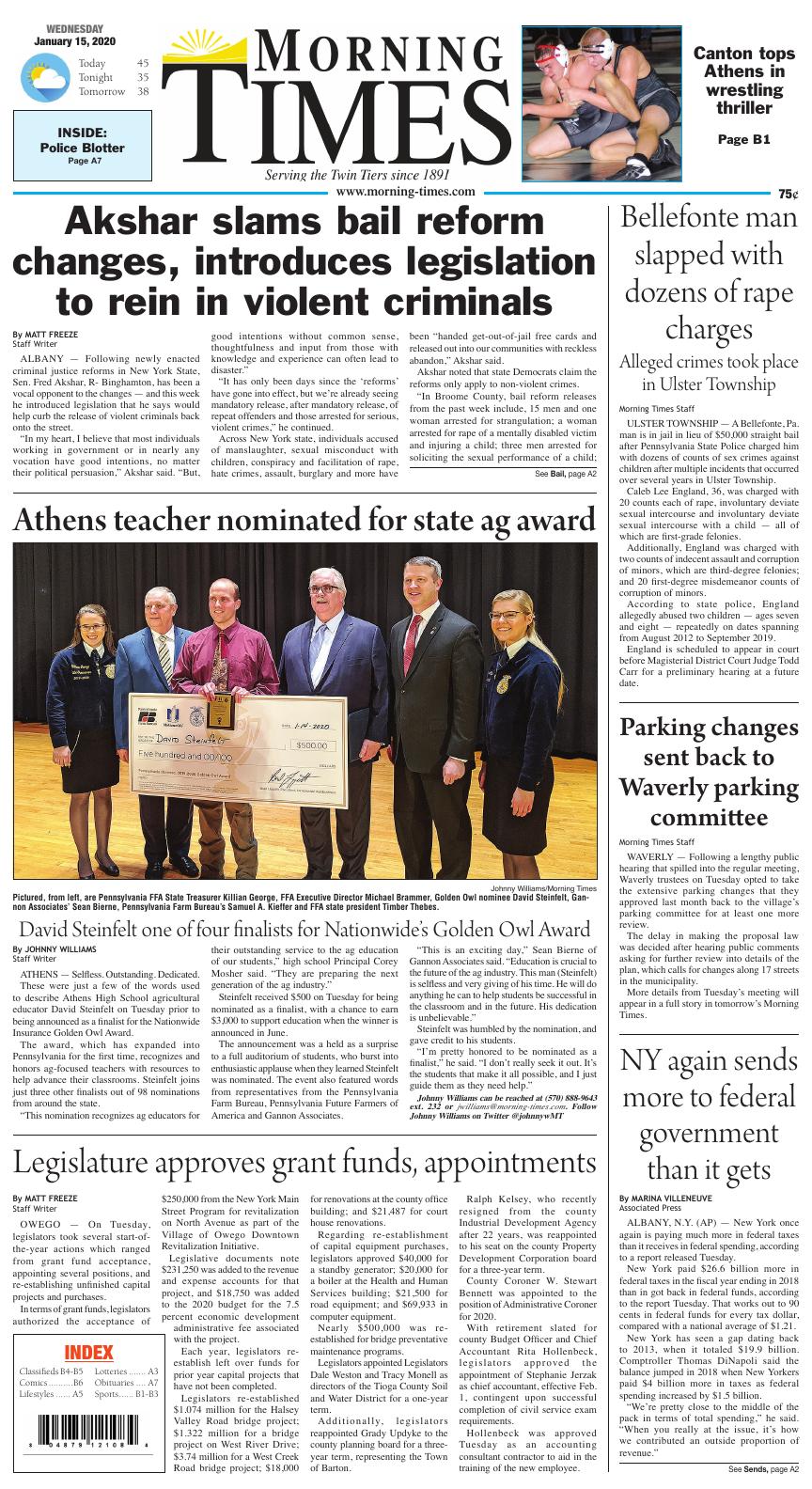 ALBANY — Following newly enacted criminal justice reforms in New York State, Sen. Fred Akshar, R- Binghamton, has been a vocal opponent to the changes — and this week he introduced legislation that he says would help curb the release of violent criminals back onto the street.

“In my heart, I believe that most individuals working in government or in nearly any vocation have good intentions, no matter their political persuasion,” Akshar said. “But, good intentions without common sense, thoughtfulness and input from those with knowledge and experience can often lead to disaster.”

Across New York state, individuals accused of manslaughter, sexual misconduct with children, conspiracy and facilitation of rape, hate crimes, assault, burglary and more have been “handed get-out-of-jail free cards and released out into our communities with reckless abandon,” Akshar said.

Akshar noted that state Democrats claim the reforms only apply to non-violent crimes.

Further, he noted that, statewide, the following “get-out-of-jail-free cards” have been given to a man charged with manslaughter in the strangulation-and-stabbing death of a woman in Albany; a man charged with predatory sexual assault, rape, and endangering the welfare of a child in Seneca County; a man charged with driving drunk and killing a pedestrian in Harlem; a woman arrested and released multiple times over a five day period of attacks and alleged hate crimes, including slapping three Jewish women while screaming anti-Semitic tirades in Brooklyn; a man charged with driving illegally, accidentally killing a 35-year-old mother of three and fleeing the scene of the crime in Rockland County; and a man arrested in connection with six burglaries, who committed another burglary within hours of release on Long Island.

“Much of the momentum behind the need for bail reform came from the story of a young man named Kalief Browder, who was arrested for allegedly stealing a backpack, but spent three years incarcerated at Rikers Island due to the backlogged Bronx criminal court system and the fact that he could not afford bail,” Akshar explained. “This ordeal eventually led Kalief Browder to take his own life at 22 years old.”

Akshar acknowledged the Constitutional right for a quick and speedy trial but likened the above legislation to “performing brain surgery with a jackhammer.”

Other states like New Jersey, California and Illinois have limited the use of bail.

“New York is one of the few states to abolish bail for many crimes without also giving state judges the discretion to consider whether a person poses a threat to public safety in deciding whether to hold them,” Akshar said, adding that the changes create a “revolving door.”

For example, Akshar explained that if a defendant fails to appear in court, they may be arrested and then released without bail. Then they are provided a sheet of paper with the date of the next court appearance.

If the defendant fails to appear again, they still cannot be issued a warrant without sending a further letter, phone call or text.

If they fail to appear in court again, unless it can be shown that their lack of appearance was willful and persistent, they still cannot have their bail set, he said.

Resultantly, Akshar introduced legislation to restore bail for the violent and dangerous crimes that require it — including manslaughter, criminally negligent homicide, reckless assault of a child, facilitating a sexual performance by a child, menacing, stalking and more.

Additionally, a second piece of legislation was introduced to remove the option for cashless bail if the arrested individual was been convicted of a felony in the past 10 years.

“All men and women may be created equal, but all crimes are not,” Akshar said. “For justice to truly prevail, our judicial system must be allowed to handle dangerous crimes on a case-by-case basis.”

“Otherwise, New York will continue to put criminals before the safety law-abiding citizens in our community,” he added.

These were just a few of the words used to describe Athens High School agricultural educator David Steinfelt on Tuesday prior to being announced as a finalist for the Nationwide Insurance Golden Owl Award.

The award, which has expanded into Pennsylvania for the first time, recognizes and honors ag-focused teachers with resources to help advance their classrooms. Steinfelt joins just three other finalists out of 98 nominations from around the state.

“This nomination recognizes ag educators for their outstanding service to the ag education of our students,” high school Principal Corey Mosher said. “They are preparing the next generation of the ag industry.”

Steinfelt received $500 on Tuesday for being nominated as a finalist, with a chance to earn $3,000 to support education when the winner is announced in June.

The announcement was a held as a surprise to a full auditorium of students, who burst into enthusiastic applause when they learned Steinfelt was nominated. The event also featured words from representatives from the Pennsylvania Farm Bureau, Pennsylvania Future Farmers of America and Gannon Associates.

“This is an exciting day,” Sean Bierne of Gannon Associates said. “Education is crucial to the future of the ag industry. This man (Steinfelt) is selfless and very giving of his time. He will do anything he can to help students be successful in the classroom and in the future. His dedication is unbelievable.”

Steinfelt was humbled by the nomination, and gave credit to his students.

“I’m pretty honored to be nominated as a finalist,” he said. “I don’t really seek it out. It’s the students that make it all possible, and I just guide them as they need help.”

In terms of grant funds, legislators authorized the acceptance of $250,000 from the New York Main Street Program for revitalization on North Avenue as part of the Village of Owego Downtown Revitalization Initiative.

Legislative documents note $231,250 was added to the revenue and expense accounts for that project, and $18,750 was added to the 2020 budget for the 7.5 percent economic development administrative fee associated with the project.

Each year, legislators re-establish left over funds for prior year capital projects that have not been completed.

Regarding re-establishment of capital equipment purchases, legislators approved $40,000 for a standby generator; $20,000 for a boiler at the Health and Human Services building; $21,500 for road equipment; and $69,933 in computer equipment.

Legislators appointed Legislators Dale Weston and Tracy Monell as directors of the Tioga County Soil and Water District for a one-year term.

Additionally, legislators reappointed Grady Updyke to the county planning board for a three-year term, representing the Town of Barton.

Ralph Kelsey, who recently resigned from the county Industrial Development Agency after 22 years, was reappointed to his seat on the county Property Development Corporation board for a three-year term.

County Coroner W. Stewart Bennett was appointed to the position of Administrative Coroner for 2020.

Hollenbeck was approved Tuesday as an accounting consultant contractor to aid in the training of the new employee.

ULSTER TOWNSHIP — A Bellefonte, Pa. man is in jail in lieu of $50,000 straight bail after Pennsylvania State Police charged him with dozens of counts of sex crimes against children after multiple incidents that occurred over several years in Ulster Township.

England is scheduled to appear in court before Magisterial District Court Judge Todd Carr for a preliminary hearing at a future date.

WAVERLY — Following a lengthy public hearing that spilled into the regular meeting, Waverly trustees on Tuesday opted to take the extensive parking changes that they approved last month back to the village’s parking committee for at least one more review.

The delay in making the proposal law was decided after hearing public comments asking for further review into details of the plan, which calls for changes along 17 streets in the municipality.

More details from Tuesday’s meeting will appear in a full story in tomorrow’s Morning Times.

ALBANY, N.Y. (AP) — New York once again is paying much more in federal taxes than it receives in federal spending, according to a report released Tuesday.

New York paid $26.6 billion more in federal taxes in the fiscal year ending in 2018 than in got back in federal funds, according to the report Tuesday. That works out to 90 cents in federal funds for every tax dollar, compared with a national average of $1.21.

New York has seen a gap dating back to 2013, when it totaled $19.9 billion. Comptroller Thomas DiNapoli said the balance jumped in 2018 when New Yorkers paid $4 billion more in taxes as federal spending increased by $1.5 billion.

“We’re pretty close to the middle of the pack in terms of total spending,” he said. “When you really at the issue, it’s how we contributed an outside proportion of revenue.”

DiNapoli said the ongoing trend makes it critical that the upcoming 2020 census is accurate and maximizes the state’s population count.

“It’s an important reminder for everyone in New York, that New York contributes a great deal to Washington and the federal government and we should certainly be sure that we can can fight anyway we can to maximize the return we have,” he said.

New York is one of just seven states that sends more to the federal government than it receives, according to the comptroller’s report. New York saw a per capita deficit of $1,363, which is based on the gap between federal taxes and funding per each New Yorker. Massachusetts had a $1,419 per capita deficit while New Jersey’s ranked worst in the nation at $2,792.

New York is also home to 6% of the nation’s population and receives a relatively high level of federal spending for Medicaid and mass transit. Meanwhile, New York taxes are significantly higher than the national per capita, according to DiNapoli’s report, which said that’s largely because of individual income taxes.