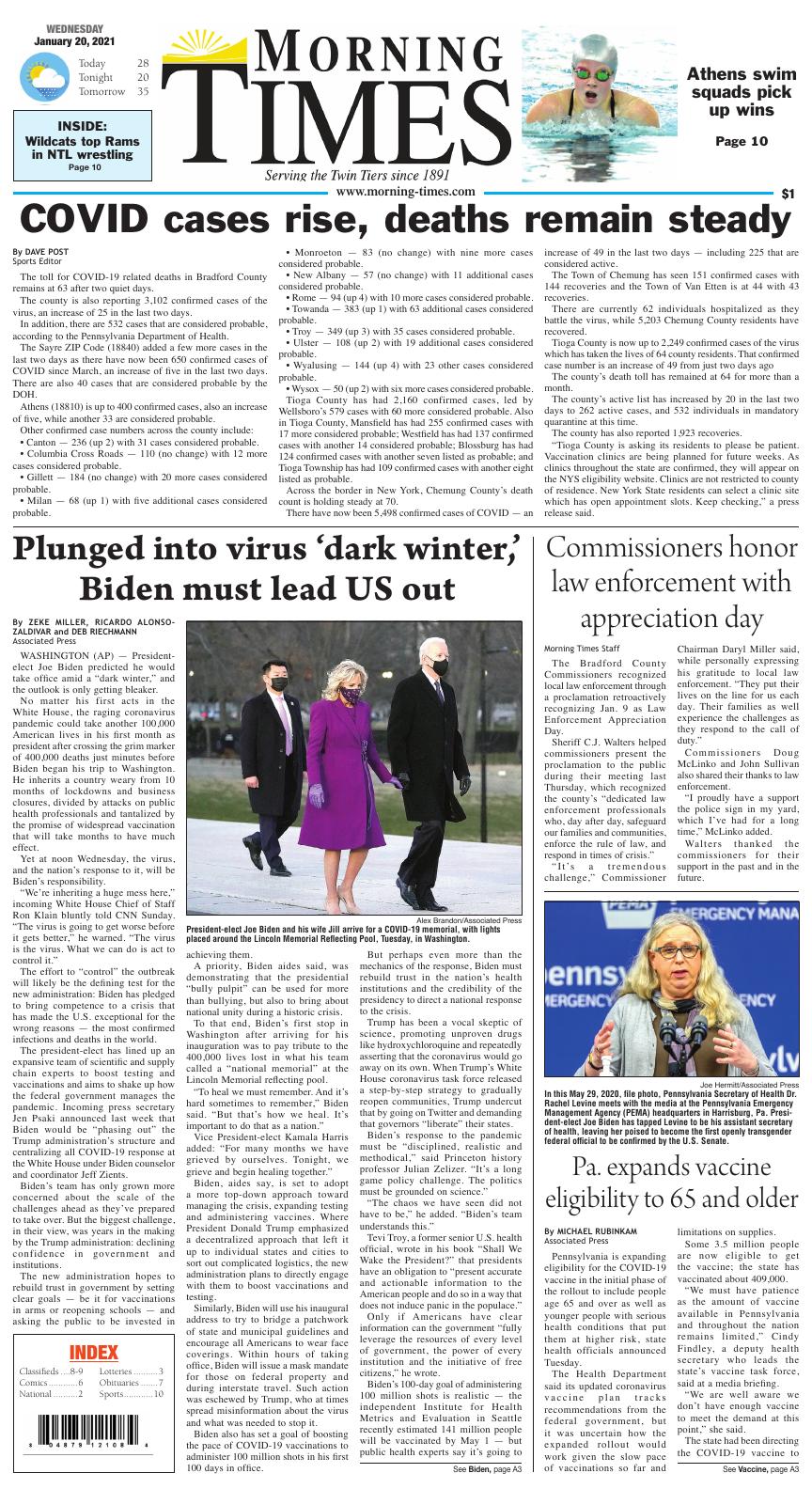 The toll for COVID-19 related deaths in Bradford County has increased by two over the last week to 65.

The county is also reporting 3,263 confirmed cases of the virus, an increase of 161 in the last seven days.

In addition, there are 560 cases that are considered probable, according to the Pennsylvania Department of Health.

The Sayre ZIP Code (18840) added 34 more cases in the last seven days as there have now been 684 confirmed cases of COVID since March. There are also 47 cases that are considered probable by the DOH.

Other confirmed case numbers across the county include:

Across the border in New York, Chemung County’s death count has risen by two in the last week to 72.

There have now been 5,805 confirmed cases of COVID — an increase of 307 in the last week — including 109 that are considered active.

The Town of Chemung has seen 170 confirmed cases with 164 recoveries and the Town of Van Etten is at 50 with 49 recoveries.

There are currently 58 individuals hospitalized as they battle the virus, while 5,624 Chemung County residents have recovered.

The county’s death toll has remained at 64 for more than a month.

The county’s active list has increased by 29 in the last two days to 291 active cases, and 487 individuals are in mandatory quarantine at this time.

The county has also reported 1,923 recoveries.

Tioga County, N.Y. is asking its residents to please be patient. “NYS has modified ‘where to go’ vaccine sites to align with priority population assignments. Eligibility determines site. Seniors are directed to visit the NYS eligibility website. Other populations should contact designated sites. Keep checking our website (https://am-i-eligible.covid19vaccine.health.gov/) for detailed information, which is updated regularly,” a press release said.

Sheriff C.J. Walters helped commissioners present the proclamation to the public during their meeting last Thursday, which recognized the county’s “dedicated law enforcement professionals who, day after day, safeguard our families and communities, enforce the rule of law, and respond in times of crisis.”

“It’s a tremendous challenge,” Commissioner Chairman Daryl Miller said, while personally expressing his gratitude to local law enforcement. “They put their lives on the line for us each day. Their families as well experience the challenges as they respond to the call of duty.”

Commissioners Doug McLinko and John Sullivan also shared their thanks to law enforcement.

“I proudly have a support the police sign in my yard, which I’ve had for a long time,” McLinko added.

Walters thanked the commissioners for their support in the past and in the future.