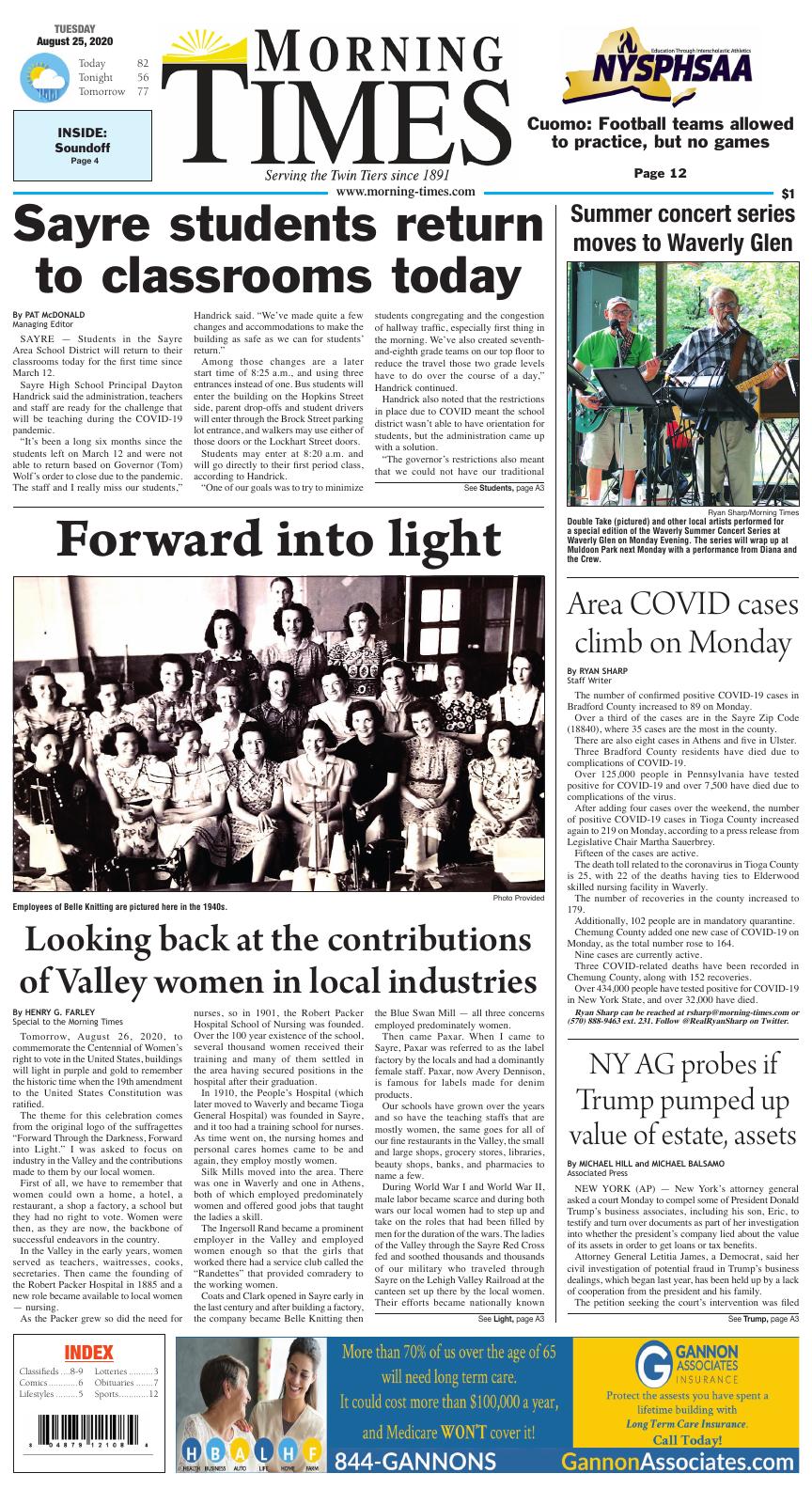 SAYRE — Students in the Sayre Area School District will return to their classrooms today for the first time since March 12.

Sayre High School Principal Dayton Handrick said the administration, teachers and staff are ready for the challenge that will be teaching during the COVID-19 pandemic.

“It’s been a long six months since the students left on March 12 and were not able to return based on Governor (Tom) Wolf’s order to close due to the pandemic. The staff and I really miss our students,” Handrick said. “We’ve made quite a few changes and accommodations to make the building as safe as we can for students’ return.”

Among those changes are a later start time of 8:25 a.m., and using three entrances instead of one. Bus students will enter the building on the Hopkins Street side, parent drop-offs and student drivers will enter through the Brock Street parking lot entrance, and walkers may use either of those doors or the Lockhart Street doors.

Students may enter at 8:20 a.m. and will go directly to their first period class, according to Handrick.

“One of our goals was to try to minimize students congregating and the congestion of hallway traffic, especially first thing in the morning. We’ve also created seventh-and-eighth grade teams on our top floor to reduce the travel those two grade levels have to do over the course of a day,” Handrick continued.

Handrick also noted that the restrictions in place due to COVID meant the school district wasn’t able to have orientation for students, but the administration came up with a solution.

“The governor’s restrictions also meant that we could not have our traditional orientation/open house for seventh graders and new students. So the staff and I put together a video for those students,” Handrick said. “It’s on our website and Facebook pages. It’s not the same as being here in person, but this year is going to be about making adaptations and staying safe. Students may view their schedules through our family access portal on our website and there are directions there for families that need assistance with that.”

Handrick also pointed out that the building will “look a little differently this year.”

“We have shields in place at different points of contact throughout the building, markings in the hallways to divide traffic, and markings to remind students to promote social distancing while moving around the building,” Handrick said.

“Staff have worked hard to space out things in their classrooms. We’re just all going to need to be a little patient and flexible as we deal with our new normal. Things will likely change as we move forward,” he continued. “I just know that we want our student body back in the building. My challenge to them this year will be to protect themselves, protect others and that will protect our school. They’ll rise to the challenge. Our students always do.”

News
Forward into light: Looking back at the contributions of women in local industries
editor / Photo Provided

Employees of Belle Knitting are pictured here in the 1940s.

Tomorrow, August 26, 2020, to commemorate the Centennial of Women’s right to vote in the United States, buildings will light in purple and gold to remember the historic time when the 19th amendment to the United States Constitution was ratified.

The theme for this celebration comes from the original logo of the suffragettes “Forward Through the Darkness, Forward into Light.” I was asked to focus on industry in the Valley and the contributions made to them by our local women.

First of all, we have to remember that women could own a home, a hotel, a restaurant, a shop a factory, a school but they had no right to vote. Women were then, as they are now, the backbone of successful endeavors in the country.

In the Valley in the early years, women served as teachers, waitresses, cooks, secretaries. Then came the founding of the Robert Packer Hospital in 1885 and a new role became available to local women — nursing.

As the Packer grew so did the need for nurses, so in 1901, the Robert Packer Hospital School of Nursing was founded. Over the 100 year existence of the school, several thousand women received their training and many of them settled in the area having secured positions in the hospital after their graduation.

In 1910, the People’s Hospital (which later moved to Waverly and became Tioga General Hospital) was founded in Sayre, and it too had a training school for nurses. As time went on, the nursing homes and personal cares homes came to be and again, they employ mostly women.

Silk Mills moved into the area. There was one in Waverly and one in Athens, both of which employed predominately women and offered good jobs that taught the ladies a skill.

The Ingersoll Rand became a prominent employer in the Valley and employed women enough so that the girls that worked there had a service club called the “Randettes” that provided comradery to the working women.

Coats and Clark opened in Sayre early in the last century and after building a factory, the company became Belle Knitting then the Blue Swan Mill — all three concerns employed predominately women.

Then came Paxar. When I came to Sayre, Paxar was referred to as the label factory by the locals and had a dominantly female staff. Paxar, now Avery Dennison, is famous for labels made for denim products.

Our schools have grown over the years and so have the teaching staffs that are mostly women, the same goes for all of our fine restaurants in the Valley, the small and large shops, grocery stores, libraries, beauty shops, banks, and pharmacies to name a few.

During World War I and World War II, male labor became scarce and during both wars our local women had to step up and take on the roles that had been filled by men for the duration of the wars. The ladies of the Valley through the Sayre Red Cross fed and soothed thousands and thousands of our military who traveled through Sayre on the Lehigh Valley Railroad at the canteen set up there by the local women. Their efforts became nationally known and many of the traveling service men sent notes back to thank the Canteen Ladies for what was done for them.

Unfortunately for our women, there were lots of positions available to them but some did not pay fairly, and they had to fight for their rights for salaries and benefits just as they did for the right to vote. Where would we be today if the local ladies did not step up and fill the many positions that came about with the growth of the Valley?

On November 2, 1920, Mrs. Ellen Angier Blood, 205 Hayden Street in Sayre, went to the first ward poling place and cast her first vote at the age of 87 years. She was undoubtedly the oldest of the new voters to cast a ballot in Sayre one hundred years ago. Mrs. Blood died one year later on December 22, 1921. 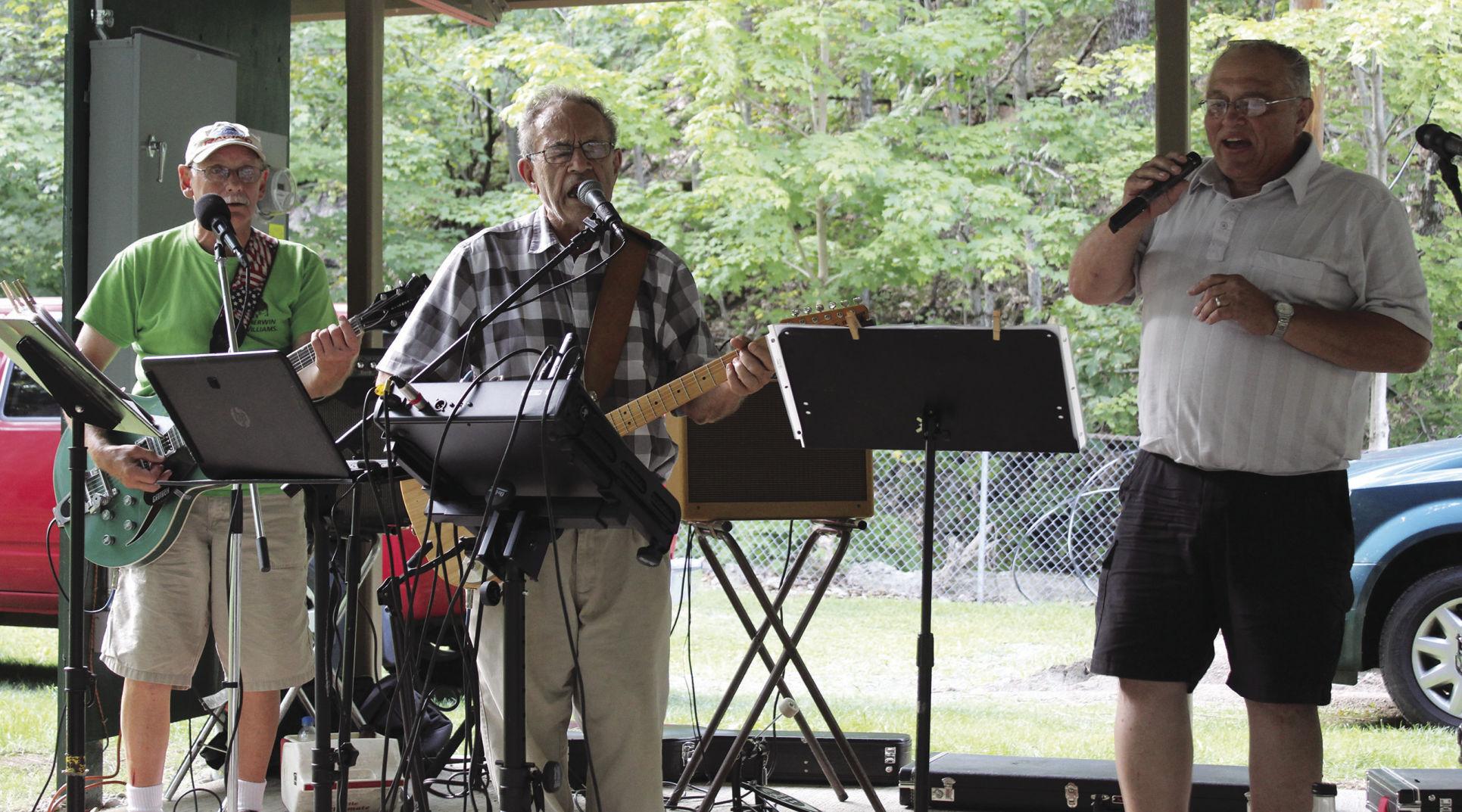 Double Take (pictured) and other local artists performed for a special edition of the Waverly Summer Concert Series at Waverly Glen on Monday Evening. The series will wrap up at Muldoon Park next Monday with a performance from Diana and the Crew.

The number of confirmed positive COVID-19 cases in Bradford County increased to 89 on Monday.

There are also eight cases in Athens and five in Ulster.

Three Bradford County residents have died due to complications of COVID-19.

Over 125,000 people in Pennsylvania have tested positive for COVID-19 and over 7,500 have died due to complications of the virus.

After adding four cases over the weekend, the number of positive COVID-19 cases in Tioga County increased again to 219 on Monday, according to a press release from Legislative Chair Martha Sauerbrey.

Fifteen of the cases are active.

The death toll related to the coronavirus in Tioga County is 25, with 22 of the deaths having ties to Elderwood skilled nursing facility in Waverly.

The number of recoveries in the county increased to 179.

Additionally, 102 people are in mandatory quarantine.

Chemung County added one new case of COVID-19 on Monday, as the total number rose to 164.

Three COVID-related deaths have been recorded in Chemung County, along with 152 recoveries.