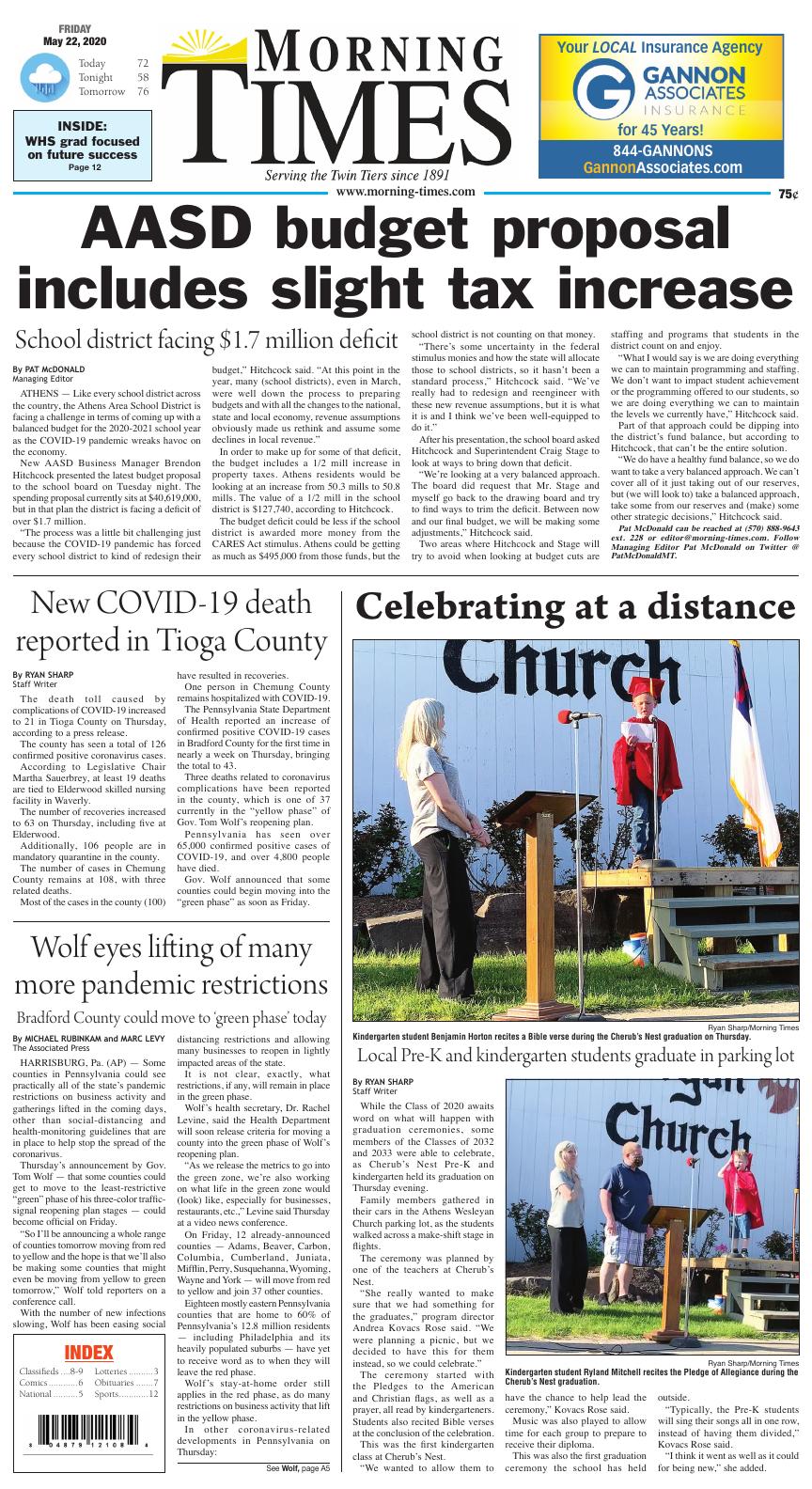 ATHENS — Like every school district across the country, the Athens Area School District is facing a challenge in terms of coming up with a balanced budget for the 2020-2021 school year as the COVID-19 pandemic wreaks havoc on the economy.

New AASD Business Manager Brendon Hitchcock presented the latest budget proposal to the school board on Tuesday night. The spending proposal currently sits at $40,619,000, but in that plan the district is facing a deficit of over $1.7 million.

“The process was a little bit challenging just because the COVID-19 pandemic has forced every school district to kind of redesign their budget,” Hitchcock said. “At this point in the year, many (school districts), even in March, were well down the process to preparing budgets and with all the changes to the national, state and local economy, revenue assumptions obviously made us rethink and assume some declines in local revenue.”

In order to make up for some of that deficit, the budget includes a 1/2 mill increase in property taxes. Athens residents would be looking at an increase from 50.3 mills to 50.8 mills. The value of a 1/2 mill in the school district is $127,740, according to Hitchcock.

“There’s some uncertainty in the federal stimulus monies and how the state will allocate those to school districts, so it hasn’t been a standard process,” Hitchcock said. “We’ve really had to redesign and reengineer with these new revenue assumptions, but it is what it is and I think we’ve been well-equipped to do it.”

After his presentation, the school board asked Hitchcock and Superintendent Craig Stage to look at ways to bring down that deficit.

“We’re looking at a very balanced approach. The board did request that Mr. Stage and myself go back to the drawing board and try to find ways to trim the deficit. Between now and our final budget, we will be making some adjustments,” Hitchcock said.

Two areas where Hitchcock and Stage will try to avoid when looking at budget cuts are staffing and programs that students in the district count on and enjoy.

Part of that approach could be dipping into the district’s fund balance, but according to Hitchcock, that can’t be the entire solution.

“We do have a healthy fund balance, so we do want to take a very balanced approach. We can’t cover all of it just taking out of our reserves, but (we will look to) take a balanced approach, take some from our reserves and (make) some other strategic decisions,” Hitchcock said.

While the Class of 2020 awaits word on what will happen with graduation ceremonies, some members of the Classes of 2032 and 2033 were able to celebrate, as Cherub’s Nest Pre-K and kindergarten held its graduation on Thursday evening.

Family members gathered in their cars in the Athens Wesleyan Church parking lot, as the students walked across a make-shift stage in flights.

The ceremony was planned by one of the teachers at Cherub’s Nest.

“She really wanted to make sure that we had something for the graduates,” program director Andrea Kovacs Rose said. “We were planning a picnic, but we decided to have this for them instead, so we could celebrate.”

The ceremony started with the Pledges to the American and Christian flags, as well as a prayer, all read by kindergarteners. Students also recited Bible verses at the conclusion of the celebration.

This was the first kindergarten class at Cherub’s Nest.

“We wanted to allow them to have the chance to help lead the ceremony,” Kovacs Rose said.

Music was also played to allow time for each group to prepare to receive their diploma.

This was also the first graduation ceremony the school has held outside.

“Typically, the Pre-K students will sing their songs all in one row, instead of having them divided,” Kovacs Rose said.

“I think it went as well as it could for being new,” she added.

The death toll caused by complications of COVID-19 increased to 21 in Tioga County on Thursday, according to a press release.

The county has seen a total of 126 confirmed positive coronavirus cases.

According to Legislative Chair Martha Sauerbrey, at least 19 deaths are tied to Elderwood skilled nursing facility in Waverly.

The number of recoveries increased to 63 on Thursday, including five at Elderwood.

Additionally, 106 people are in mandatory quarantine in the county.

The number of cases in Chemung County remains at 108, with three related deaths.

Most of the cases in the county (100) have resulted in recoveries.

One person in Chemung County remains hospitalized with COVID-19.

The Pennsylvania State Department of Health reported an increase of confirmed positive COVID-19 cases in Bradford County for the first time in nearly a week on Thursday, bringing the total to 43.

Three deaths related to coronavirus complications have been reported in the county, which is one of 37 currently in the “yellow phase” of Gov. Tom Wolf’s reopening plan.

Pennsylvania has seen over 65,000 confirmed positive cases of COVID-19, and over 4,800 people have died.

Gov. Wolf announced that some counties could begin moving into the “green phase” as soon as Friday.

Carolyn Lauer takes a break from tending a gravestone to talk with her sister Nancy Kissinger, Wednesday, May 20, 2020, at Calvary Cemetery in Millcreek Township, Erie County, Pennsylvania. The siblings were cleaning family grave markers in advance of Memorial Day. While doing the annual work, Lauer, 67, of Lawrence Park Township, Erie County, wore an American flag-themed face mask that she made herself. "It's the most comfortable mask I have," said Lauer. "And I like the flags." (Christopher Millette/Erie Times-News via AP)

HARRISBURG, Pa. (AP) — Some counties in Pennsylvania could see practically all of the state’s pandemic restrictions on business activity and gatherings lifted in the coming days, other than social-distancing and health-monitoring guidelines that are in place to help stop the spread of the coronarivus.

Thursday’s announcement by Gov. Tom Wolf — that some counties could get to move to the least-restrictive “green” phase of his three-color traffic-signal reopening plan stages — could become official on Friday.

“So I’ll be announcing a whole range of counties tomorrow moving from red to yellow and the hope is that we’ll also be making some counties that might even be moving from yellow to green tomorrow,” Wolf told reporters on a conference call.

With the number of new infections slowing, Wolf has been easing social distancing restrictions and allowing many businesses to reopen in lightly impacted areas of the state.

It is not clear, exactly, what restrictions, if any, will remain in place in the green phase.

“As we release the metrics to go into the green zone, we’re also working on what life in the green zone would (look) like, especially for businesses, restaurants, etc.,” Levine said Thursday at a video news conference.

Eighteen mostly eastern Pennsylvania counties that are home to 60% of Pennsylvania’s 12.8 million residents — including Philadelphia and its heavily populated suburbs — have yet to receive word as to when they will leave the red phase.

Wolf’s stay-at-home order still applies in the red phase, as do many restrictions on business activity that lift in the yellow phase.

In other coronavirus-related developments in Pennsylvania on Thursday:

Gov. Tom Wolf signed legislation Thursday that lawmakers passed overwhelmingly as a way to provide some outlet for bars and others to make money while they are shut down or limited during the state’s pandemic restrictions on in-house dining and drinking.

There are limits on the drinks.

The drinks must be sold as mixed drinks in quantities no larger than 64 ounces in a sealed container, and not after 11 p.m.

To sell the drinks, hotel and restaurant licensees that offer meals to-go must have lost at least 25% of their average monthly sales due to coronavirus restrictions.

Licencees can continue selling the drinks after the state’s disaster order if they are operating at less than 60% of their normal business.

Wolf said he didn’t necessarily think the legislation was a good idea, but noted its overwhelming support in the Legislature as a lifeline to bars and restaurants.

Meanwhile, bars and restaurants in counties that have been minimally impacted by the coronavirus are asking to be allowed to seat customers again, at least outside.

Those bars and restaurants should be able to open decks, patios and courtyards, at up to 50% of the outdoor maximum seating capacity and with tables at least 6 feet apart, the Pennsylvania Licensed Beverage and Tavern Association said.

Parking lots also could be used to offer limited seating, roped off with a single entry point, while the bars and restaurants could offer live entertainment, with restrictions on noise levels, the group said.

As the virus continues to ebb, the association said it wants establishments to be able to seat patrons inside, with the same social-distancing rules as outside.

Pennsylvania’s Department of State approved Philadelphia’s plan to consolidate some 850 polling places into 190 polling places for the June 2 primary election that will be conducted while the city is likely to still be under the governor’s coronavirus stay-at-home order.

The Pennsylvania Department of Health on Thursday reported 102 additional deaths linked to COVID-19, raising the statewide total to 4,869.

Two-thirds of the state’s deaths have been among residents of nursing homes and other facilities that care for older adults.

State health officials also reported that 980 more people have tested positive for the new coronavirus. The state has recorded fewer than 1,000 new cases for 11 consecutive days.

Since early March, infections have been confirmed in more than 65,000 people in Pennsylvania.

The number of infections is thought to be far higher than the state’s confirmed case count because many people have not been tested, and studies suggest people can be infected without feeling sick. There is no data on how many people have fully recovered.

For most people, the virus causes mild or moderate symptoms that clear up in a couple of weeks. Older adults and people with existing health problems are at higher risk of more severe illness, including pneumonia, or death.