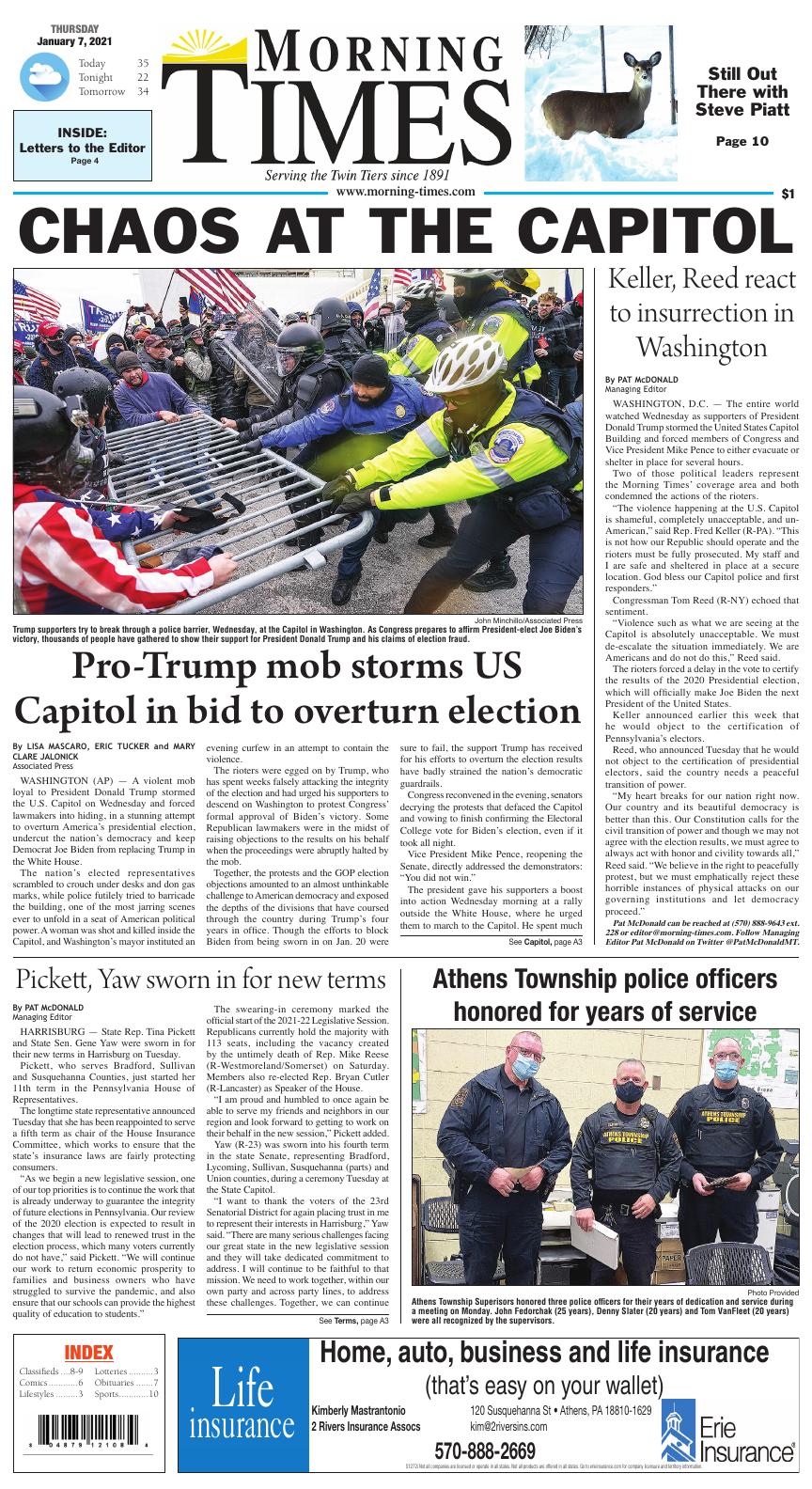 People shelter in the House gallery as protesters try to break into the House Chamber at the U.S. Capitol on Wednesday, Jan. 6, 2021, in Washington. (AP Photo/Andrew Harnik)

Police hold off Trump supporters who tried to break through a police barrier, Wednesday, Jan. 6, 2021, at the Capitol in Washington. As Congress prepares to affirm President-elect Joe Biden's victory, thousands of people have gathered to show their support for President Donald Trump and his claims of election fraud. (AP Photo/Julio Cortez)

Members of the National Guard arrive to secure the area outside the U.S. Capitol, Wednesday, Jan. 6, 2021, in Washington. (AP Photo/Jacquelyn Martin)

President Donald Trump speaks during a rally protesting the electoral college certification of Joe Biden as President, Wednesday in Washington.

Trump supporters try to break through a police barrier, Wednesday, Jan. 6, 2021, at the Capitol in Washington. As Congress prepares to affirm President-elect Joe Biden's victory, thousands of people have gathered to show their support for President Donald Trump and his claims of election fraud. (AP Photo/Julio Cortez)

Trump supporters try to break through a police barrier, Wednesday, at the Capitol in Washington. As Congress prepares to affirm President-elect Joe Biden’s victory, thousands of people have gathered to show their support for President Donald Trump and his claims of election fraud.

Police keep a watch on demonstrators who tried to break through a police barrier, Wednesday, Jan. 6, 2021, at the Capitol in Washington. (AP Photo/Julio Cortez)

Smoke fills the walkway outside the Senate Chamber as supporters of President Donald Trump are confronted by U.S. Capitol Police officers inside the Capitol, Wednesday, Jan. 6, 2021 in Washington. (AP Photo/Manuel Balce Ceneta)

WASHINGTON (AP) — A violent mob loyal to President Donald Trump stormed the U.S. Capitol on Wednesday and forced lawmakers into hiding, in a stunning attempt to overturn America’s presidential election, undercut the nation’s democracy and keep Democrat Joe Biden from replacing Trump in the White House.

The nation’s elected representatives scrambled to crouch under desks and don gas marks, while police futilely tried to barricade the building, one of the most jarring scenes ever to unfold in a seat of American political power. A woman was shot and killed inside the Capitol, and Washington’s mayor instituted an evening curfew in an attempt to contain the violence.

The rioters were egged on by Trump, who has spent weeks falsely attacking the integrity of the election and had urged his supporters to descend on Washington to protest Congress’ formal approval of Biden’s victory. Some Republican lawmakers were in the midst of raising objections to the results on his behalf when the proceedings were abruptly halted by the mob.

Together, the protests and the GOP election objections amounted to an almost unthinkable challenge to American democracy and exposed the depths of the divisions that have coursed through the country during Trump’s four years in office. Though the efforts to block Biden from being sworn in on Jan. 20 were sure to fail, the support Trump has received for his efforts to overturn the election results have badly strained the nation’s democratic guardrails.

Congress reconvened in the evening, senators decrying the protests that defaced the Capitol and vowing to finish confirming the Electoral College vote for Biden’s election, even if it took all night.

Vice President Mike Pence, reopening the Senate, directly addressed the demonstrators: “You did not win.”

The president gave his supporters a boost into action Wednesday morning at a rally outside the White House, where he urged them to march to the Capitol. He spent much of the afternoon in his private dining room off the Oval Office watching scenes of the violence on television. At the urging of his staff, he reluctantly issued a pair of tweets and a taped video telling his supporters it was time to “go home in peace” — yet he still said he backed their cause.

A somber President-elect Biden, two weeks away from being inaugurated, said American democracy was “under unprecedented assault, ” a sentiment echoed by many in Congress, including some Republicans. Former President George W. Bush said he watched the events in “disbelief and dismay.”

The domed Capitol building has for centuries been the scene of protests and occasional violence. But Wednesday’s events were particularly astounding both because they unfolded at least initially with the implicit blessing of the president and because of the underlying goal of overturning the results of a free and fair presidential election.

Tensions were already running high when lawmakers gathered early Wednesday afternoon for the constitutionally mandated counting of the Electoral College results, in which Biden defeated Trump, 306-232. Despite pleas from Republican Senate Majority Leader Mitch McConnell, more than 150 GOP lawmakers planned to support objections to some of the results, though lacking evidence of fraud or wrongdoing in the election.

Trump spent the lead-up to the proceedings publicly hectoring Pence, who had a largely ceremonial role in the proceedings, to aid the effort. He tweeted on Wednesday: “Do it Mike, this is a time for extreme courage!”

But Pence, in a statement shortly before presiding, defied Trump, saying he could not claim “unilateral authority” to reject the electoral votes that make Biden president.

In the aftermath, several Republicans announced they would drop their objections to the election, including Sen. Kelly Loeffler, R-Ga., who lost her bid for reelection Tuesday. She called the siege of the Capitol “abhorrent.”

Shortly after the first GOP objections, protesters fought past police and breached the building, shouting and waving Trump and American flags as they marched through the halls. Lawmakers were told to duck under their seats for cover and put on gas masks after tear gas was used in the Capitol Rotunda. Some House lawmakers tweeted they were sheltering in place in their offices.

Rep. Scott Peters, D-Calif., told reporters he was in the House chamber when rioters began storming it. Security officers “made us all get down, you could see that they were fending off some sort of assault.” He said they had a piece of furniture up against the door, the entry to the House floor from the Rotunda. “And they had guns pulled,” Peters said.

“And they just told us to take our pins off,” he added, referring to lapel pins members wear so Capitol Police can quickly identify them. Then the lawmakers were evacuated.

Staff members grabbed the boxes of Electoral College votes as the evacuation took place. Otherwise, said Sen. Jeff Merkley, D-Ore., the ballots likely would have been destroyed by the protesters.

Trump supporters posting on internet forums popular with far-right fringe elements celebrated the chaos. Messages posted on one turned from profane frustration over the content of Trump’s speech to glee when supporters stormed the building. At least one leading figure was livestreaming video from inside the Capitol during the siege.

The mob’s storming of Congress prompted outrage, mostly from Democrats but from Republicans as well, as lawmakers accused Trump of fomenting the violence with his relentless falsehoods about election fraud. Several suggested that Trump be prosecuted for a crime, which seemed unlikely two weeks from when his term expires.

“I think Donald Trump probably should be brought up on treason for something like this,” Rep. Jimmy Gomez, D-Calif., told reporters. “This is how a coup is started. And this is how democracy dies.”

Sen. Ben Sasse, R-Neb., who’s at times clashed with Trump, issued a statement saying, “Lies have consequences. This violence was the inevitable and ugly outcome of the President’s addiction to constantly stoking division.”

Despite Trump’s repeated claims of voter fraud, election officials and his own former attorney general have said there were no problems on a scale that would change the outcome. All the states have certified their results as fair and accurate, by Republican and Democratic officials alike.

HARRISBURG — State Rep. Tina Pickett and State Sen. Gene Yaw were sworn in for their new terms in Harrisburg on Tuesday.

Pickett, who serves Bradford, Sullivan and Susquehanna Counties, just started her 11th term in the Pennsylvania House of Representatives.

The longtime state representative announced Tuesday that she has been reappointed to serve a fifth term as chair of the House Insurance Committee, which works to ensure that the state’s insurance laws are fairly protecting consumers.

“As we begin a new legislative session, one of our top priorities is to continue the work that is already underway to guarantee the integrity of future elections in Pennsylvania. Our review of the 2020 election is expected to result in changes that will lead to renewed trust in the election process, which many voters currently do not have,” said Pickett. “We will continue our work to return economic prosperity to families and business owners who have struggled to survive the pandemic, and also ensure that our schools can provide the highest quality of education to students.”

The swearing-in ceremony marked the official start of the 2021-22 Legislative Session. Republicans currently hold the majority with 113 seats, including the vacancy created by the untimely death of Rep. Mike Reese (R-Westmoreland/Somerset) on Saturday. Members also re-elected Rep. Bryan Cutler (R-Lancaster) as Speaker of the House.

“I am proud and humbled to once again be able to serve my friends and neighbors in our region and look forward to getting to work on their behalf in the new session,” Pickett added.

Yaw (R-23) was sworn into his fourth term in the state Senate, representing Bradford, Lycoming, Sullivan, Susquehanna (parts) and Union counties, during a ceremony Tuesday at the State Capitol.

“I want to thank the voters of the 23rd Senatorial District for again placing trust in me to represent their interests in Harrisburg,” Yaw said. “There are many serious challenges facing our great state in the new legislative session and they will take dedicated commitment to address. I will continue to be faithful to that mission. We need to work together, within our own party and across party lines, to address these challenges. Together, we can continue to make our state a better place to live, work and raise our families.” 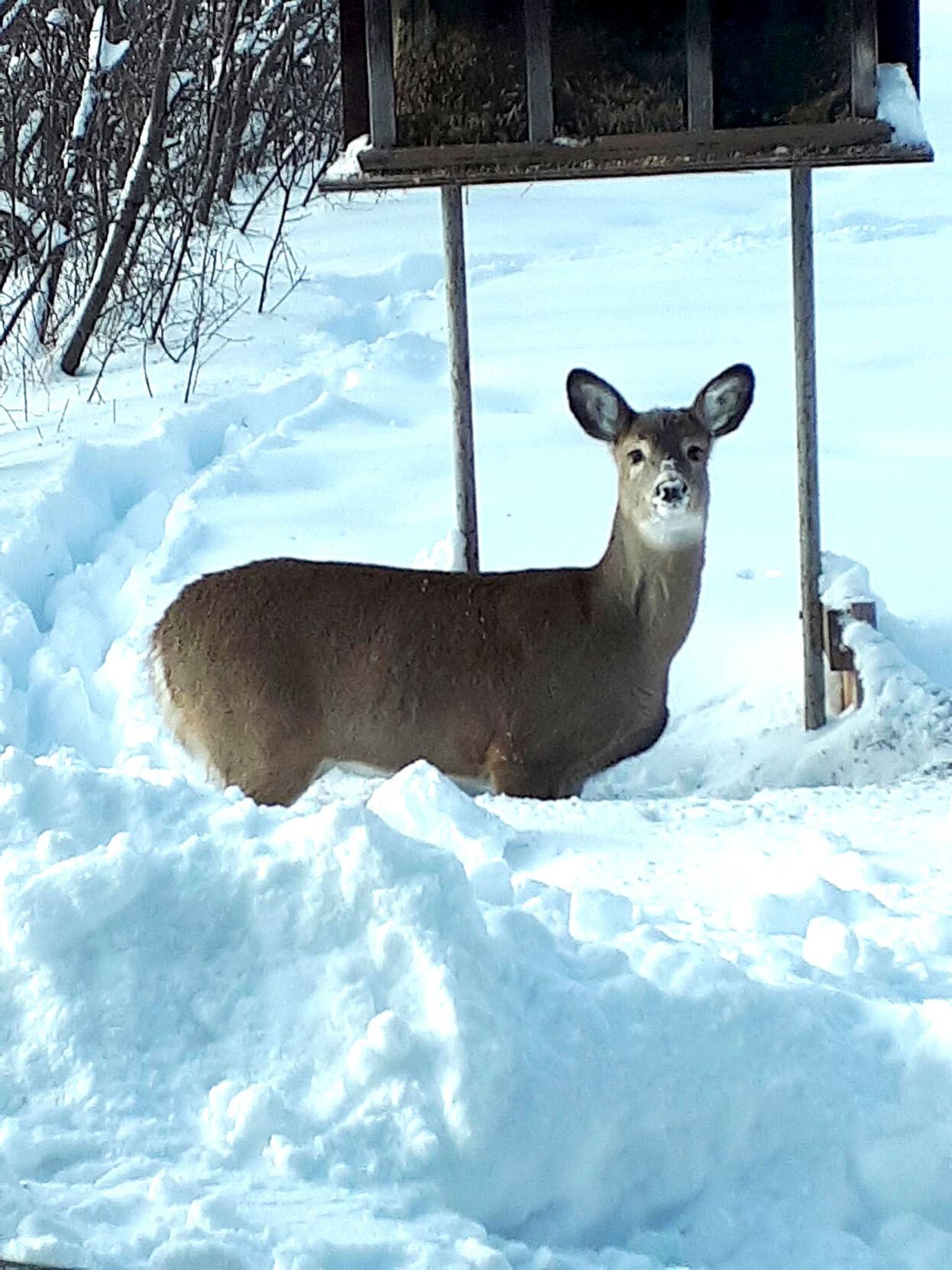 WASHINGTON, D.C. — The entire world watched Wednesday as supporters of President Donald Trump stormed the United States Capitol Building and forced members of Congress and Vice President Mike Pence to either evacuate or shelter in place for several hours.

Two of those political leaders represent the Morning Times’ coverage area and both condemned the actions of the rioters.

“The violence happening at the U.S. Capitol is shameful, completely unacceptable, and un-American,” said Rep. Fred Keller (R-PA). “This is not how our Republic should operate and the rioters must be fully prosecuted. My staff and I are safe and sheltered in place at a secure location. God bless our Capitol police and first responders.”

“Violence such as what we are seeing at the Capitol is absolutely unacceptable. We must de-escalate the situation immediately. We are Americans and do not do this,” Reed said.

The rioters forced a delay in the vote to certify the results of the 2020 Presidential election, which will officially make Joe Biden the next President of the United States.

Keller announced earlier this week that he would object to the certification of Pennsylvania’s electors.

Reed, who announced Tuesday that he would not object to the certification of presidential electors, said the country needs a peaceful transition of power.

“My heart breaks for our nation right now. Our country and its beautiful democracy is better than this. Our Constitution calls for the civil transition of power and though we may not agree with the election results, we must agree to always act with honor and civility towards all,” Reed said. “We believe in the right to peacefully protest, but we must emphatically reject these horrible instances of physical attacks on our governing institutions and let democracy proceed.” 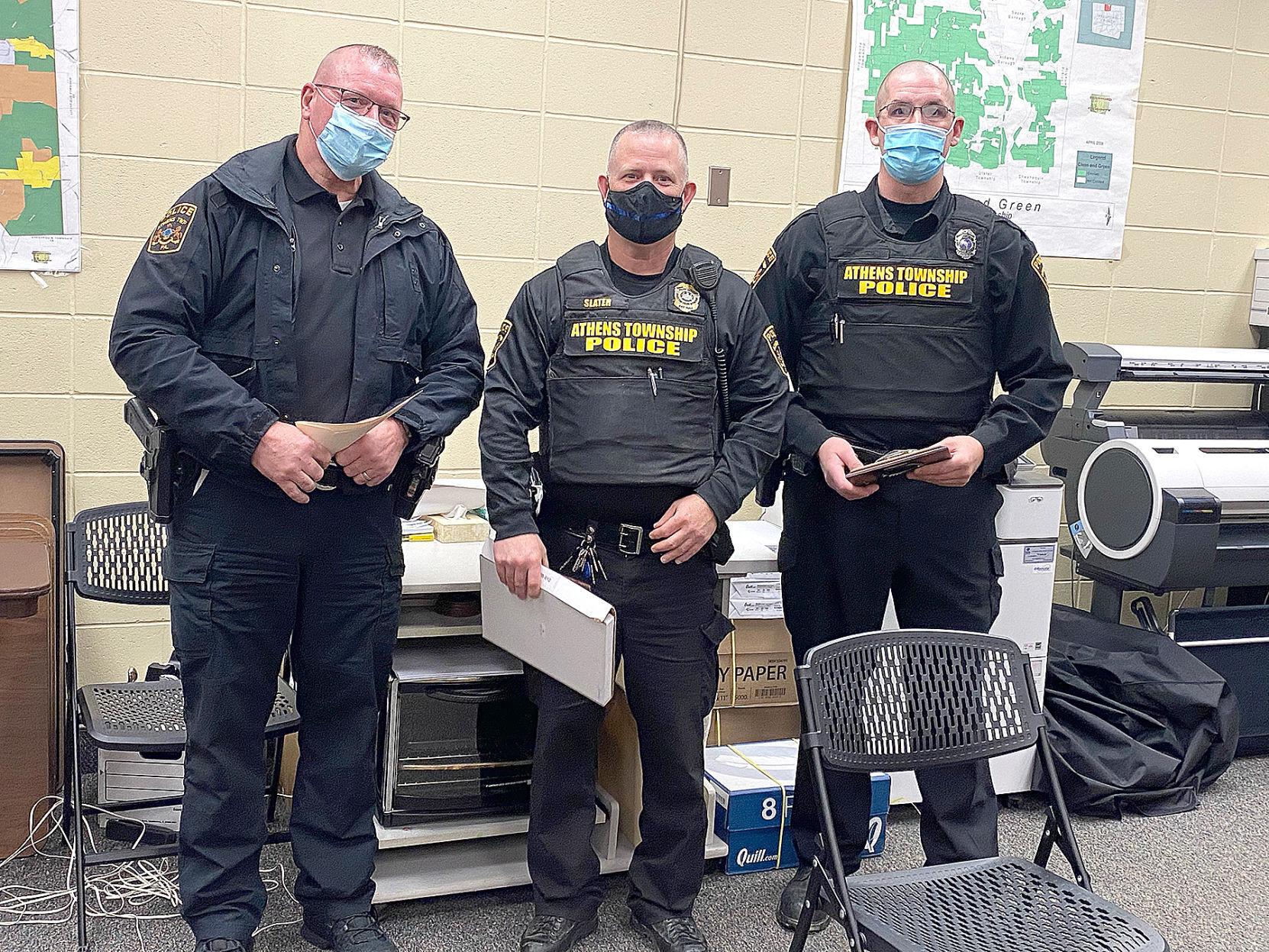 Athens Township Superisors honored three police officers for their years of dedication and service during a meeting on Monday. John Fedorchak (25 years), Denny Slater (20 years) and Tom VanFleet (20 years) were all recognized by the supervisors.