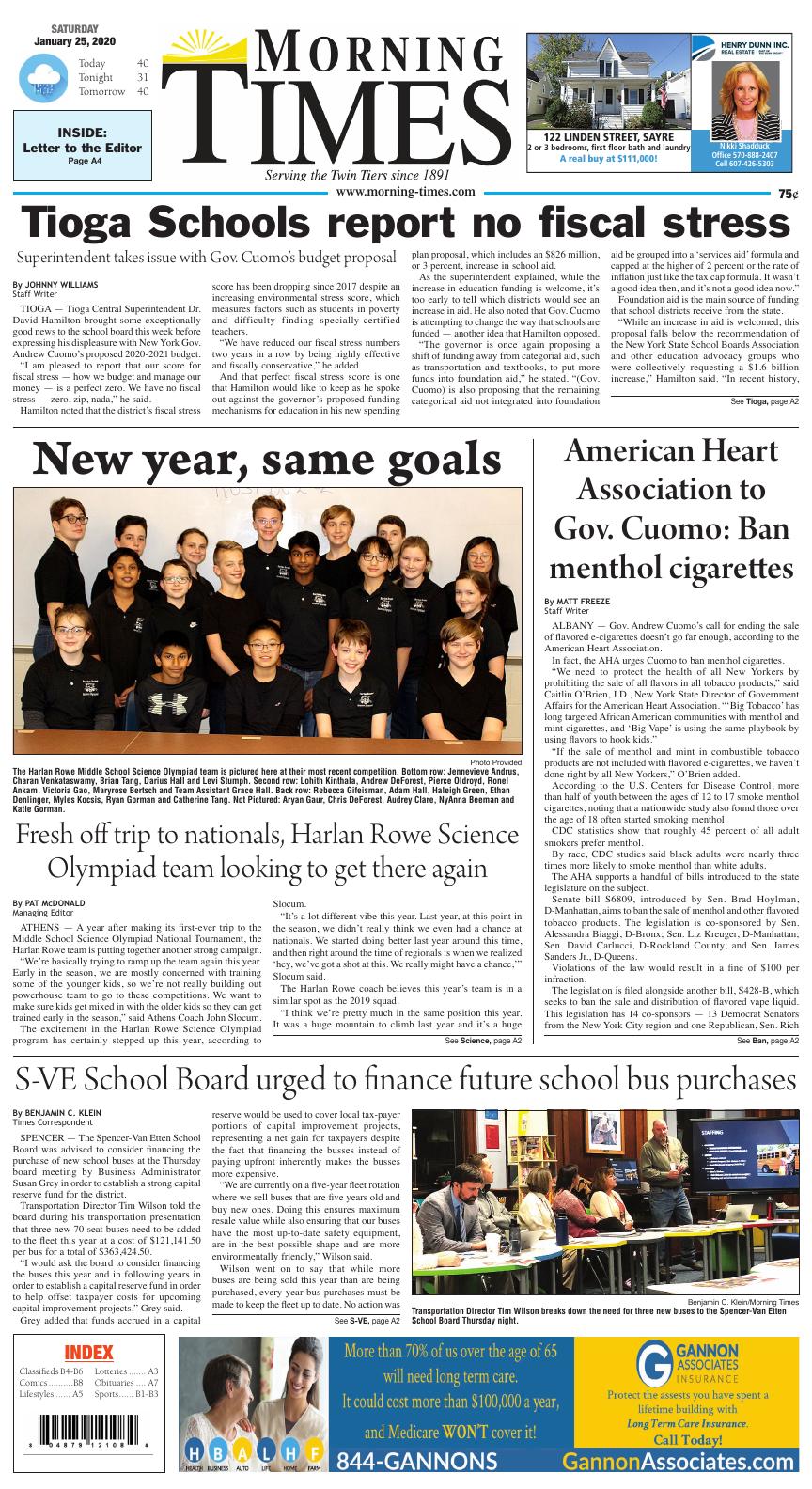 Hamilton noted that the district’s fiscal stress score has been dropping since 2017 despite an increasing environmental stress score, which measures factors such as students in poverty and difficulty finding specially-certified teachers.

“We have reduced our fiscal stress numbers two years in a row by being highly effective and fiscally conservative,” he added.

And that perfect fiscal stress score is one that Hamilton would like to keep as he spoke out against the governor’s proposed funding mechanisms for education in his new spending plan proposal, which includes an $826 million, or 3 percent, increase in school aid.

As the superintendent explained, while the increase in education funding is welcome, it’s too early to tell which districts would see an increase in aid. He also noted that Gov. Cuomo is attempting to change the way that schools are funded — another idea that Hamilton opposed.

“The governor is once again proposing a shift of funding away from categorial aid, such as transportation and textbooks, to put more funds into foundation aid,” he stated. “(Gov. Cuomo) is also proposing that the remaining categorical aid not integrated into foundation aid be grouped into a ‘services aid’ formula and capped at the higher of 2 percent or the rate of inflation just like the tax cap formula. It wasn’t a good idea then, and it’s not a good idea now.”

Foundation aid is the main source of funding that school districts receive from the state.

“While an increase in aid is welcomed, this proposal falls below the recommendation of the New York State School Boards Association and other education advocacy groups who were collectively requesting a $1.6 billion increase,” Hamilton said. “In recent history, the governor’s budget has typically been the lower of the initial proposals and the adopted budget has generally been a bit higher.”

Hamilton also noted that the spending plan does not describe what a “high needs school” is.

“This may or may not be beneficial to Tioga Central, because the foundation aid formula has many intricate mechanisms that drive money towards specific districts and regions,” he said. “I am also concerned about the impact of collapsing and putting an artificial cap on categorical aid. These have historically been paid to compensate for actual services provided to students which allows us to be flexible from year to year based on needs.

“Transportation in particular is critical to rural districts with large geographic areas to serve,” Hamilton continued. “Freezing these aid categories would limit our ability to respond to changing needs and force us to keep relatively high levels of service when we do not need them just to ensure we don’t lose future aid. We will have to wait to see the school aid runs to get a clearer picture of what this will mean for Tioga.”

Negotiations between Gov. Cuomo and the state legislature surrounding the budget are ongoing.

ATHENS — A year after making its first-ever trip to the Middle School Science Olympiad National Tournament, the Harlan Rowe team is putting together another strong campaign.

“We’re basically trying to ramp up the team again this year. Early in the season, we are mostly concerned with training some of the younger kids, so we’re not really building out powerhouse team to go to these competitions. We want to make sure kids get mixed in with the older kids so they can get trained early in the season,” said Athens Coach John Slocum.

The excitement in the Harlan Rowe Science Olympiad program has certainly stepped up this year, according to Slocum.

“It’s a lot different vibe this year. Last year, at this point in the season, we didn’t really think we even had a chance at nationals. We started doing better last year around this time, and then right around the time of regionals is when we realized ‘hey, we’ve got a shot at this. We really might have a chance,’” Slocum said.

The Harlan Rowe coach believes this year’s team is in a similar spot as the 2019 squad.

“I think we’re pretty much in the same position this year. It was a huge mountain to climb last year and it’s a huge mountain to climb this year,” Slocum said. “We’re not starting at the top this year … almost half the team is new students coming in, so we still have the same obstacles ahead of us, but I think our chances at this point this year are the same as our chances were last year at this point.”

Part of the challenge of repeating that success will be adding new members to the team this year, according to Slocum.

“Like I said almost half of them are new, so they don’t know what it’s like to go to nationals and we’re trying to make sure they understand the kind of dedication and hard work it takes to get there. They are picking it up, they are learning,” Slocum said.

It’s clear that this year’s group is ready for the challenge as they have already found some success at events.

Harlan Rowe sent two teams to an invitational in West Chester recently and came home with a 9th place and 17th place finish out of 60 teams. Slocum called the event “one of the most competitive contests on the East coast.”

The Athens squad picked up nine medals along the way — led by second-place finishes by Ronel Ankam and Brian Tang in Boomilever, and Katie Gorman and NyAnna Beeman for Write It Do It.

Darius Hall and Ethan Denlinger teamed up for a third-place medal in Mission Impossible and a fifth-place finish in Heredity.

While they have already been successful this year, Slocum knows his team will have to keep putting in the work to make a return trip to nationals.

“We’re doing everything we need to do and it’s going to take a lot of hard work, just like last year to get there,” Slocum said.

The Harlan Rowe team is heading to the Philadelphia area again this weekend to compete in another event.

Transportation Director Tim Wilson breaks down the need for three new buses to the Spencer-Van Etten School Board Thursday night.

SPENCER — The Spencer-Van Etten School Board was advised to consider financing the purchase of new school buses at the Thursday board meeting by Business Administrator Susan Grey in order to establish a strong capital reserve fund for the district.

Transportation Director Tim Wilson told the board during his transportation presentation that three new 70-seat buses need to be added to the fleet this year at a cost of $121,141.50 per bus for a total of $363,424.50.

“I would ask the board to consider financing the buses this year and in following years in order to establish a capital reserve fund in order to help offset taxpayer costs for upcoming capital improvement projects,” Grey said.

Grey added that funds accrued in a capital reserve would be used to cover local tax-payer portions of capital improvement projects, representing a net gain for taxpayers despite the fact that financing the busses instead of paying upfront inherently makes the busses more expensive.

“We are currently on a five-year fleet rotation where we sell buses that are five years old and buy new ones. Doing this ensures maximum resale value while also ensuring that our buses have the most up-to-date safety equipment, are in the best possible shape and are more environmentally friendly,” Wilson said.

Wilson went on to say that while more buses are being sold this year than are being purchased, every year bus purchases must be made to keep the fleet up to date. No action was taken by the board regarding financing the buses or establishing a capital reserve fund.

During the presentation, Wilson also detailed the work of the recently hired head bus driver, repairs that are needed to the bus garage and issues regarding tool use with the mechanics.

“Currently mechanics are bringing in their own tools to work on the buses, so I would like to establish a tool budget for the garage,” Wilson said.

Board President Don Johnson questioned the need for a tool budget, saying that for many mechanics it is the norm for them to bring in their own tools.

“And then there is the concern of tools (disappearing),” Johnson said.

Wilson responded that it is currently in the mechanics’ contract that tools will be provided for them. Board members also brought up concerns over safety and liability issues regarding mechanics bringing in their own tools. No vote was taken on a tool budget.

“As you know, and we discussed this before I even started, it always seems like something happens when I am not in that building,” Blaasch said, adding, “However the response times have been solid when called.”

Beyond providing an extra safety presence for the district, Blaasch, who is a retired Tioga County deputy sheriff still working part time with the department assigned to the SRO position, also detailed how he has established an open-door policy for students.

“Students have talked to me about careers in the military, police work, or sometimes they come in just to blow off some steam,” Blaasch said.

Following the presentations, the Board voted to allow a sportsman field trip into Pennsylvania despite the fact that the trip was previously canceled due to the prevalence of students returning with weapons such as knives and tasers.

Superintendent Diahann Hesler said that students would purchase these weapons in Pennsylvania, where they were legal, and return to school with them where they are not allowed.

With taser sales in Pennsylvania now illegal, the board voted unanimously to allow the field trip with the added condition that Blaasch is authorized to have students turn out their pockets and examine their bags before entering the bus to return to school.

In fact, the AHA urges Cuomo to ban menthol cigarettes.

“We need to protect the health of all New Yorkers by prohibiting the sale of all flavors in all tobacco products,” said Caitlin O’Brien, J.D., New York State Director of Government Affairs for the American Heart Association. “‘Big Tobacco’ has long targeted African American communities with menthol and mint cigarettes, and ‘Big Vape’ is using the same playbook by using flavors to hook kids.”

“If the sale of menthol and mint in combustible tobacco products are not included with flavored e-cigarettes, we haven’t done right by all New Yorkers,” O’Brien added.

According to the U.S. Centers for Disease Control, more than half of youth between the ages of 12 to 17 smoke menthol cigarettes, noting that a nationwide study also found those over the age of 18 often started smoking menthol.

The AHA supports a handful of bills introduced to the state legislature on the subject.

Violations of the law would result in a fine of $100 per infraction.

The legislation is filed alongside another bill, S428-B, which seeks to ban the sale and distribution of flavored vape liquid. This legislation has 14 co-sponsors — 13 Democrat Senators from the New York City region and one Republican, Sen. Rich Funke, of Rochester.

The AHA also called on the governor to keep budgets affecting public health on separate lines, and fully funded.

Praising the governor’s intent to lift people out of poverty, O’Brien said, “investing in prevention programs is an investment in children and saves money for families and on Medicaid spending in the future. It’s critical that funding for public health programs remain on separate budget lines and be increased.”

The American Heart Association is also advocating for a school wellness policy in New York.

“The governor talked about creating equity in educational opportunities in the budget address. If there is a statewide model school wellness policy and adequate funding, we can create health equity among schoolchildren, laying the basis for long and healthy lives for all of New York’s children,” O’Brien said.