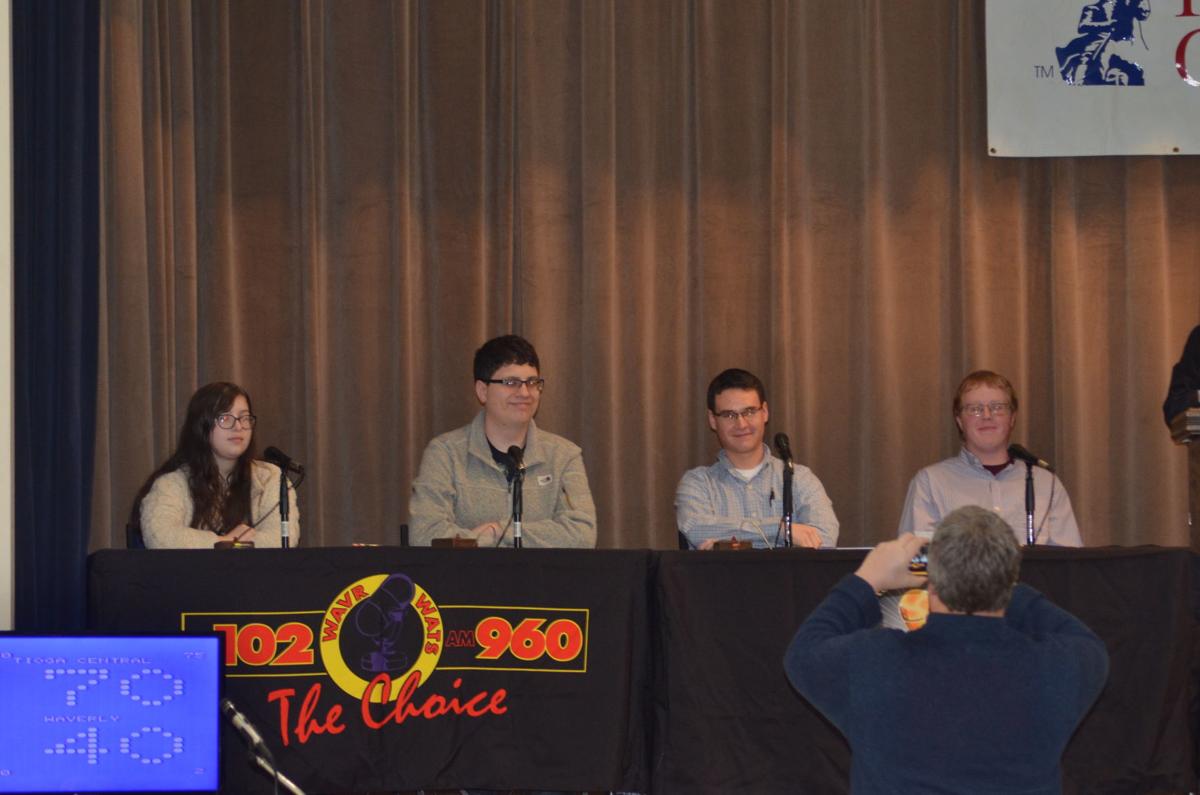 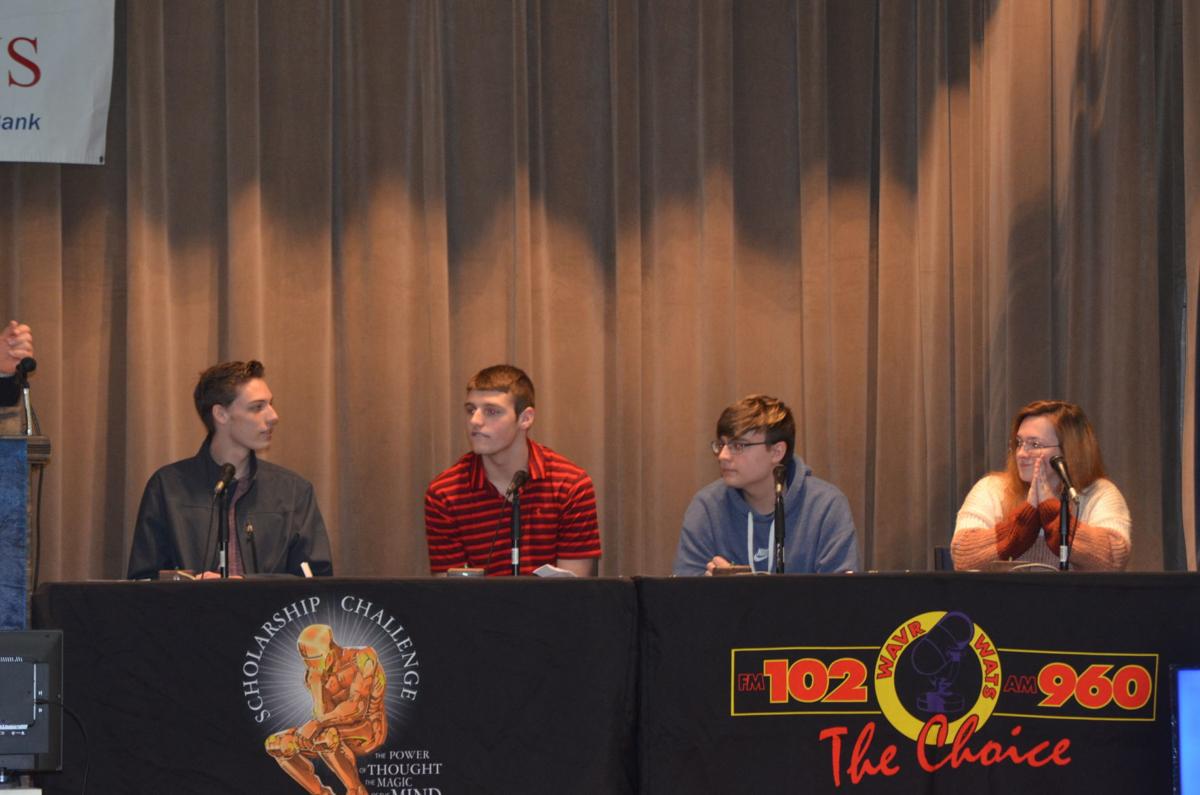 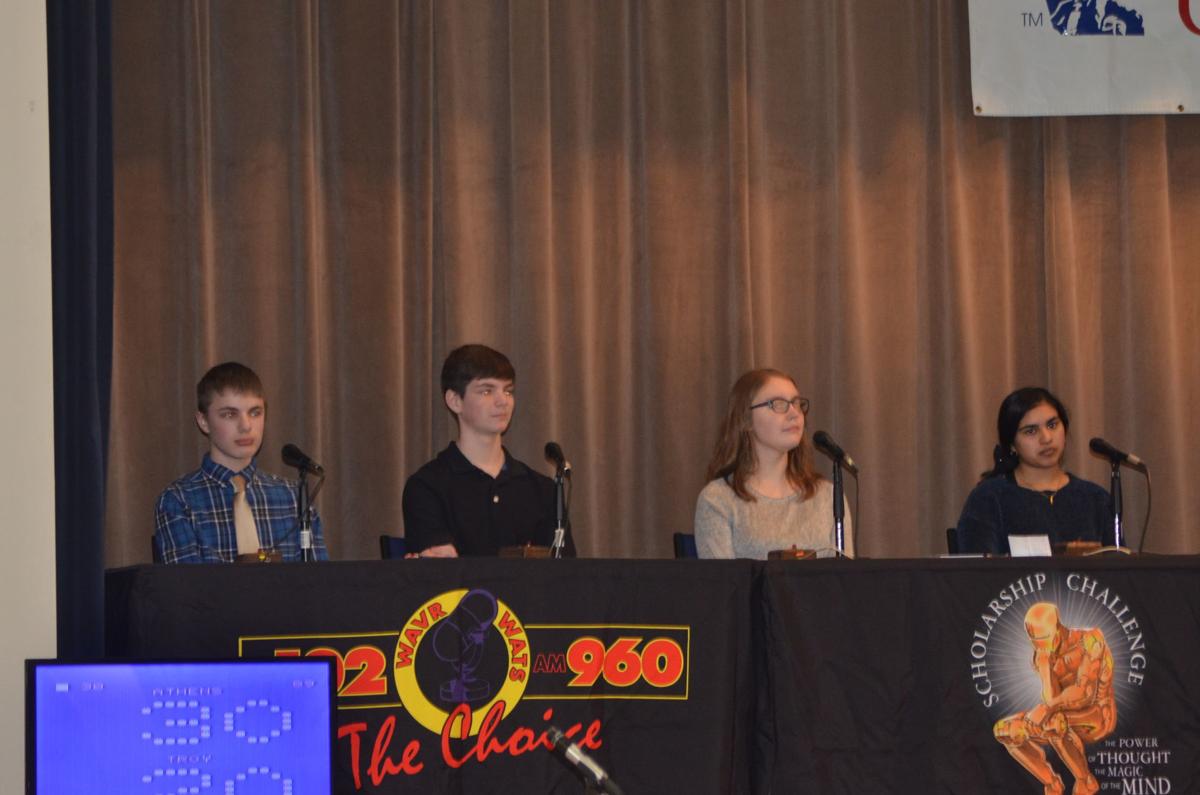 SAYRE — The first round of the 40th annual Scholarship Challenge featured some exciting moments inside the Patterson Auditorium on Saturday — and when the first day was complete, one of Athens High School’s two teams punched their ticket to the finals.

The challenge is organized and broadcast by Choice 102 Radio and hosted by owner and on-air personality Chuck Carver. The event pits 24 high school teams from New York and Pennsylvania against each other, in a test of knowledge to win prize money — and the coveted Kwasnoski Cup — for their school districts.

The opening match pinned the Tioga Central squad — consisting of captain Lukas Plaisted, Sean Walker, Alex Slater and Shannon Savocool and led by coach Karl Coddington — against the Wolverine team from Waverly, which was made up of captain Kameron Garrity, Scott Woodring, Jared Hugo, Luci Burnett and alternate Rachel Smith, and led by coaches Ron Chamberlain and Sandy Petrin.

Led by their captain, the Tigers jumped up to an early lead of 40-20 and continuously built upon it over the next two rounds, eventually winning 140-80.

Because Blue Ridge High School dropped out of the competition this week, the Athens Silver squad — which consisted of captain Amkitha Pamula, Lauren Walters, Ian Lynch, Luke Jones and alternate Justin Lynch, and coached by Lori Pruyne — immediately moved on and competed against the Troy Trojans, who proved to be a tough competitor out of the gate.

After holding just a one-answer lead over Troy for the first two rounds, the Wildcats finally opened up their advantage in the last round before coming out with a 120-70 victory.

The buzz-happy Tioga Central team found themselves in a hole to start off their match against Wellsboro, which stood at 30-10 after the first round.

However, the Tigers were unrelenting and eventually found their groove to defeat Wellsboro squad 110-60.

That led to the out-of-state matchup between hometown heavyweights Athens, who has the most scholarship challenge championships with five, against the small squad from Tioga Central, which has four of its own titles, but none since 1992.

But the Tigers once again fell to the negative score total early, holding -20 after the first two rounds while the Wildcats built up from 50 points to 90 in that time frame.

Tioga Central again attempted to mount a comeback, but the deficit was too much, and Athens clinched the first finals spot with a 100-40 win.

Round two of the Scholarship Challenge will take place at noon on Feb. 8 at the Patterson Auditorium in Sayre, and, as always, will be broadcast live by The Choice 102.1.