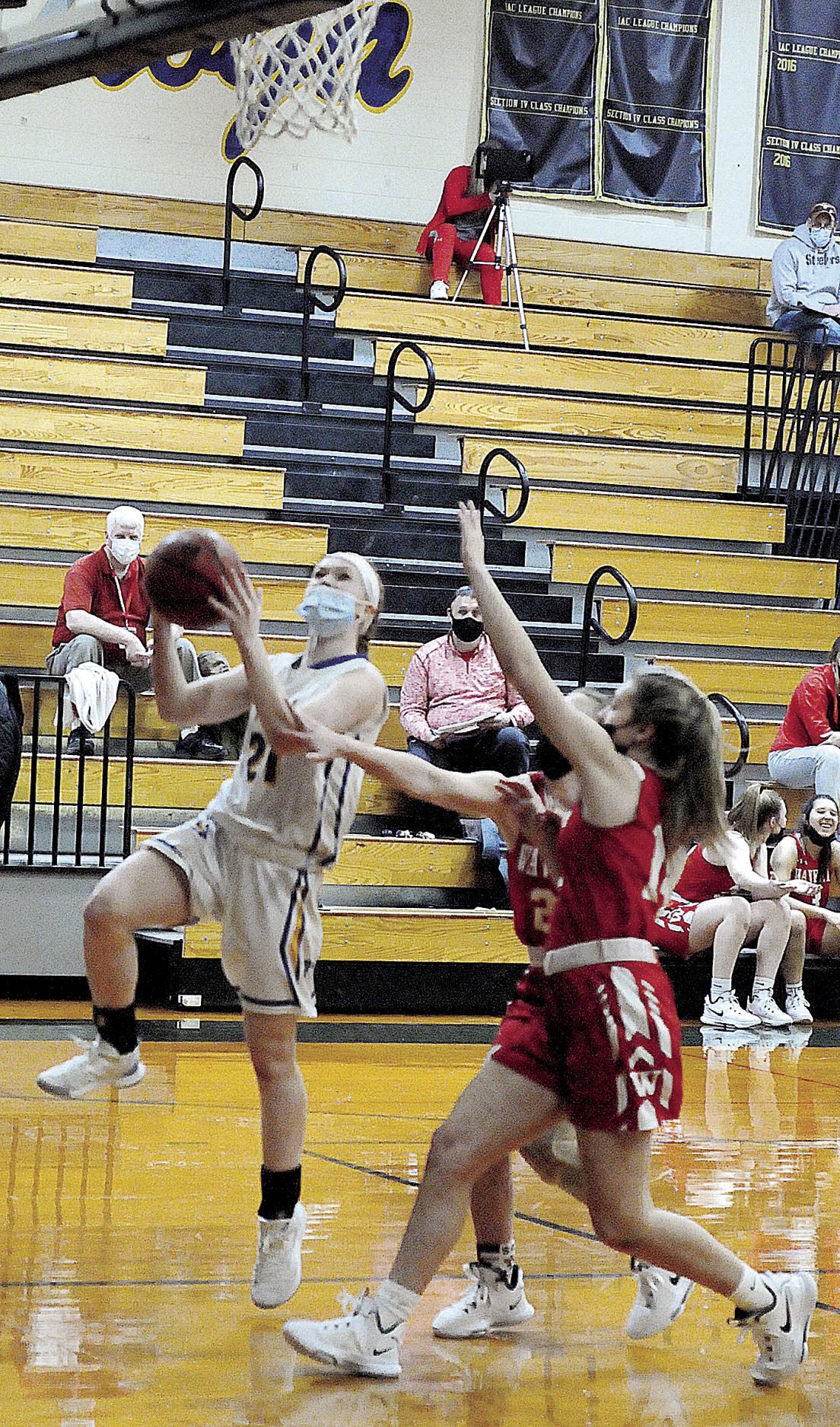 Tioga’s Liv Ayres gies in for a layup in her team’s game against Waverly on Saturday. 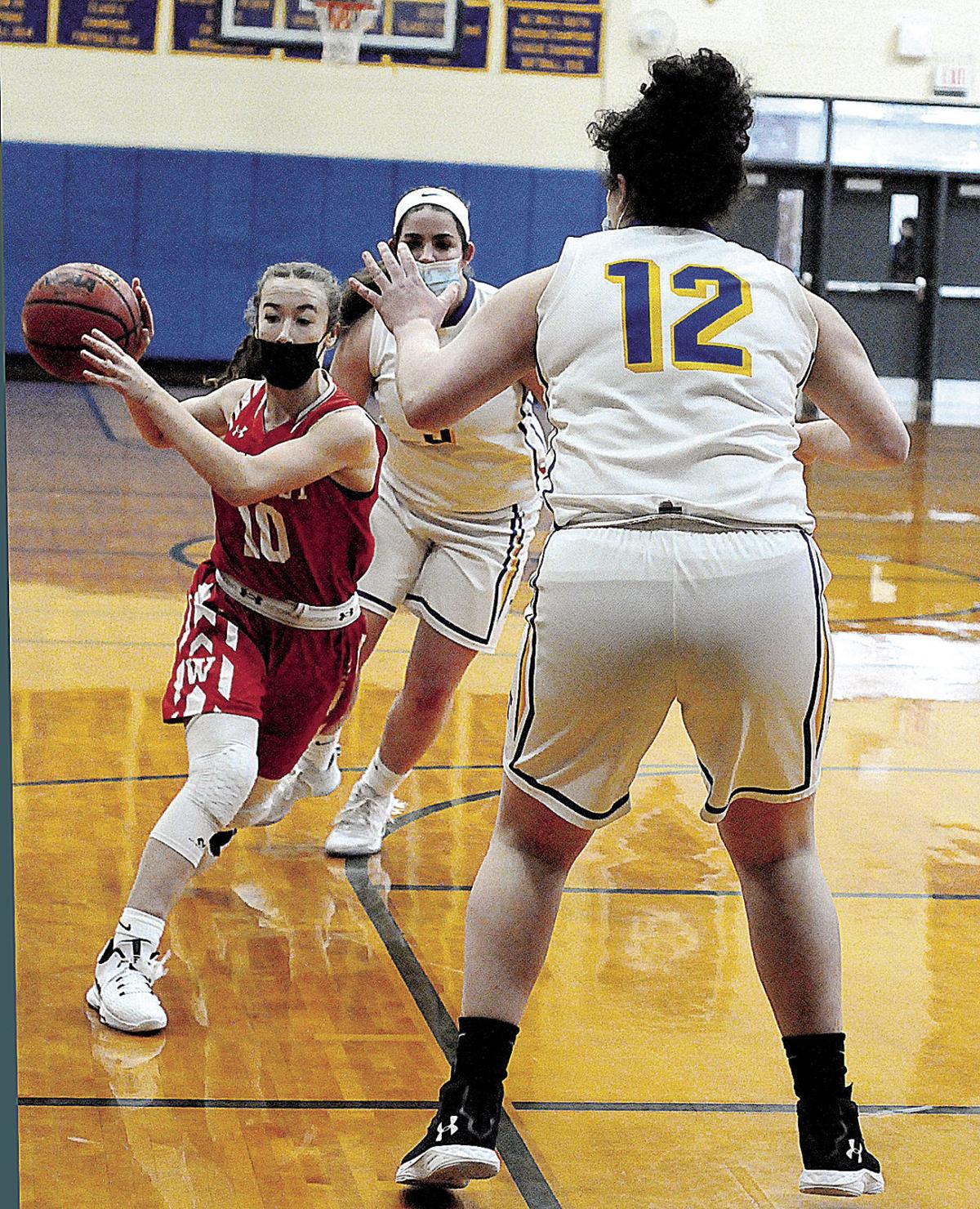 Waverly’s Kennedy Westbrook dishes off after driving the lane in her team’s game at Tioga Saturday.

Tioga’s Liv Ayres gies in for a layup in her team’s game against Waverly on Saturday.

Waverly’s Kennedy Westbrook dishes off after driving the lane in her team’s game at Tioga Saturday.

TIOGA — The Waverly girls basketball team continued its impressive start to the season defeating Tioga 79-41 in a Saturday afternoon matinee.

The Wolverines looked ready to attack from the opening tip. Waverly utilized a full-court press and Tioga could do nothing about it. Kennedy Westbrook, Gabby Picco, and Sidney Tomasso were all over the Tigers, forcing turnovers and scoring easy baskets.

“Waverly is an excellent team with a lot of speed. We haven’t faced that all year long, and we certainly were not prepared to handle their pressure,” Tioga Head Coach Joe Robinson said. “When they get a lot of pressure you get a lot of steals and quick baskets for them but we didn’t quit and we played hard.”

Waverly went on a 19-3 run to start the game and finished the quarter leading 24-6. Freshman Addison Westbrook had her break out game scoring 16 points including three from beyond the arc. Peyton Shaw stood out was well, contributing six points, stellar rebounding, and lock down defense.

“I think Payton Shaw had the best game yet with us. She is getting everything we talk about and her movement was good, hit the boards real well, and had an all-around good game” Waverly head coach Bob Kelly said. “The girls are getting more comfortable every game we go which is good. Addison shot the ball well today which is nice to see.”

The Tigers went down swinging scoring 16 points in the third quarter and never let up on the defensive side of the ball.

“I told them at half time I hope they continue to press so you guys can get used to it because right now you freak out whenever somebody gets near you but we will learn and look to play better on Tuesday,” Robinson said.

Kennedy Westbrook picked apart the Tigers pushing the pace creating shots at will for both herself and her teammates. Westbrook finished the game with 17 points. Tomasso was once again unstoppable, leading all scorers with 25 points including four three-pointers.

“Tioga always presents a challenge and especially here” Kelly said. “I know it’s a tough out and they beat us last time so we expected it and I think we responded pretty well today.”

Tioga will have a chance to rectify their mistakes and put what they learned into practice Tuesday Feb. 23 at 5:30 p.m. against Waverly on the road.

The Blue Jays were able to add to that lead in the third period and hold off the Wildcats from there.

The loss spoiled a monster game by Athens’ Caydence Macik, who had a double-double with 17 points and 10 boards, and still found the time to block five shots and register three steals.

Ellie Rowe had 13 points and Alex Hick added 12 for the Blue Jays.

Athens will host Wyalusing tonight in a 7:15 p.m. tip.