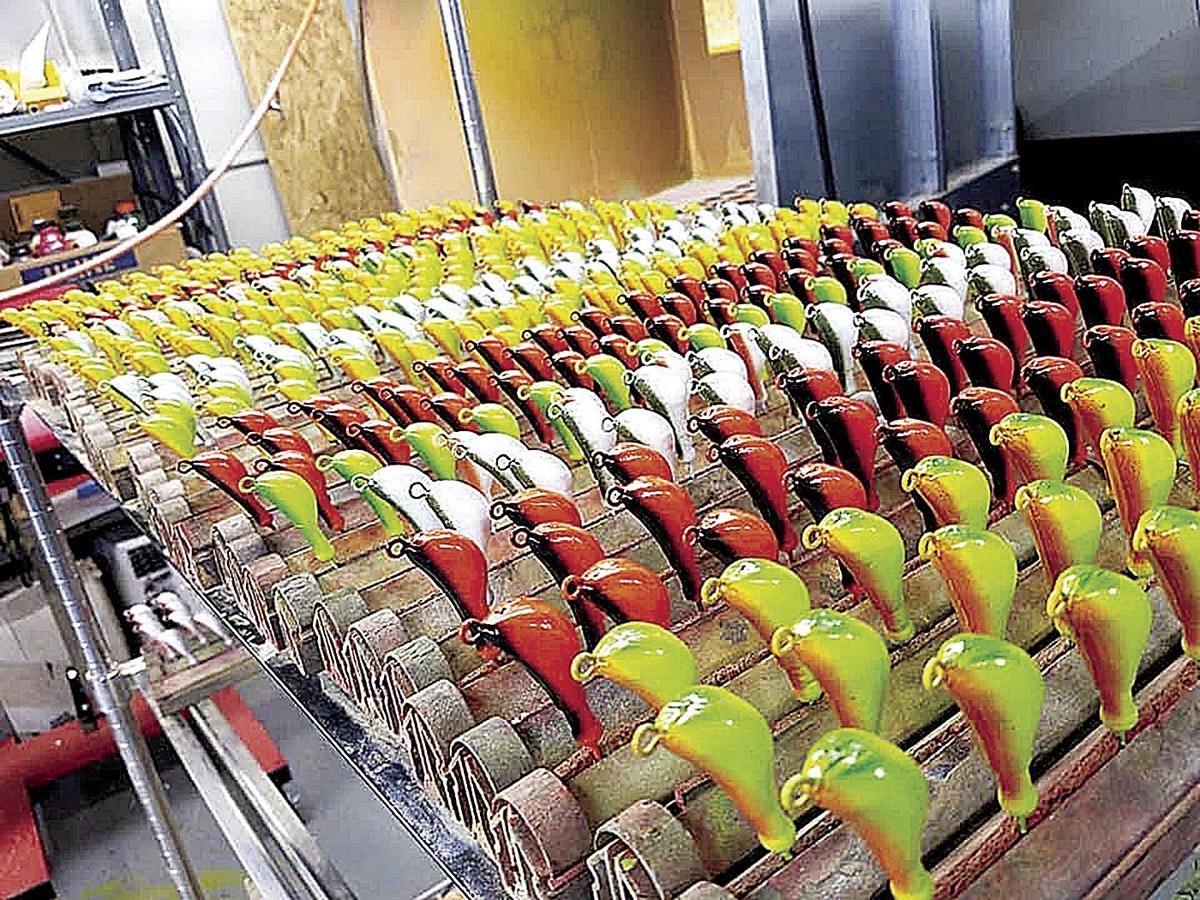 Lures come off the line at Heads and Tails Tackle in Sayre. 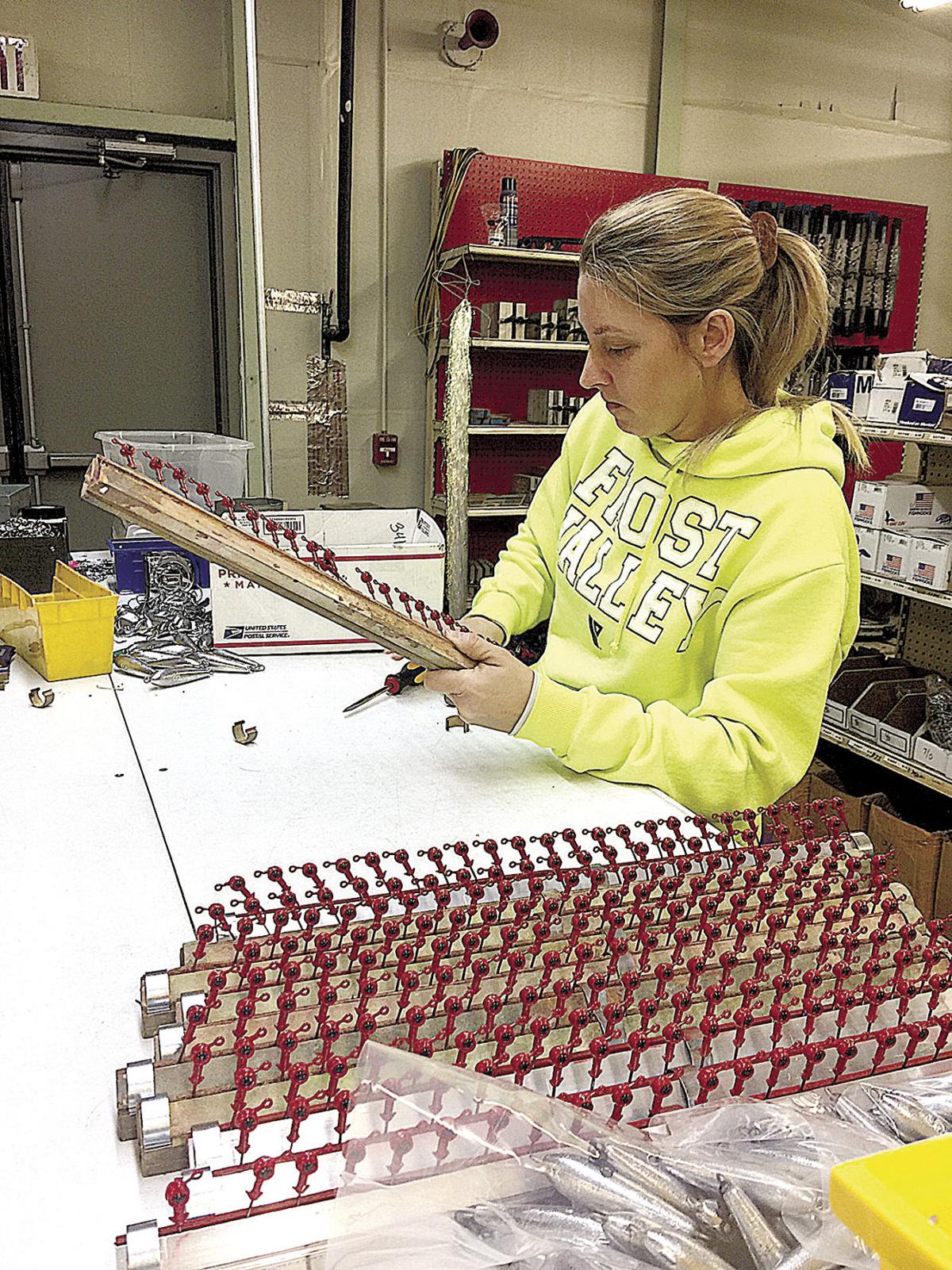 Lures come off the line at Heads and Tails Tackle in Sayre.

Sayre Borough’s Enterprise Center, that sprawling complex on South Elmer Avenue that once served as a garment-making factory and major employer of the Valley, is a long way from the Atlantic Ocean.

But surprisingly, some of the business activity within the building has a direct link to the world of saltwater fishing. And things are busy at Heads and Tails Tackle (htlure.com), so much so the business recently expanded into another 4,500 square feet of space in the center.

It’s a success story that’s a poster child of sorts for the Enterprise Center, which is designed to assist startup businesses by providing affordable space that sets the stage for further growth.

Heads and Tails Tackle secured about 2,000 square feet of space last August before earlier this month adding the additional space and doubling its workforce from six people to 12.

Owned by Horseheads native Clint Kellar, the business is actually a second-generation operation, having been launched years ago by Clint’s father George Kellar.

“About 38 years ago my father went to the old Lowman flea market,” Clint Kellar recalled. “He was a union carpenter but an ‘old salt’ who loves saltwater fishing. He found some old aluminum hand molds to make sinkers, some old plumber’s pipe and melted it down to make his own sinkers.”

While fishing aboard a party boat (out of) Gloucester, Mass., George Keller used his own sinkers, which caught the eye of the boat operator.

“The charter operator said, ‘the next time you come if you want bring 10,000 pounds of them and we’ll pay you,’” Clint Kellar said. “So he worked nights, weekends, bought all the lead he could find, loaded the sinkers into a pickup truck and U-Haul and returned home with a pocketful of money.”

Heads and Tails Tackle today bears little resemblance to the early days of his father’s sinker-making; it’s a high-tech operation complete with a 3D printer to develop concepts that can be turned into production molds.

“It’s all lead-based baits, and we produce our own molds in-house,” Clint Kellar said. “From the 3D printer, the idea gets turned into a production mold, and we don’t have to outsource all of these ideas, which keeps our overhead low.”

While the online business continues to grow through orders from individual anglers, the backbone of Heads and Tails Tackle is the wholesale market. A customer selling chatterbaits uses the local business for its cast heads, ordering 50,000-100,000 pieces at a time. Another wholesaler in North Carolina has a 50,000-piece contract every month, and just ordered another 40,000 pounds of sinkers, Kellar said.

“All of his manufacturing is done right here in Sayre now instead of the Dominican Republic,” said Kellar, who worked in middle management positions at Masco before launching the business in the enterprise center.

Kellar’s girlfriend, Holly Sinsabaugh, plays a key role in the operation as well. “She’s the boss,” Kellar says, only half jokingly. “Holly is really good, and I have the right people in the right places. The 3D printer, for example; I know I need somebody to run that piece of equipment. I can’t.”

Kellar’s 22-year-old son, Dylan, also works at the facility, setting the stage for a third generation of ownership.

While the focus remains on saltwater lures and tackle, Clint Kellar has also brought freshwater fishing into the mix, with musky lures and other bucktail jig offerings.

The recent expansion isn’t the end of the momentum at Heads and Tails Tackle; Kellar says he’s in talks with engineers on the purchase of a large, automated powder coating system, which would replace the manual, spray gun operation.

“The Enterprise Center has been a great place for us,” Keller said. “It has really allowed us to do a lot of the things we’ve been able to do. First and foremost, lease rates are at incubator levels, so they start out low; utilities are very reasonable, and there’s plenty of space. There’s a lot going on here – a lot of little businesses, as well as Guthrie.”

Steve Piatt can be reached via email at stevepiatt04@gmail.com.