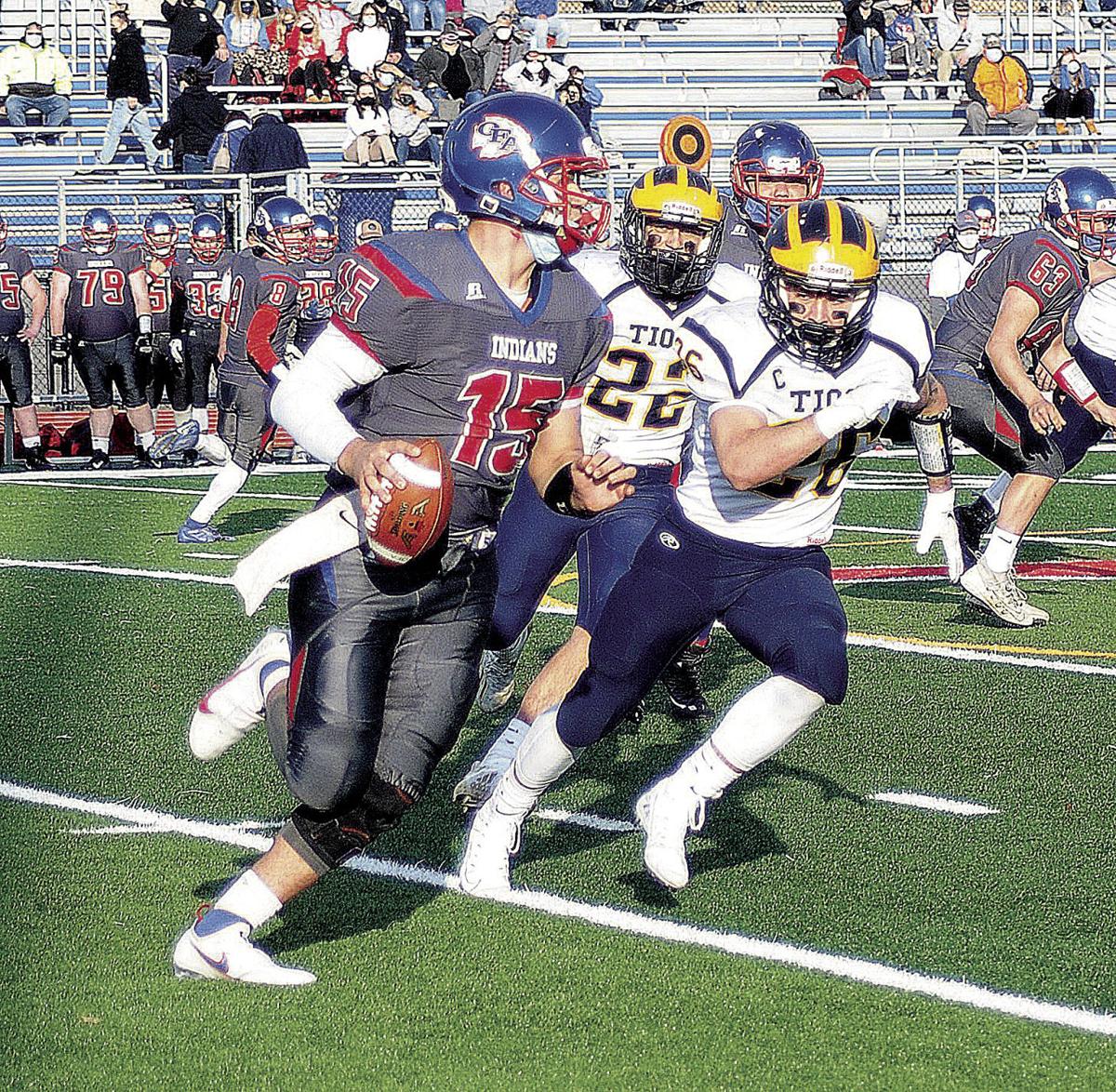 Owego quarterback is pursued by Tioga's Emmett Wood (26) and Isaac Peterson during their teams' game Saturday night at Owego. 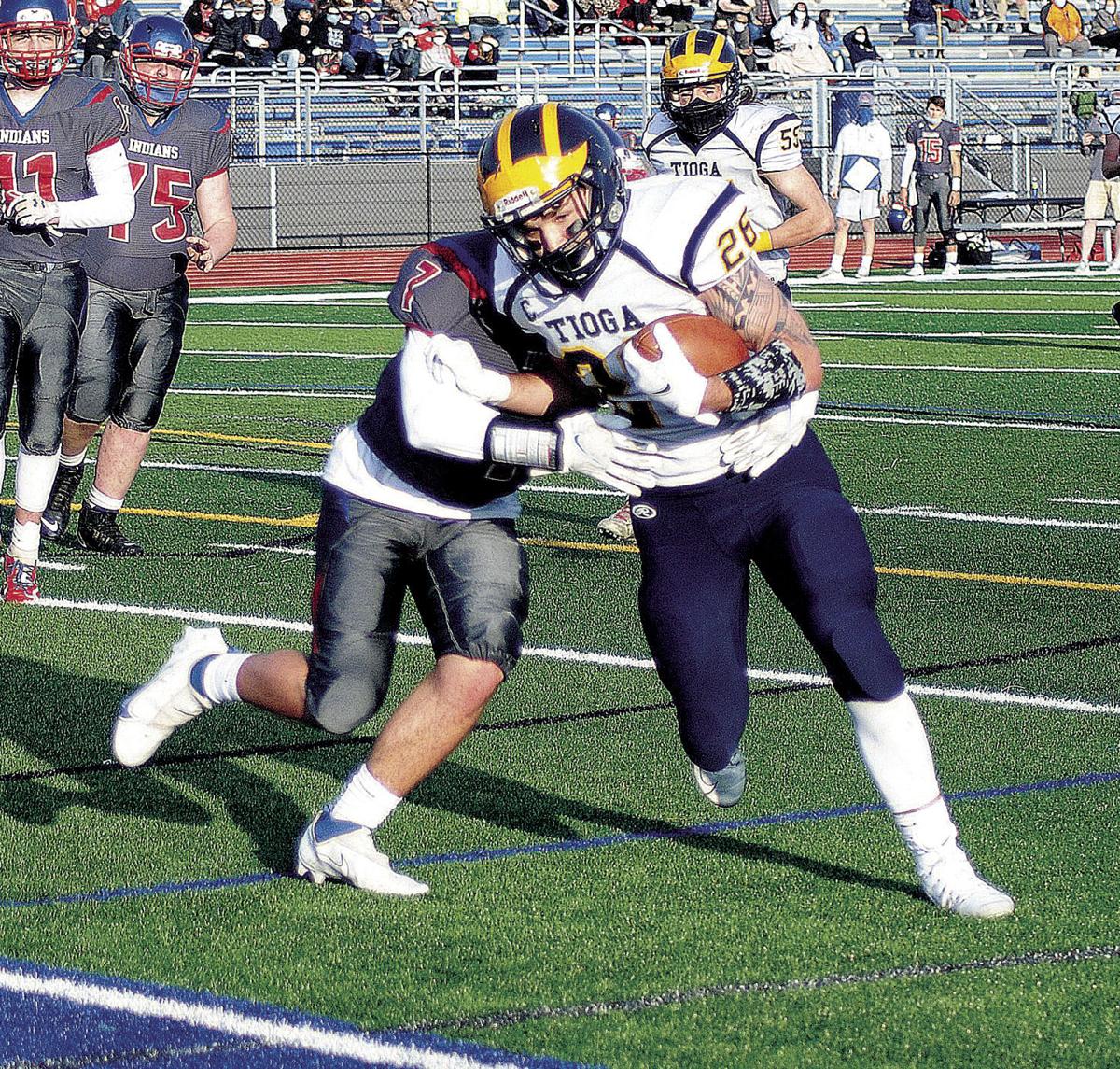 Tioga’s Emmett Wood sheds the last Owego defender on his way to the end zone in the first quarter of the teams’ game Saturday night. 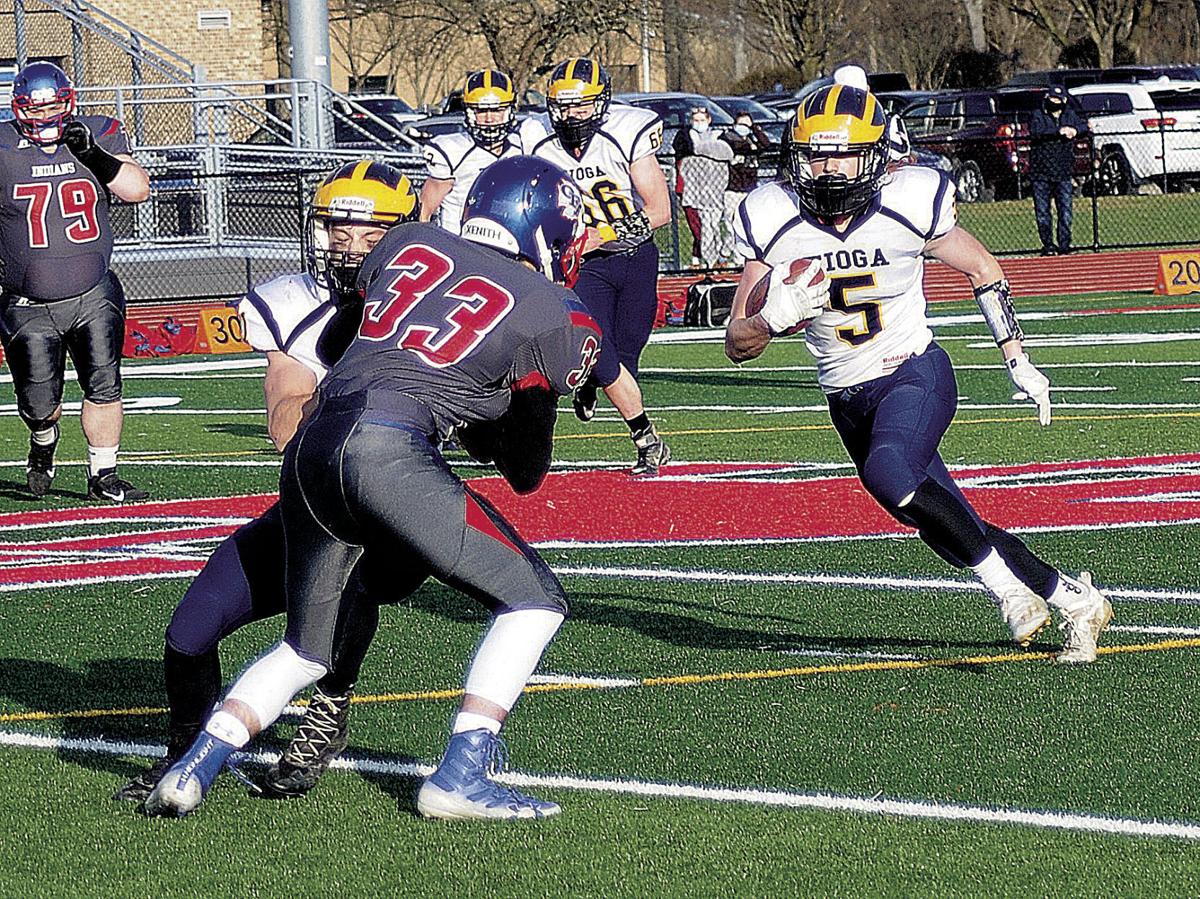 Tioga’s Ethan Perry (5) gets a block from Gavin Godfrey on a first-half run in the teams’ game Saturday night at Owego.

Owego quarterback is pursued by Tioga's Emmett Wood (26) and Isaac Peterson during their teams' game Saturday night at Owego.

Tioga’s Emmett Wood sheds the last Owego defender on his way to the end zone in the first quarter of the teams’ game Saturday night.

Tioga’s Ethan Perry (5) gets a block from Gavin Godfrey on a first-half run in the teams’ game Saturday night at Owego.

OWEGO — The Tioga-Owego football matchup figured to be a tough battle.

It was that, but the numbers tell a different story.

Tioga won 21-12 but the game, while in doubt until Gavin Godfrey punched it in from a yard out with 4:50 to play, was never really that close.

Owego had two big plays. a pick-six in the first half and a 56-yard Nick Wasyln bomb to a wide open Zach Miner in the fourth quarter.

The remainder of the game was dominated by the Tigers, who finished with 358 yards and allowed Owego, playing without starting tailback Cameron Bundy due to injury, to 96 total yards.

Aiello was concerned about Owego’s size and experience coming into the game.

“They’re huge. I think I heard they have 22 seniors and they’re just huge up front,” said the Tioga coach. “We knew it would be a challenge and we also knew we had to keep it outside. There wasn’t much up the middle so we tried to go inside-outsde and find some plays that were working in the second half.”

Owego took the ball at the start and only a pass interference penalty gave the Indians six total plays.

Tioga started on their 18-yard line and rolled down the field. The Tigers only faced one third down play and converted with ease. The second half of the drive saw double-digit gains by Emmett Wood, Ethan Perry on a pass from Ethan Agan, and a 16-yard hookup between Agan and Seth Franks.

Wood covered the last 16 yards. After a successful PAT, the Tigers had a lead they wouldn’t relinquish with 5:21 left in the first quarter.

Tioga was driving in the second quarter when Jayden Ripic stepped in front of an Agan pass and went 45 yards to paydirt. The PAT pass was unsuccessful, leaving Tioga with the lead.

Tioga’s next drive ended in a fumbled snap and the half wound up 7-6.

After each team went three-and-out to start the third, the Tigers took over at their 29-yard line. An 11-play march ensued with the only big plays being a 13-yard run by Wood and a 26-yard run up the middle by Godfrey.

The drive ate over five minutes of clock time and featured short-to-medium gains. Godfrey finished it off with a one-yard plunge to make it a 14-6 game.

Early in the fourth quarter, Wasyln found Miner behind the Tioga defense to close the gap to 14-12. The PAT pass was dropped to preserve Tioga’s lead.

Tioga took the ball 69 yards on the next possession, using nine plays and taking 3:28 off the clock. Owego had Tioga stopped, but on a fourth-and-5 Tioga induced the Indians to jump. That didn’t give Tioga the first down it thought it had so Aiello went for it on fourth-and-1 from Tioga’s 40.

Agan got the first down on a plunge and the march continued. The big play was a 53-yard burst over the left side by Wood. Miner nudged him out of bounds at the 1-yard line, and Godfrey finished it off up the middle.

“We talked through some stuff at halftime but it came down to working through some adversity,” said Aiello. “Penalties and a fumble when we were driving set us back and we lost momentum. Going for it on fourth down and getting it really put the momentum and Emmett’s big run on that last drive setting up the score was big.”

Owego managed one first down on its final possession but never threatened.

For Owego, Wasyln had 99 yards passing, hitting six of 19 with the TD and pick. The Indians lost three yards on 16 carries. Miner had three catches for 73 yards and a scoree.

Tioga is scheduled to host Groton Saturday night at Owego. That game may be moved to Friday night at Tioga if the Tigers’ home field is good to go, so stay tuned.