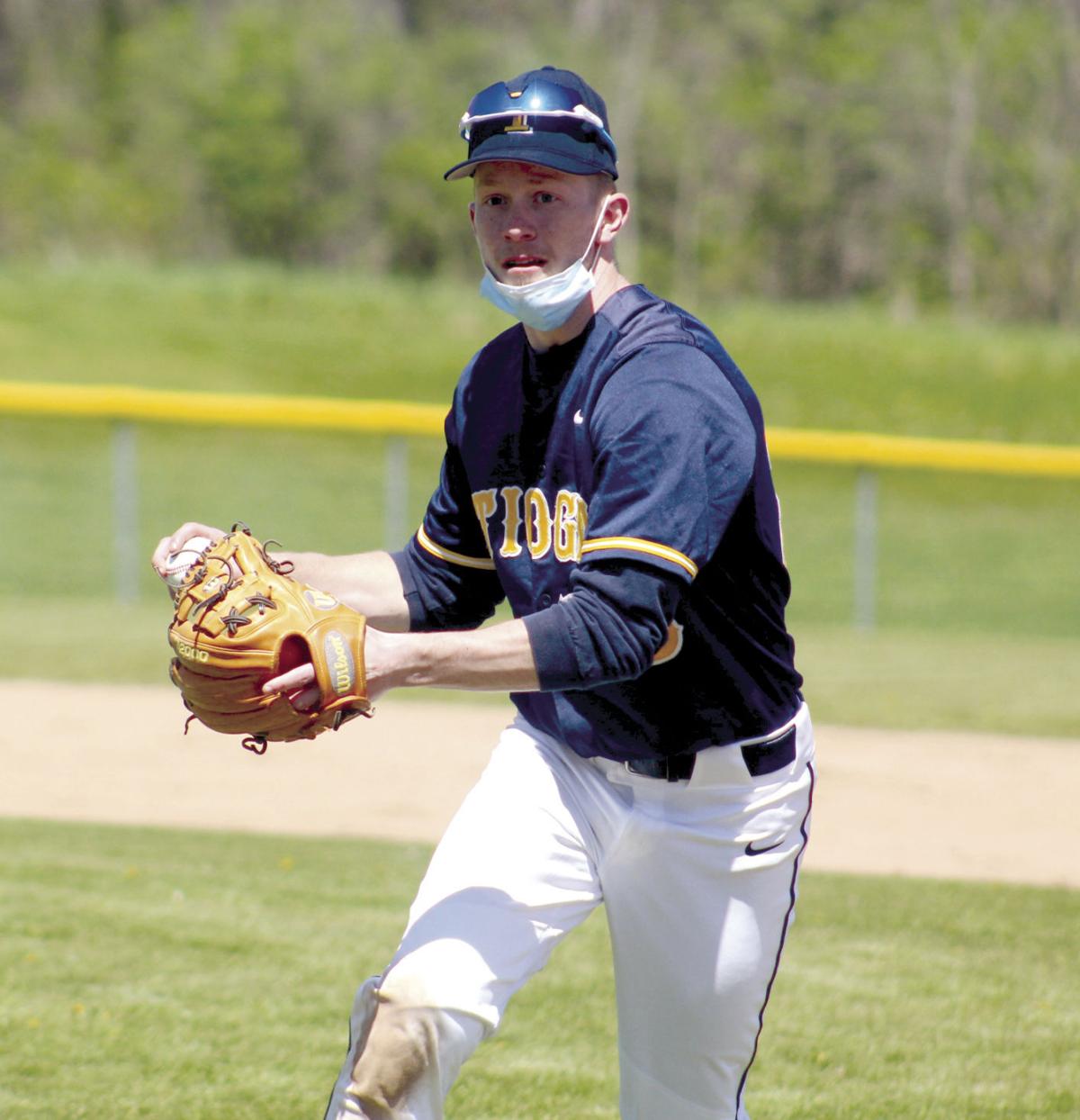 Tioga’s Cobe Whitmore readies to throw to first in Tioga’s game against Athens on Saturday. 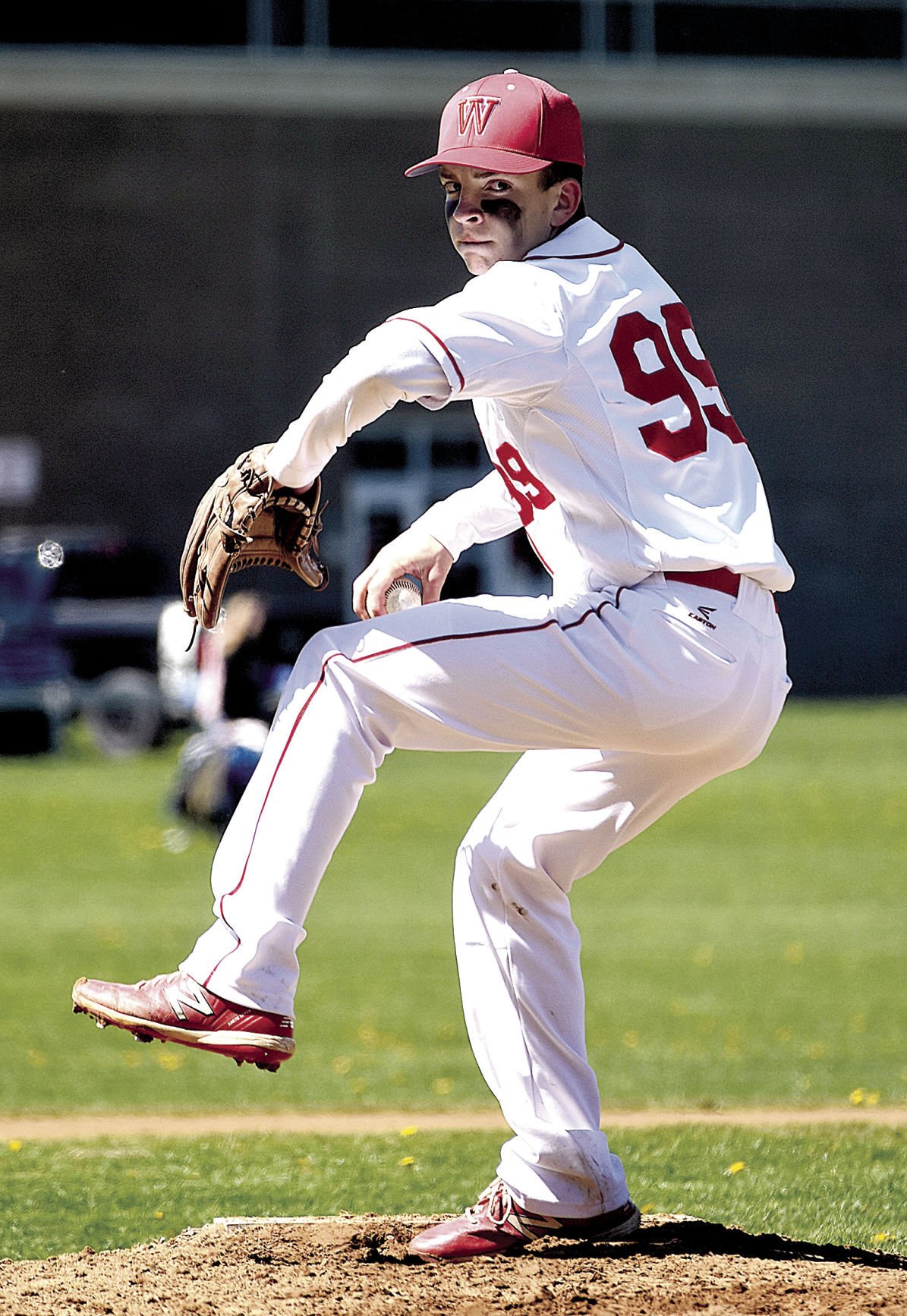 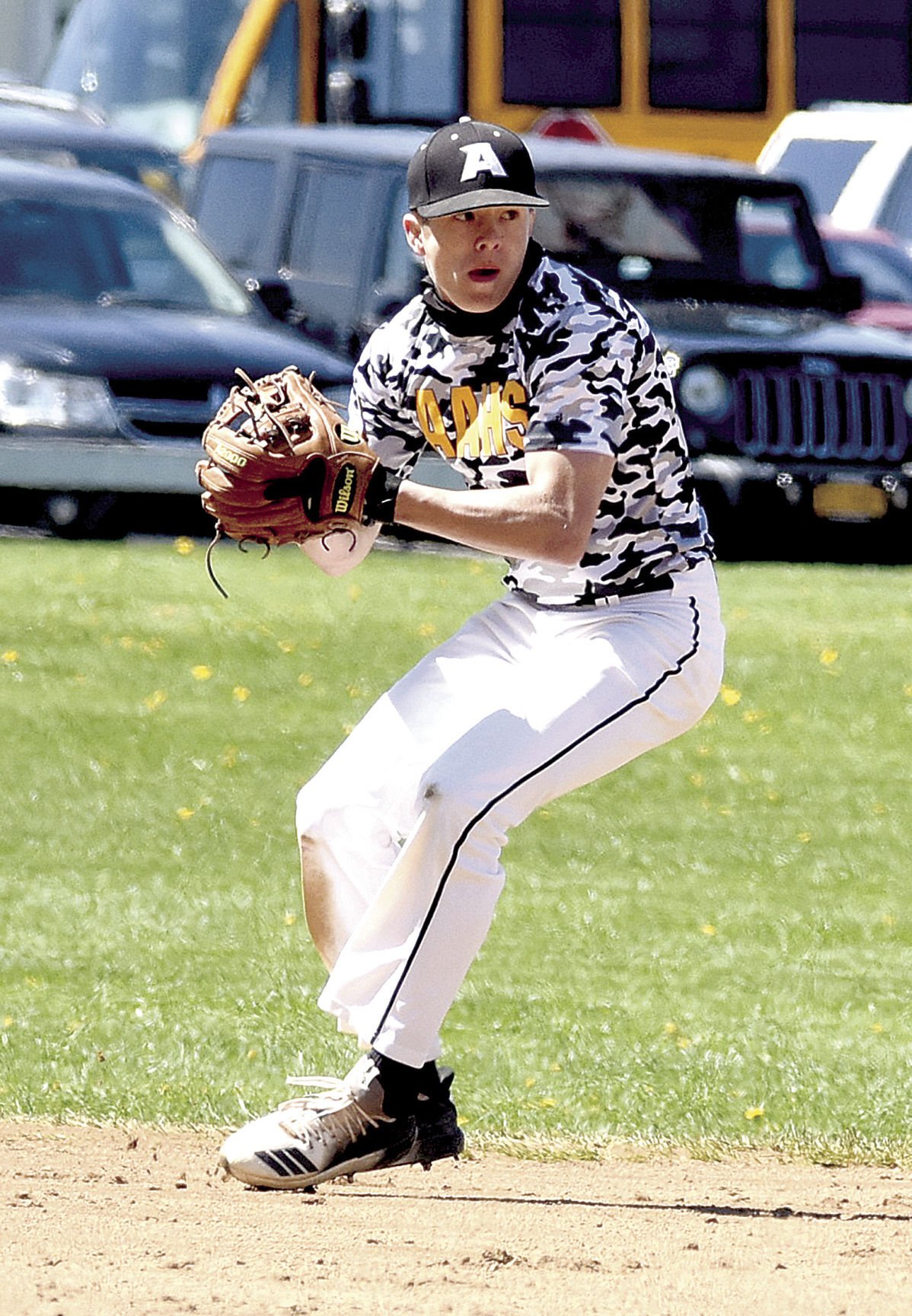 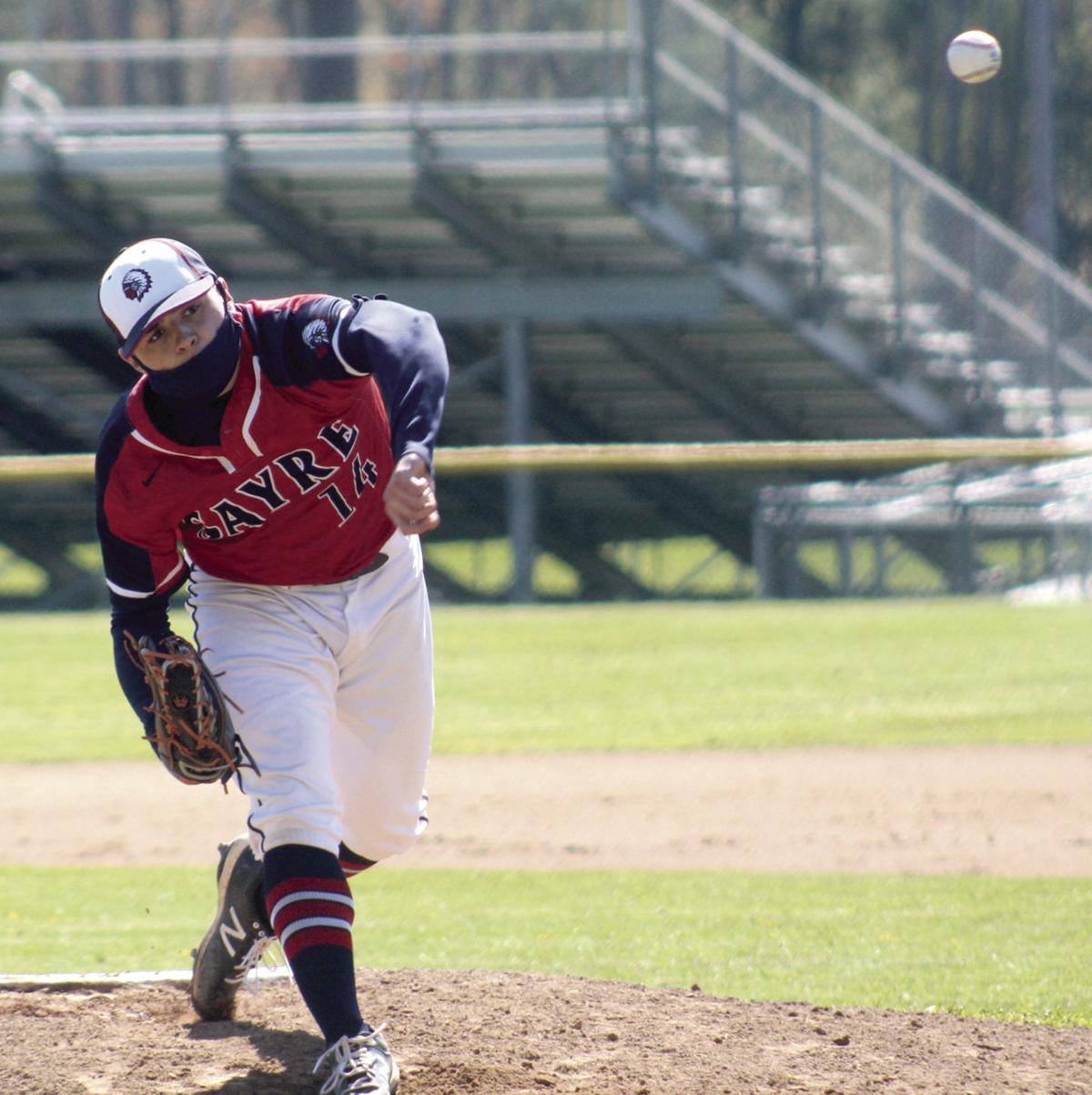 Sayre’s David Northrup watches his pitch sail toward the plate in his team’s game against Tioga Saturday morning.

Tioga’s Cobe Whitmore readies to throw to first in Tioga’s game against Athens on Saturday.

Sayre’s David Northrup watches his pitch sail toward the plate in his team’s game against Tioga Saturday morning.

It’s a rare thing when four squads get together and each goes 1-1 on the day, but that’s what came about Saturday at the border battle among Sayre, Athens, Tioga dand Waverly’s baseball teams.

Sayre won in blowout fashion, then suffered its first loss of the 2021 season via shutout.

Tioga lost its season opener in a big way, then rebounded for a tight win.

Athens took advantage of being in midseason form to get a morning win, then dropped a close one in its second game of the day.

Waverly showed it was playing its first game of the year, then pulled offan upset nobody saw coming.

TIOGA — After a blowout loss earlier in the day, the Tioga Tigers were able to rally and get a solid outing on the mound from eighth grader Conlan Taylor who pitched a complete game in the 5-4 win.

Athens tied the ball game up after being down two runs in the top of the fifth, then the Tigers used the response they needed to get two runs of their own to take a 5-3 lead, which propelled them to a close win.

“Bryce Bailey really stepped up for us today, and he had three clutch hits that really helped us,” said Tioga Head Coach Kevin Evanek. “Conlan has put in a lot of work too, and he pitched well for us today, which is great to see as an eighth grader.”

After getting up a run after one inning, the Tigers turned around and produced another productive inning in the third with the top of the order coming back up. That was when Bailey produced one of two huge hits. He hit a double that dribbled on the first base line into right field. That drove in two runs to give Tioga a 3-0 lead.

Athens would then settle in and score a run in the following inning, followed by two in the top of the fifth that would tie the contest up at three apiece on a two-run single by Cameron Sullivan that followed a walk and a Karter Rude double.

After Tioga responded with two runs from a soft hit by Bryce Bailey and RBI doubles by Cobe Whitmore and Perry, Athens scored one run with just two outs on the board in the top of the sixth inning.

Taylor made his Tioga debut with an impact as he threw just 86 pitches while allowing three earned runs and six hits. He also only walked one batter.

With a runner on third base late in the game, Karter Rude hit a grounder to the Tioga shortstop who threw it over to Cole Williams at first. The close call called him out at the bag, leaving the players and coaches in the Athens dugout skeptical of the crucial call that would have tied up the game. Taylor was able to hold the Wildcats to nothing in the seventh to close out the contested one-run loss for the Wildcats.

“There’s no reason to be upset with the way we played, said Athens Head Coach Charlie Havens. “It was a run-one ball game, we had some good hitting and our defense has been making plays. That’s something we’ve really been working on. Overall we had a 4-1 week, so we’ve been playing well.”

“This is something we can hopefully keep going in the future,” Havens noted. “It’s just a fun day of baseball with good teams and it’s a chance to be with the guys and see the old coaches. It’s overall just a great time.”

The first game of the day in the Valley Border Classic at Tioga High School, saw a less competitive game than the one that followed. The Redskins dominated from start to finish as the bats were on fire to cruise to a 20-2 win over the Tigers without mercy rule.

The Redskins wasted no time as they worked in five runs in the top of the first inning after a 10 a.m. start. They then gave up a run in the following half of the inning. Sayre was unable to score in the next two frames.

The offense then woke up as they had a pair of home runs by Brayden Horton and Zach Garrity in the middle innings. That set up an eight run inning in the sixth that would all but put away the game for the Redskins, helping them secure the impressive 18-run victory.

Zach Moore and Garrity finished off the day leading the visitors with three hits each. Garrity led the team with five RBI. Brayden Horton and Zach Moore contributed four and three RBI respectively. Despite only scoring two runs as a team, Bryce Bailey led the Tigers offense with three hits.

On the mound, David Northrup had 11 strikeouts for the Redskins in five innings pitched. Derrick Gauge led the Tigers with four strikeouts in defeat.

“We haven’t played a game in three years, and we ran into a buzzsaw today with Sayre,” said Evanek. “We know how good they are but we’re getting to settle in.”

The game lasted nearly three hours as Tioga played shortly after the first game ended with their matchup against Athens, while Sayre got on the bus and took the bus ride to Waverly where they suffered their first loss of the season in surprising fashion.

WAVERLY — After dropping its opener to Athens, Waverly plated single runs in the first, third and sixth innings to get the win in a game that saw just six total hits combined.

Sayre pitching issued just five walks, but each of Waverly’s three runs came after a walk.

In the sixth, Kaden Wheeler worked a one-out walk and scored on a two-out double by Brady Blauvelt.

On the other side of the coin, Waverly’s Caden Hollywood threw a three-hit shutout, striking out two.

Blauvelt had a double and an RBI for Waverly and Tomasso had a hit and an RBI, while Brennan Traub had a hit in the win.

Hand scored two runs and Kaden Wheeler scored a run, while Beeman had an RBI.

Zach Garrity had two hits for Sayre and Jake Burgess had a hit for the Redskins.

In the opener Athens broke open a tie game with a five-run fifth inning.

Athens tied things in the second and that’s the way things stayed until the fifth, when Athens broke things open.

In the second, an error off the bat of Lucas Kraft, a walk to Kaden Setzer and Gage Warner’s single set the table. Kyler Setzer sent one run home with a single and Kaden Rude’s double tied the game.

Athens’ winning rally started with a two-out walk to Jaren Glisson. Kaden Setzer and Warner were plunked to load the bases. Then Kyler Setzer singled home two runs and Rude drove one in. A pair of errors allowed the last two runs to score.

Hand, Tomasso, Hollywood, Wheeler and Traub all had hits for Waverly.

Hand, Jay Pipher and Tomasso scored runs for Waverly and Hollywood and Traub had RBI.