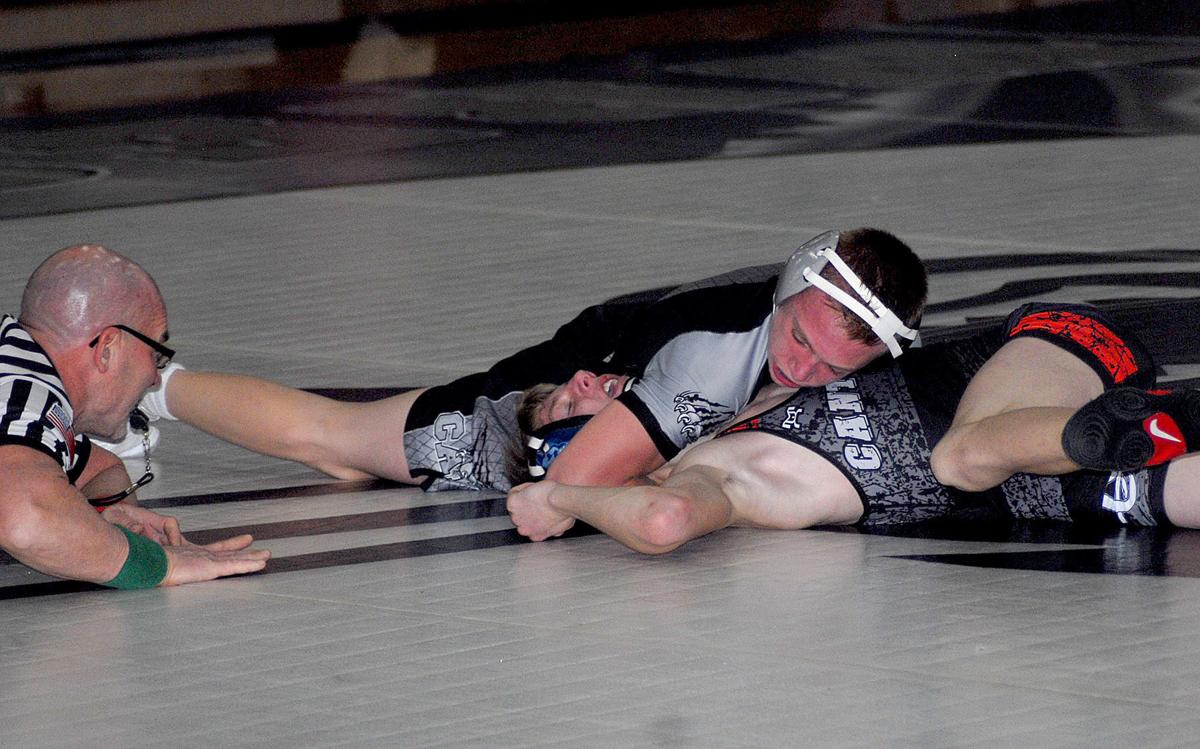 Athens’ Kaden Setzer picks up the fall over Canton’s Bailey Ferguson in their 120-pound match on Tuesday. 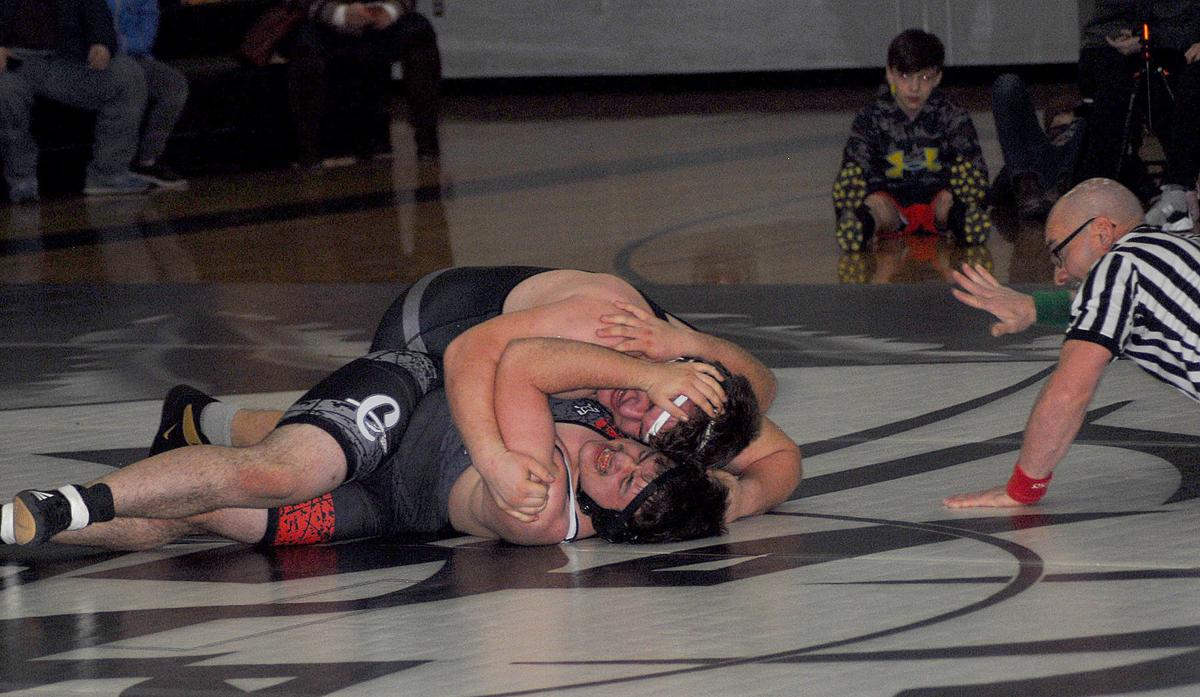 Athens' Keegan Braund looks for the pin against Canton's Trevor Williams at 285 pounds on Tuesday. 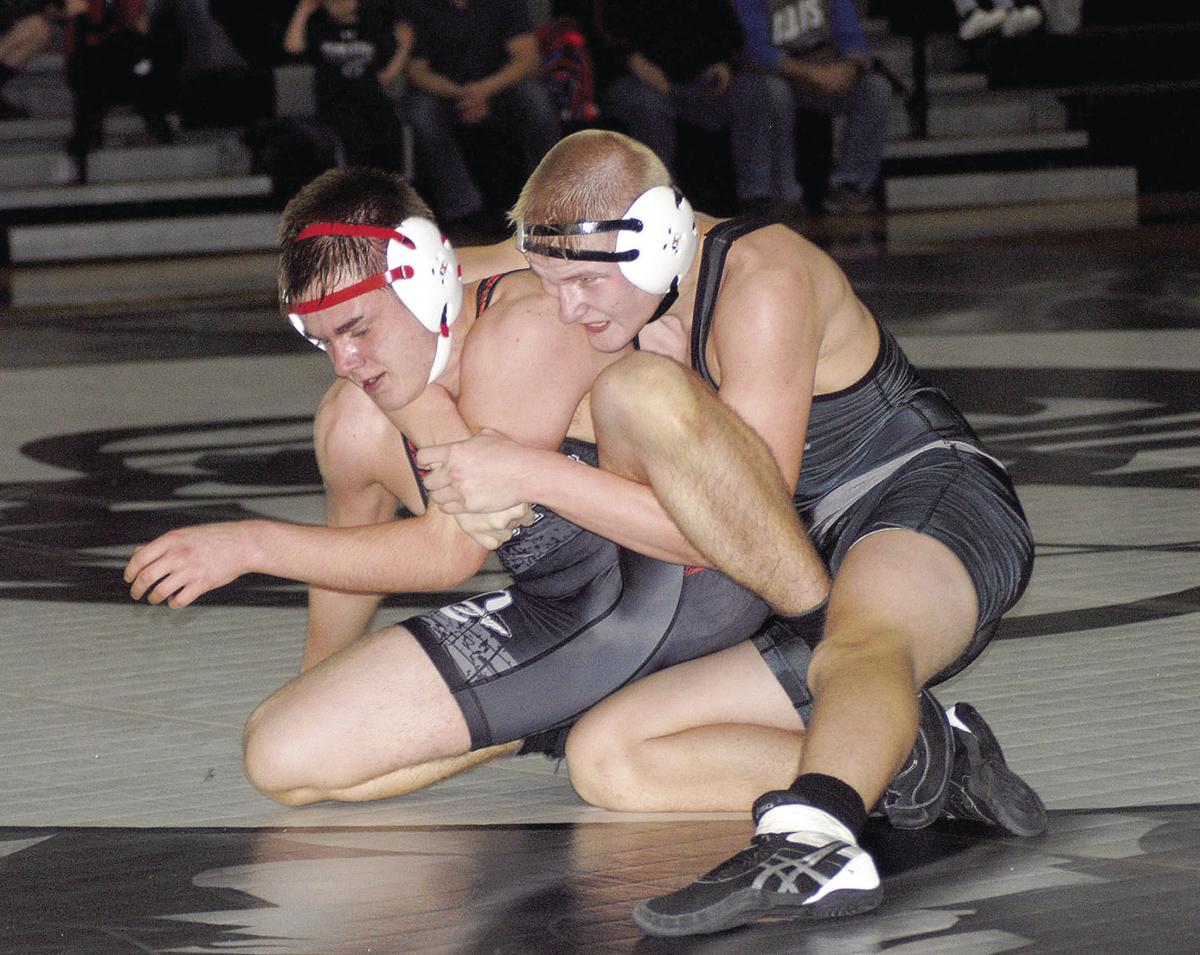 Athens’ Zach Stafursky locks up a cradle on Canton’s Zeke Gilliand at 160 pounds on Tuesday.

Athens’ Kaden Setzer picks up the fall over Canton’s Bailey Ferguson in their 120-pound match on Tuesday.

Athens' Keegan Braund looks for the pin against Canton's Trevor Williams at 285 pounds on Tuesday.

Athens’ Zach Stafursky locks up a cradle on Canton’s Zeke Gilliand at 160 pounds on Tuesday.

ATHENS — The Athens Wildcats pulled out some big wins on Tuesday night to put themselves in position to knock off the Canton Warriors in a matchup of the top two teams in the Northern Tier League wrestling standings.

Unfortunately for the host Wildcats, it wouldn’t be enough as Canton’s Brenen Taylor picked up a pin in the final bout of the night to give the Warriors a thrilling 39-38 win.

“Wow, that was pretty interesting. You figure up every way possible on paper, that’s what coaches do, we do our homework. You can figure out every way you want and it never comes out the way you think it’s going to,” said Canton Head Coach Lyle Wesneski. “Someone always has to step up. I’m happy for Brenen. He’s a ninth grader wrestling (152 pounds) and he’s had some tough ones lately and he just keeps working and working and I’m happy for him.”

The win pushes Canton to 6-0, while Athens falls to 5-1 in the NTL standings.

The match began at 160 pounds with Athens’ Zach Stafursky breaking a 4-4 tie in the third with a reversal. The Wildcat was then able to pin Canton’s Zeke Gilliand in 4 minutes, 54 seconds to put Athens up 6-0.

Canton standout Timmy Ward responded as he racked up a 9-1 lead over Alex West in the 170-pound bout before picking up the fall at 5:05 to tie things up.

The Warriors took their first lead thanks to a pair of forfeit wins. Chance Deljanovan (182) and Garrett Storch (195) accepted the free points to make it 18-6.

The Wildcats desperately needed to stop the bleeding — and senior Keegan Braund did just that.

The Athens heavyweight dominated his match with Trevor Williams — he was up 11-3 in the third — before he got the pin at the 4:59 mark.

The rally didn’t last long for the Wildcats as Canton’s Isaac Landis turned the tables with a pin against Athens’ Kyler Setzer at 106 pounds.

Now trailing 27-12, the Wildcats would start clawing back when Gavin Bradley accepted a forfeit at 113 pounds to make it 27-18 with six bouts left.

Athens’ Kaden Setzer got the home crowd going at 120 pounds as he stuck Canton’s Bailey Ferguson midway through the third period. Canton’s lead was down to 27-24.

Athens’ Aiden Garcia controlled his 126-pound bout and would use a late takedown to secure a 10-2 major decision. The bonus point put Athens up 28-27.

Hayden Ward responded for the visiting Warriors. The 132-pounder would pin Athens’ Lucas Forbes in 31 seconds to put Canton back on top, 33-28, with three matches remaining.

Athens went back in front thanks to Brandon Jennings at 138 pounds. The Wildcat had Canton’s Miah Lehman on her back several times, but the Warrior never gave up the six and Jennings had to settle for a 16-5 major. Canton’s lead was now just 33-32.

The Wildcats went back in front when Karter Rude picked up a big fall at 145 pounds over Canton’s Riley Parker.

The home crowd was celebrating a 38-33 lead with just one match left, but Canton’s faithful would have the last laugh.

Taylor wasted no time in taking down Athens’ Jaden Wright and the Warrior picked up the match-winning fall in 59 seconds.

Despite the heartbreaking loss, Athens Head Coach Shawn Bradley was happy with his team’s effort.

“The kids gave a great effort — it’s just the ball doesn’t always bounce your way,” said Bradley, who noted tough wins for Rude and Kaden Setzer. “The kids stepped up. Karter and Kaden were nursing some injuries, but (they won) and those were some good kids. That’s what it takes, especially going into the postseason.”

The Wildcats were also without starter Jake Courtney (113-120), which made it a bit easier for the Warriors to set up the matchups they wanted.

“Not having Jake hurts a little bit. They can dodge Gavin (Bradley). If we have Jake, then we’re in a better spot, but the kids that wrestled (tonight), you know what? Saturday to today is about 900 times better effort,” said Coach Bradley.

The Wildcats will now look to finish off the NTL season strong and maybe make a run in the District IV Duals before the individual postseason begins.

“If we can get a match in and make it to Milton (for D4 Duals), it would be great. It would be fantastic for these guys,” said Coach Bradley. “They are working hard. The effort has been hit and miss, but today the effort was there and it showed. These guys looked good today. We (needed) a fall here, a fall there — they were there and we just didn’t pick them up.”

The longtime Athens coach was happy to see a large crowd cheering on the Wildcats and Warriors.

“That’s two matches in a row we’ve packed it up pretty good so that’s good. The kids get a nice atmosphere, it’s fun,” Bradley said.

“That was a fun match, back and forth,” he said. “I think the crowd got their money’s worth tonight, and I know my blood pressure is high right now. I have to go home, go for a walk or something to calm down, but it was fun, that’s what it’s all about. Good for the sport, good for wrestling, good for the crowd.”