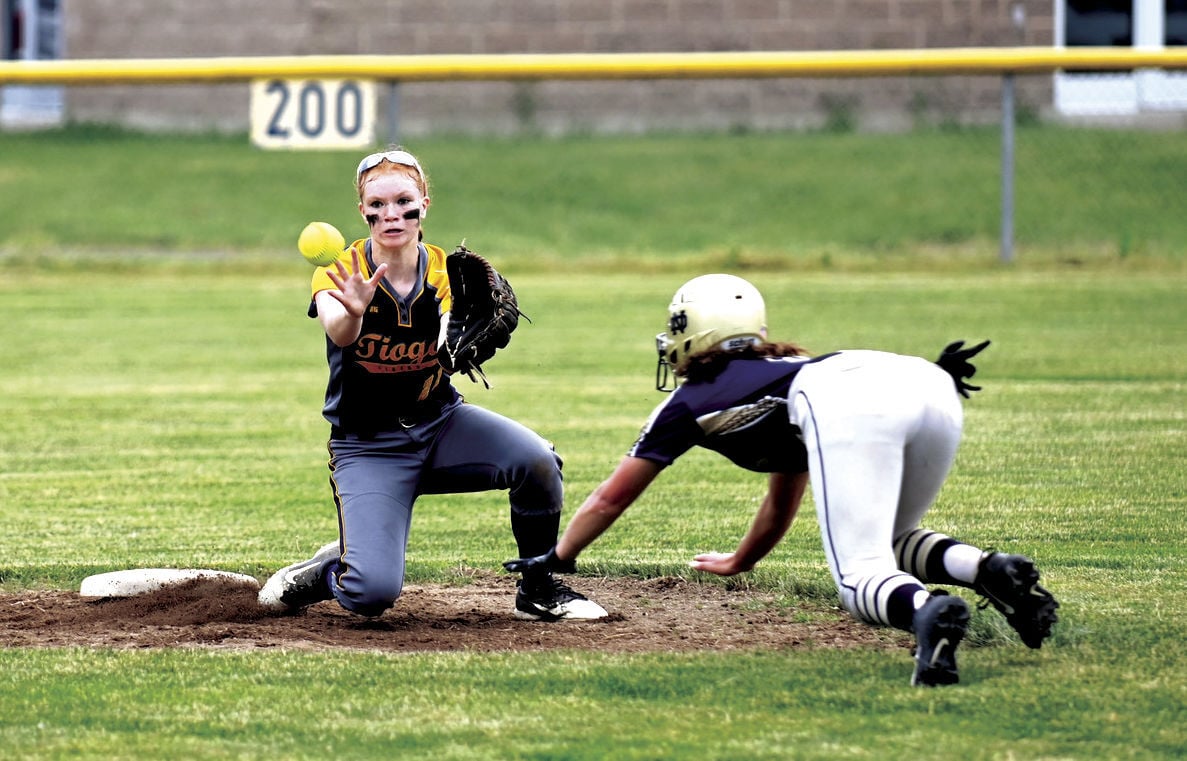 Tioga shortstop Olivia Ayres awaits the throw to prevent a stolen base. 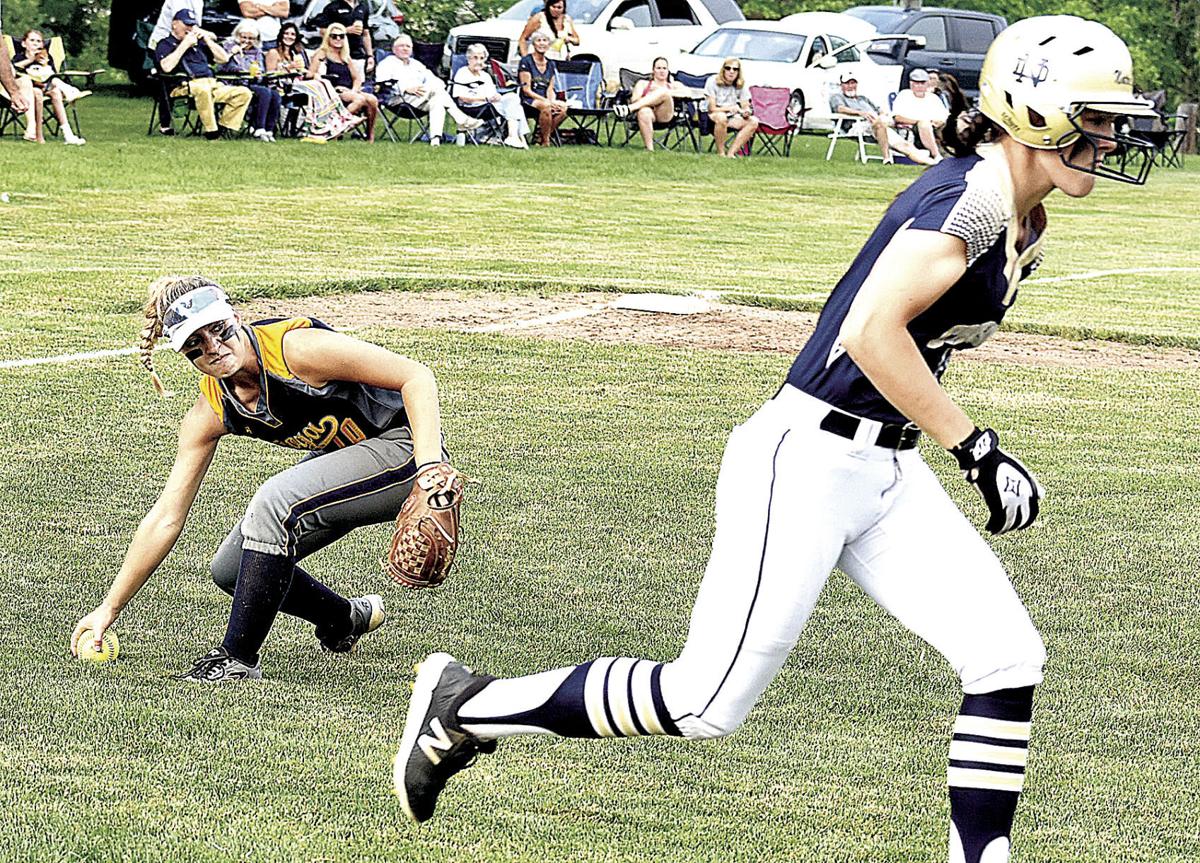 Tioga’s Kindra Wessels fields a ball to throw out a Notre Dame base runner. 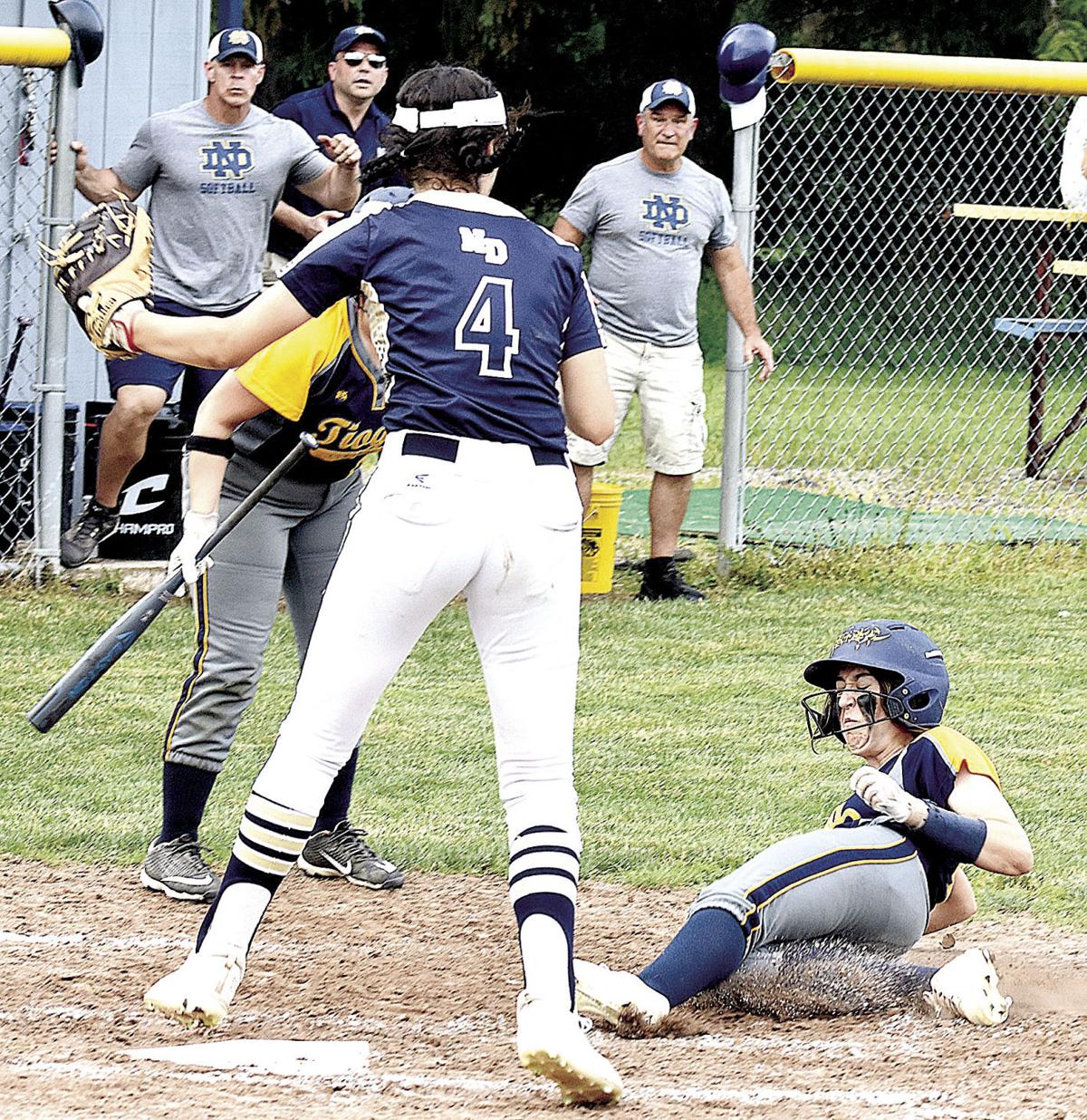 Tioga shortstop Olivia Ayres awaits the throw to prevent a stolen base.

Tioga’s Kindra Wessels fields a ball to throw out a Notre Dame base runner.

ELMIRA — Elmira Notre Dame used the long ball to build an early lead against Tioga in a Section IV Class C semifinal softball game on Wednesday. Later in the game, the Crusaders capitalized on poor execution by the Tioga defense to secure a 9-5 win.

Notre Dame bolted out to a 3-0 lead in the bottom of the first courtesy of a bomb by Lawson Bigelow. With one run already on the board and a runner on second, Bigelow belted a ball over the centerfield fence.

The score held until the bottom of the fourth when the Crusaders tacked on another run. Shannon Maloney sacrificed to move Paige Harvey to second base. Harvey rounded second and headed to third. Tioga’s rushed throw to third was off target and Harvey came home for the run.

Tioga closed the gap in the top of the fifth. Austyn Vance and Alissa Hine batted their way on base. Vance scored on a passed ball while Hine advanced to third. Hine later scored on an errant throw from the catcher on a pick off attempt. Tioga pulled within two runs, 4-2.

But, in the bottom of the fifth, Notre Dame once again flexed its muscles at the plate. Ava Mustico drove a ball over the left field fence that plated both her and Madison Gleason. Notre Dame’s lead was back to four, 6-2.

Undaunted, the Tioga bats continued to produce in the top of the sixth. Kindra Wessels drove in Olivia Ayers on a well-hit ball up the middle. Abby Foley scored on a ground ball by Mykenzie Thetga. Tioga pulled within two runs again, 6-4.

Tioga began to force plays in the bottom of the sixth and committed multiple throwing errors attempting to get outs. Head Coach Heather Klossner admitted that failure to execute was a struggle for the Tigers.

“All season long, we’ve made some errors that have been costly,” she said. “We don’t let it get into our heads. But against a team like Notre Dame, a good team, you can’t give them extra outs.”

Notre Dame used the extra outs to score three more runs and extend its lead to 9-4.

Tioga managed to generate one run in the seventh inning. Ayers drove in Gabby Foley on a ground ball through the infield. But, Notre Dame ended the inning without any further threat and the win, 9-5.

The loss ends Tioga’s season. Klossner offered a heartfelt reflection on her team’s work ethic throughout the season

“They are hard workers. They are honest about what they need to work on. We’ve made a lot of progress.”

She also lauded her seniors as great leaders.

Senior Olivia Ayers led the Tigers at the plate, getting a hit, a run and an RBI. Kindra Wessels pitched the complete game and struck out four.

Notre Dame advances to the championship game Friday against Deposit/Hancock.