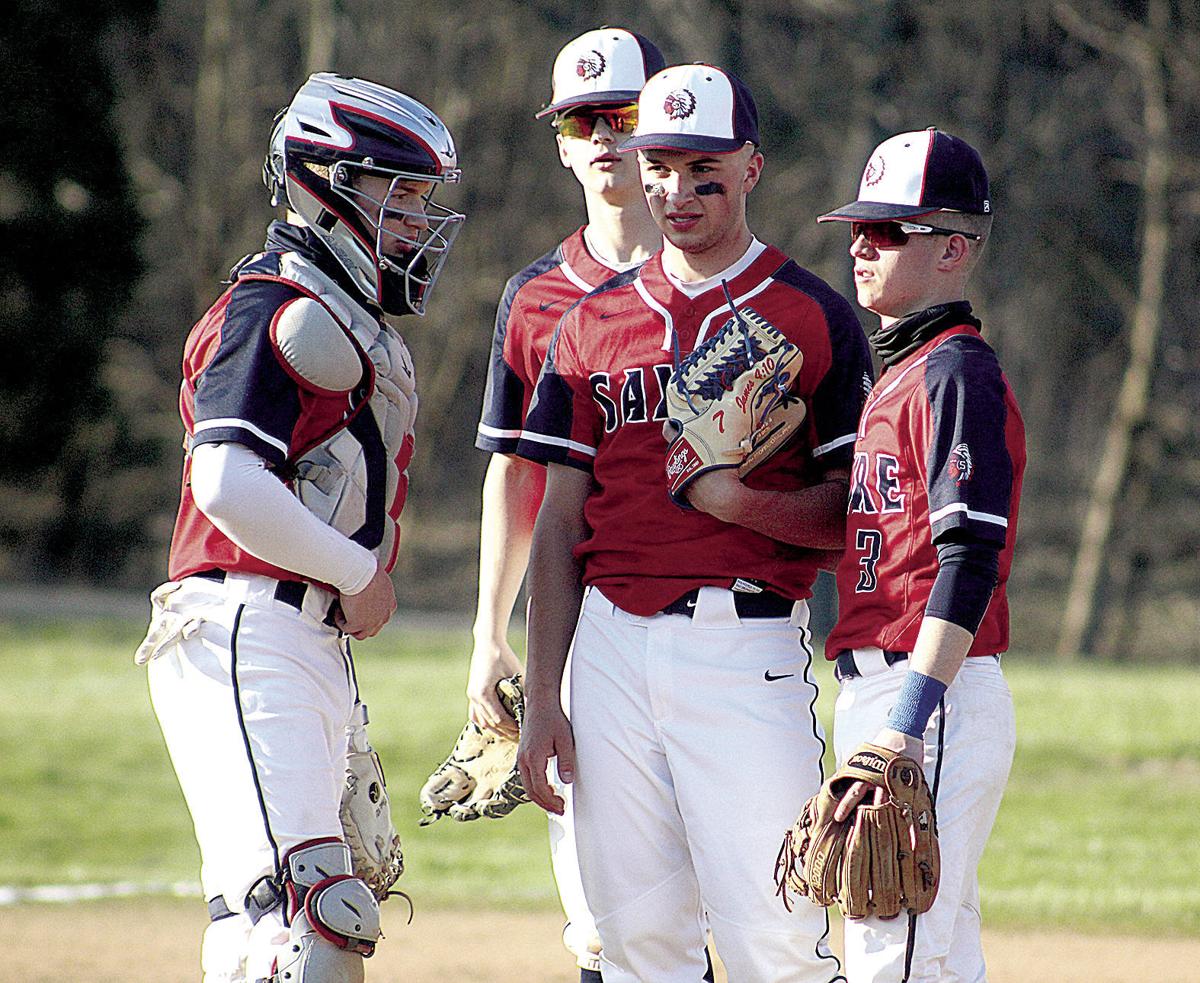 From left to right, Brayden Horton, Jackson Hubbard, Luke Horton and Jake Burgess talk things over in a mound meeting in their team’s win over Canton on Tuesday. 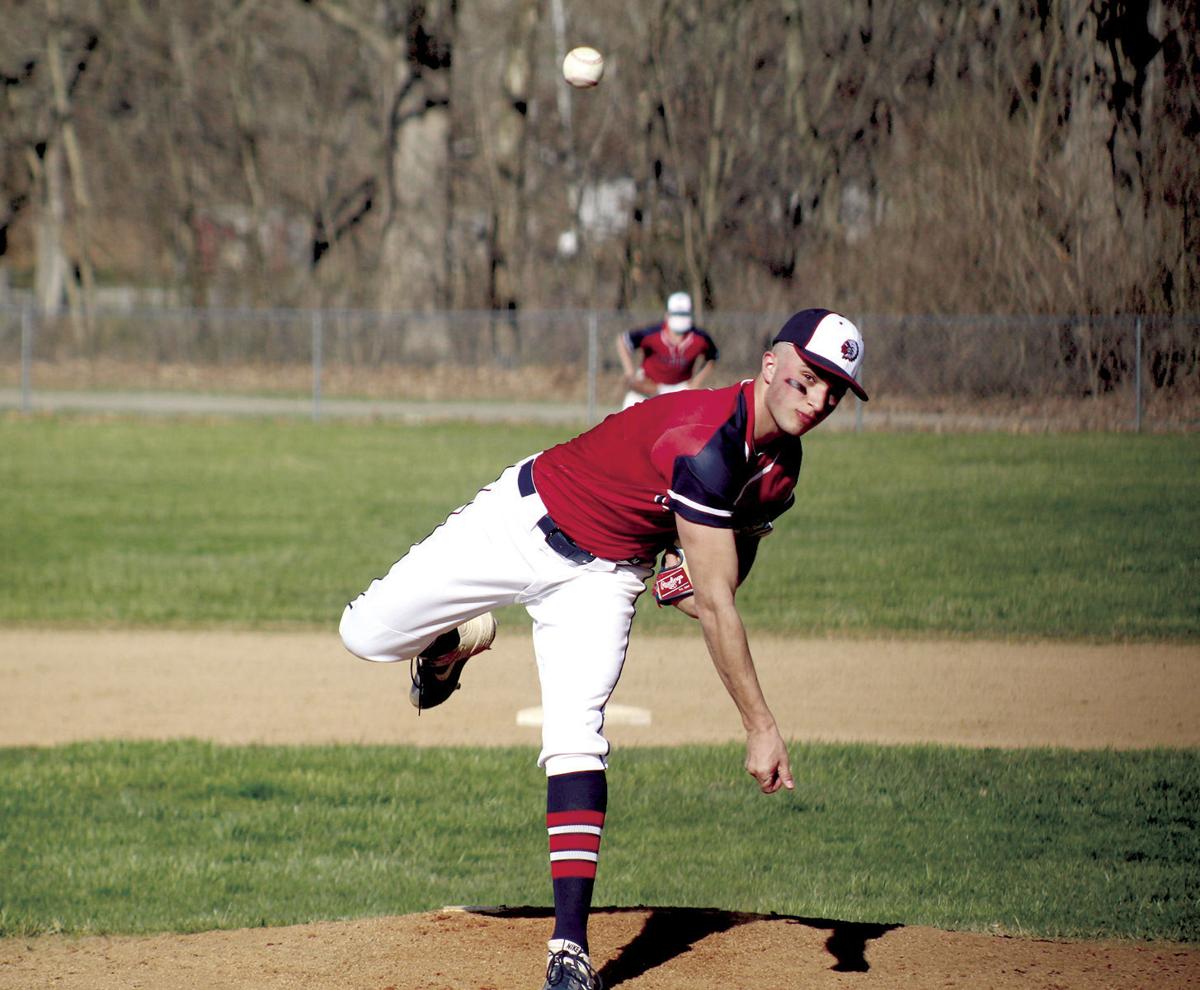 Sayre’s Luke Horton fires a pitch toward the plate during his team’s win over Canton on Tuesday.

From left to right, Brayden Horton, Jackson Hubbard, Luke Horton and Jake Burgess talk things over in a mound meeting in their team’s win over Canton on Tuesday.

Sayre’s Luke Horton fires a pitch toward the plate during his team’s win over Canton on Tuesday.

SAYRE — The Sayre varsity baseball team used their bats in a big way in their 2021 home opener against NTL foe Canton, a top challenger to Sayre in the league. The Redskins used a pair of seven-run innings to get by the Warriors in a mercy rule ending in the bottom of the sixth inning, winning by a score of 20-7.

The contest ended on a grand-slam from sophomore Kannon VanDuzer who finished with six RBIs off four hits. He also kept his streak alive of two consecutive games with home runs.

“In the first three innings I was really happy with how we hit the ball,” said Sayre Head Coach Jamie VanDuzer. “We did go a few innings in the middle where we didn’t hit the ball as well, but Canton pitched the ball well.”

In the bottom of the second, the Redskins rattled off seven runs, starting with Jake Burges, whose RBI sparked a huge run, giving the home team all the momentum it needed.

Down 10-0, Hayden Ward scored a run for the Warriors to to keep[ the game in play.

In the bottom of the third inning, Sayre held a 10-1 advantage. Zach Garrity drove in two runs on a fly ball to center field that dropped in for a double. That gave his team an 11-run advantage heading into the fourth.

Canton scored two runs and held Sayre to none in the fourth to keep the game alive with a score of 12-3 going into the fifth inning.

Canton then sparked a run, as they outscored Sayre 4-1 in the next innings as it looked the Warriors had a chance to get back into the game. The Redskins made a pitching change from Horton to VanDuzer as they led 13-7 going into the bottom of the sixth inning.

Sayre would then use its second big run capped off by a VanDuzer grand slam to put up 20 runs on the board in the 13-run victory.

Carter Route of Canton and Horton each had three strikeouts in the contest as starting pitchers.

Horton pitched through four innings in the game for Sayre.

“Luke pitched very well today and I’m happy with the way he stayed in front of the count,” VanDuzer added. “He’ll be the first to tell you that he has a lot left in the tank, but he threw the ball well.”

Canton falls to 3-1 after the loss and will have a home game on Friday against Muncy.

Sayre now puts itself in contention early on for the team to beat in the NTL as they improve to 2-0. They will have a big home contest on Friday against South Williamsport, which also looks to be one of the top teams in District IV this season.

ATHENS — Host Athens plated four runs in the second and four more in the fifth, then eased home from there.

Mason Lister’s lead-off single ignited Athens’ big second-inning rally. He stole second and third before scoring on a passed ball. Kyler Setzer laced a two-out single to restart the rally. He advanced on a balk and a stolen base before scoring on Kaden Setzer’s RBI single. Jared Peterson reached on a dropped third strike and both scored behind Kaden Setzer on a two-run double to left by Karter Rude.

Rude opened the fifth with a base on balls, stole second and went to third on a Tucker Brown single. Cameron Sullivan’s RBI single sent Rude in, then Ben Vough, who came in to run for Brown, and Sullivan scored on an error off the bat of Lucas Kraft. Kraft later scored on a Kaden Setzer double.

In the top of the seventh, Towanda’s Alex Bowman reached on a fielder’s choice and scored in an RBI double by Aaron Bardell.

Lister started on the hill for Athens. In his 6 1/3 innings, he allowed just one hit, one earned run and four walks, striking out 10. Rude got the last two outs, allowing a hit and a walk with one strikeout.