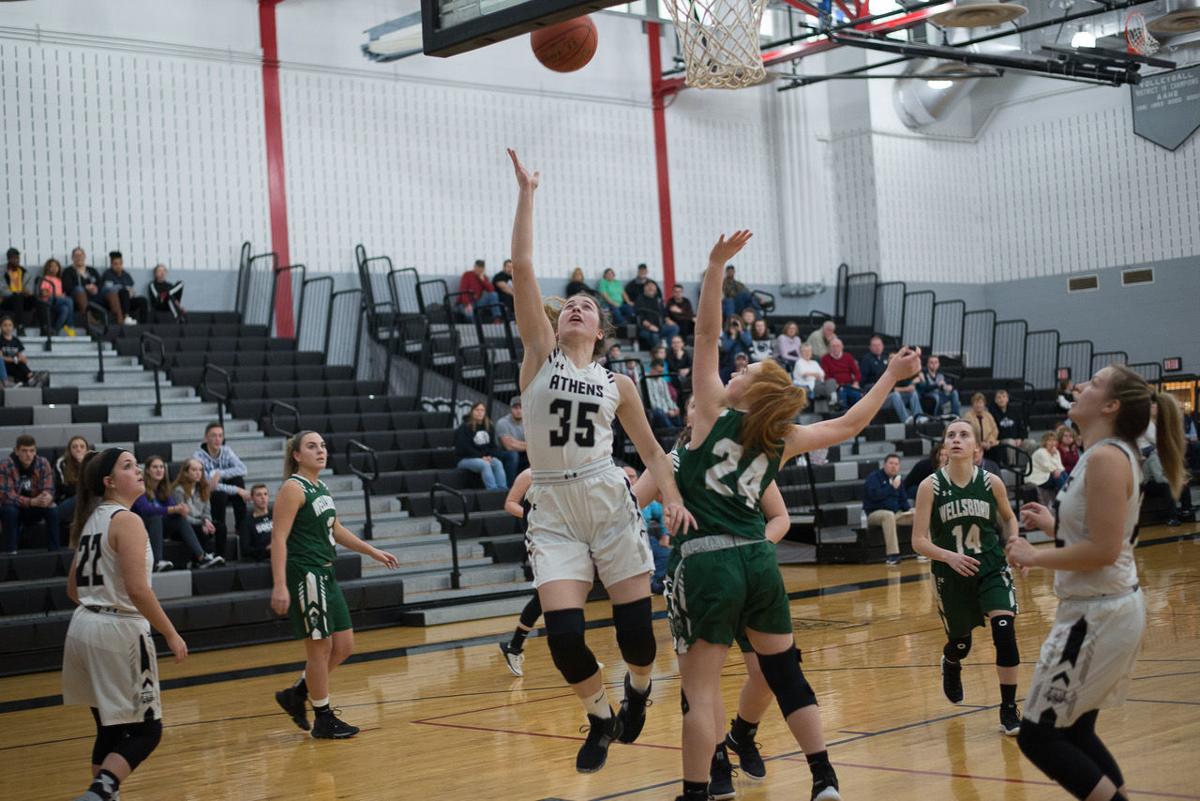 Caydence Macik, of Athens, puts up a layup against a Wellsboro defender. Macik would finish the game with a double double. 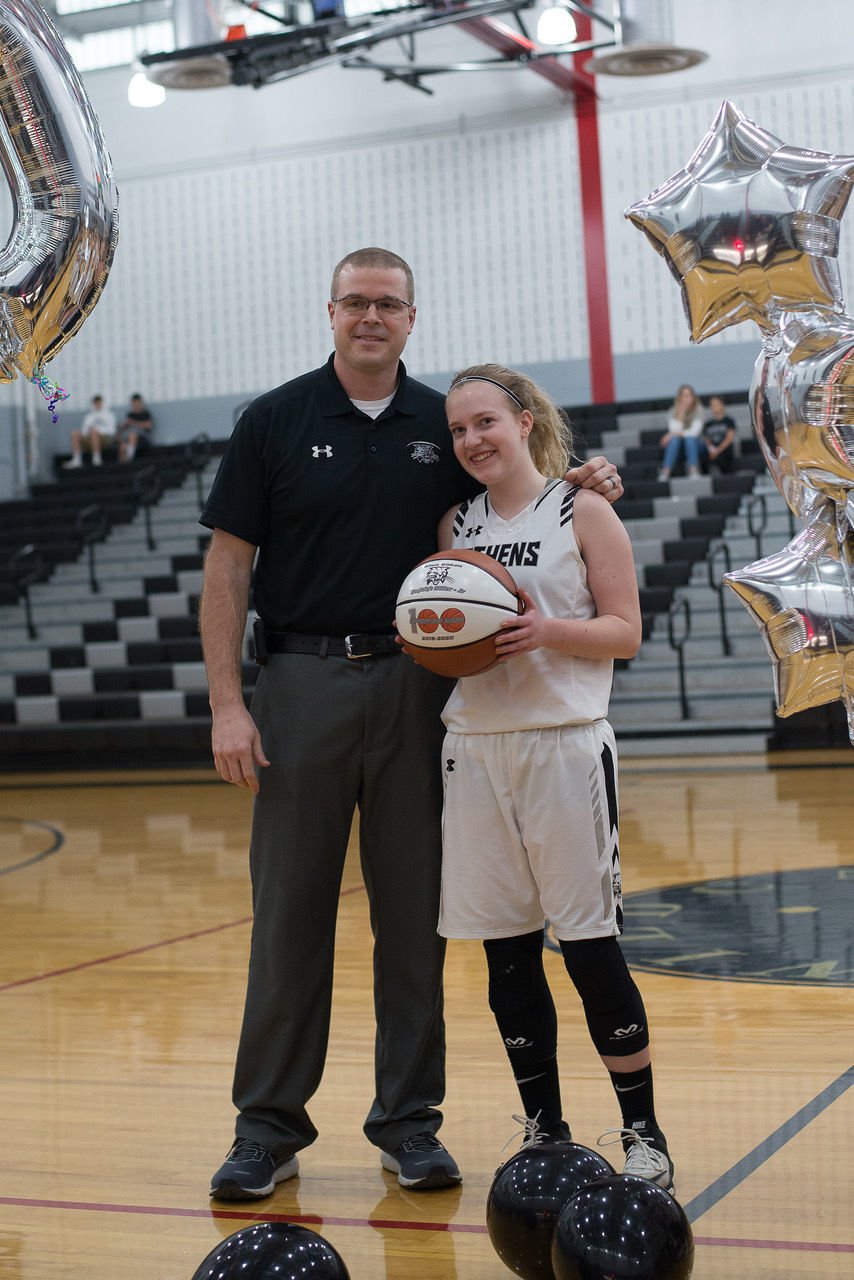 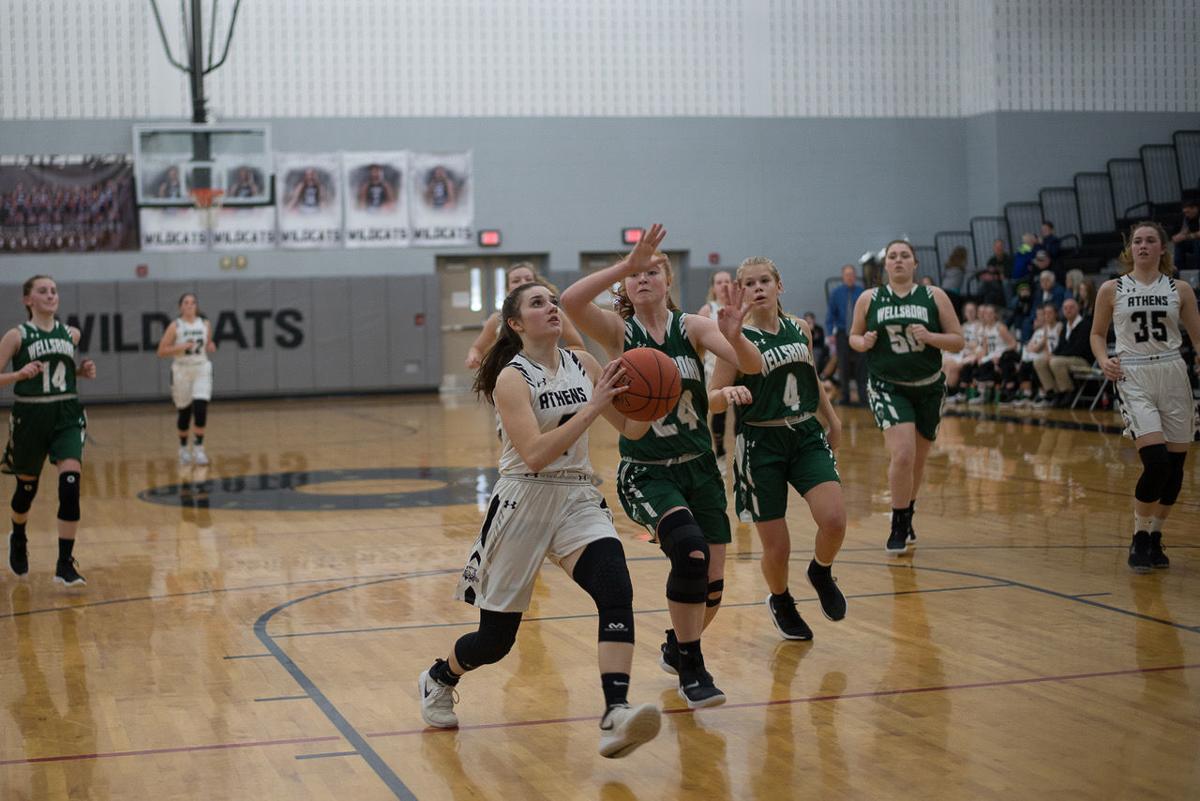 Athens’ Haley Barry beats the Wellsboro defense to the basket. Barry led all scorers with 20.

Caydence Macik, of Athens, puts up a layup against a Wellsboro defender. Macik would finish the game with a double double.

Athens’ Haley Barry beats the Wellsboro defense to the basket. Barry led all scorers with 20.

Athens — On an afternoon when Kayleigh Miller was honored for offensive accomplishments, the Lady Wildcats used stingy defense to squash a second half threat from the Green Hornets in a 50-33 win over Wellsboro.

Miller was recognized before the game for hitting over one hundred three-pointers in her career. She actually hit the milestone shot in Thursday’s game at Sayre. Coach, and dad, Brian Miller expressed praise and hope.

“I am really proud of her,” he said. “She puts in a lot of time people don’t see. Hopefully she can keep it going this year and next year. There’s no telling where she’ll end up.”

After the recognition ceremonies, Athens took control of the game against Wellsboro early.

The Wildcats built a 20-4 lead midway through the second quarter and went into halftime with a 20-8 lead. Athens was moving the ball on offense and five different girls scored in the first half. Wellsboro’s star, Catherine Brought, was on the bench in foul trouble.

Wellsboro broke through the stingy Athens defense in the third. They put nineteen points on the board. Miller credited Wellsboro’s Catherine Brought for their success.

“I thought we were in the right place, she just made shots. She made some big baskets.”

Offensively, Athens did enough to keep the lead at 33-27, but the Hornets were closing the gap.

The Wildcats’ defense returned to form in the fourth as Athens went on a 17-5 run to secure the victory.

Offensively, Haley Barry erupted during the run with two three-point plays and 10 points in the quarter.

Barry led the Wildcats’ offense with 20 points for the game. Caydence Macik supported her with 11 points and Miller added nine. Macik also brought down 10 rebounds for a double-double.

Wellsboro dominated most of the game, leading 21-12 after three quarters.

Athens held the Green Hornets scoreless in the fourth while Hannah Blackman led the offensive surge with all six of her points in the quarter.

Karlee Bartlow was the leading scorer for the Wildcats with 10 points.

Wellsboro was led by Emma Brandenburg with eight points.

SAYRE — Saturday afternoon’s matinee went down hill early for the home team as the Tigers took a 15-4 lead into the second period and led 32-9 at the half.

“Mansfield came to play,” said Sayre Coach Eileen Sparduti. “They’re fast and athletic. They took our strengths away. We are obviously struggling right now. We need to regroup with some approaches and player roles. But we have some good practice time in the gym next week which will help.”

JoAnne McNamara had 20 points to lead NP/M, netting just eight in the first 16 minutes. Jaime Palmer had seven of her total of nine points in the first half, and Lizzi Welch had all six of her points in the second quarter. Shaelyn Berguson netted eight points for the Tigers.

TIOGA CENTER — Delhi’s Alex Haight netted 22 of his 24 points in the first half, and Tioga’s difficult season continued as Delhi improved to 9-1 on the season.

Tyler Bruce scored 10 of his 16 in the third quarter and Rick LaLosh had all eight of his points after the half.

Sam Taylor scored 17 of his team-high 19 points after the half and Derrick Gage scored six points for Tioga.

The Tigers will host Notre Dame on Tuesday.