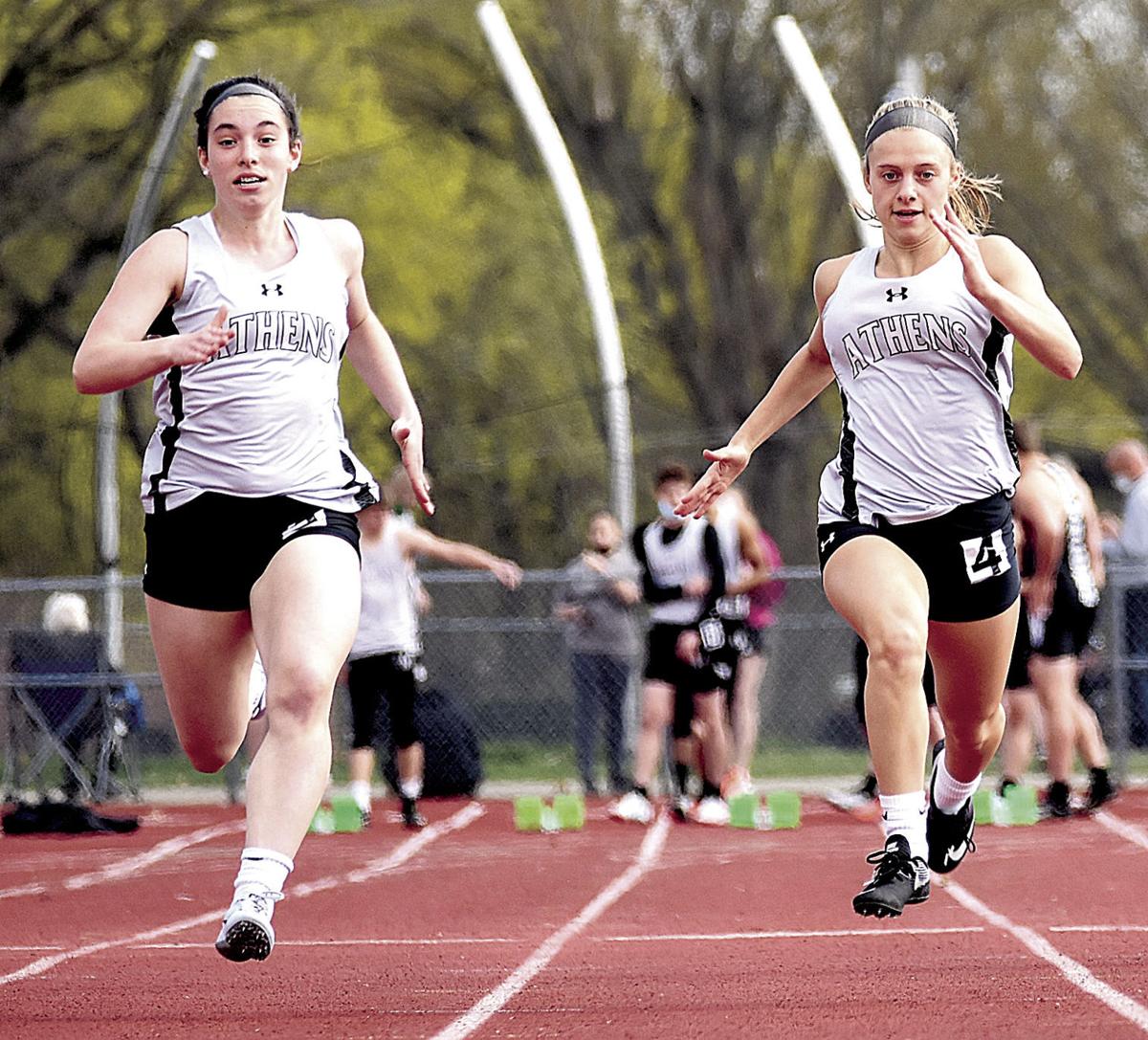 Athens’ Emma Bronson, the Times’ Track Athlete of the Year, runs at the District IV Championships.

Athens’ Emma Bronson, the Times’ Track Athlete of the Year, runs at the District IV Championships.

Emma Roe entered her senior season without sprints on her resume. She had run a few 100-meter dashes, but as a sophomore in 2019 she was a middle-distance runner with the 400 and 800 as her specialties.

Coming into the 2021 season, though, Athens needed her to help the team score by running the shorter distance races. Of course, she made the switch and starred.

The field athlete award was a tougher nut to crack. Two athletes — Athens teammates Mya Thompson and Emma Pernaselli — stood atop our standings in two events, dominating one. In the end we chose Pernaselli, who was among the top three in three individual throwing events as our Field Athlete of the Year. She had the area’s best distance — by over 30 feet — in the javelin at 94-0 and had the best effort in the shot put at 28-11 1/4. She was also third in the discus with a best of 84-2.

In a year that was as uncertain as 2021, there was a ton of parity. In many cases there’s a different person atop our local top-five in each event.

Not all of Roe’s times in 2021 were personal bests, but her PR in the 100 had been 13.7, nearly a full second slower that this season’s time. This season was the first time Roe had run the 200, so this season’s time is a PR by default. When she was running middle distances, her best in the 400 was 1:02 — basically a push.

Roe, who will be playing soccer at NCAA Division I Wagner as a freshman in the fall, used her other activities to help stay in shape while most of us were sitting on our tuffets waiting out the pandemic.

“I did club soccer and school soccer and I also was a competitive dancer,” she said. “On my own, I did lift workouts and running.”

That’ll keep anyone busy and in shape.

She said that, while not having a junior season was less than optimal, she moved on.

“It was disappointing, in a sense, to not have my junior year, but I feel that my senior year made up for it and I’m so thankful for the coaching staff and the administration to make my senior year as special as it was due to circumstances.”

Roe said she was really happy to have the chance to compete.

“It was very exciting. I was super thankful that Athens allowed us to continue with our sports seasons my senior year and I was able to do all three of the sports that I was in. Track was extremely fun and I’m so glad that the coaches were able to make everything happen the way they did.”

Roe said that she wasn’t expecting the change in events she was running from her sophomore year.

“I was going into my senior year thinking I was going to stay mid-distance with the 400 and 800, but during training at the very beginning of the season they saw that I had an opportunity to gain more points for our team in shorter distance races and I took that opportunity to help the team and the coaches.”

She added that, although the events in which she competed were different, she had been training at the shorter distances in addition to the longer distances anyway.

“My workouts were shorter distance, but a lot more of the sprints.”

Roe noted that like sprints, soccer includes a lot of short sprints so she was well prepared to run the sprints, adding “and being a dancer I had a lot of fast twitch muscles and also a lot of cardio to stay in shape and keep my stamina high.”

Below is the Morning Times Girls All-Star Track & Field team: