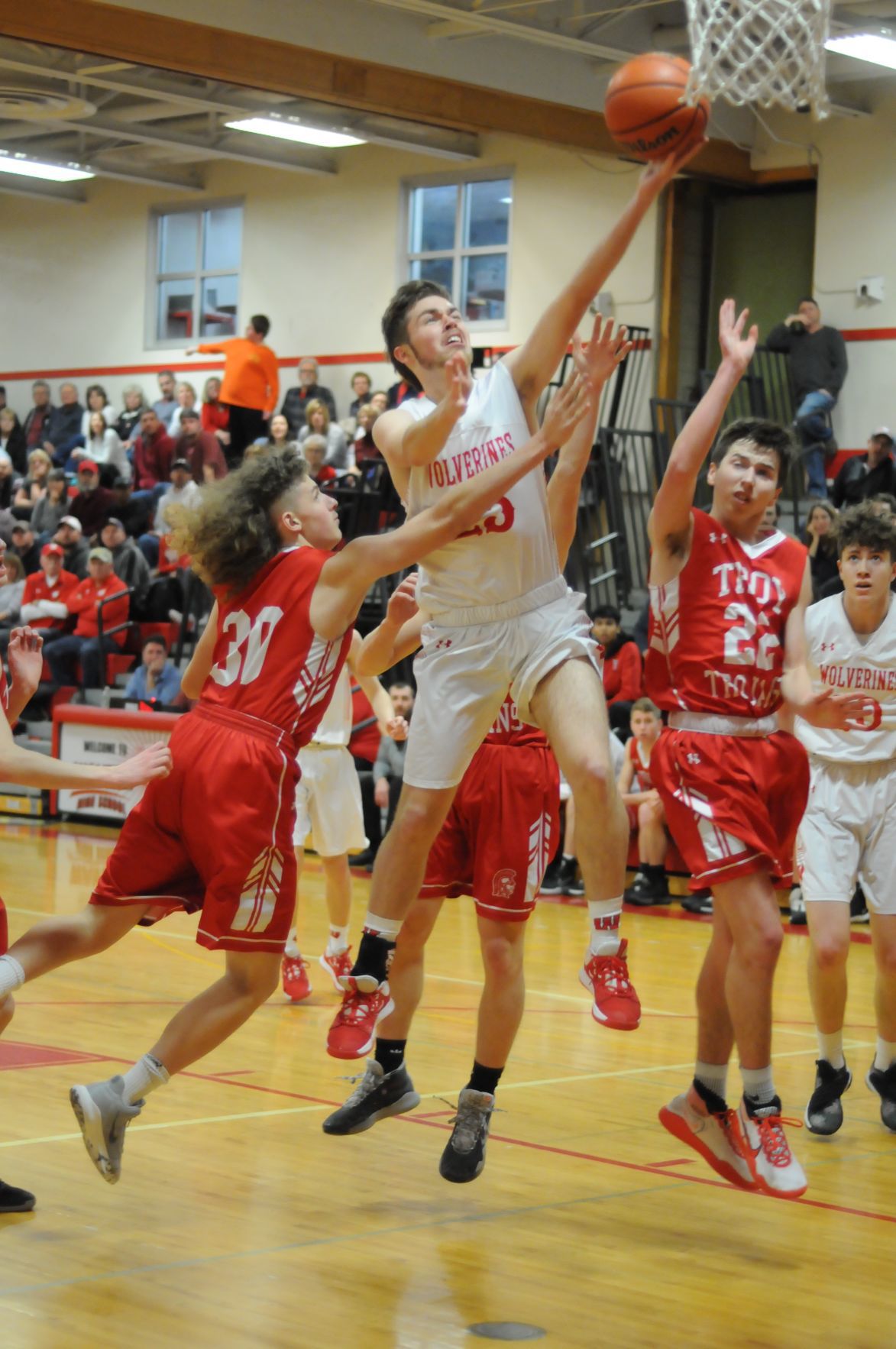 Caden Hollywood of Waverly goes up with the finger roll during his team’s game against Troy Monday night. 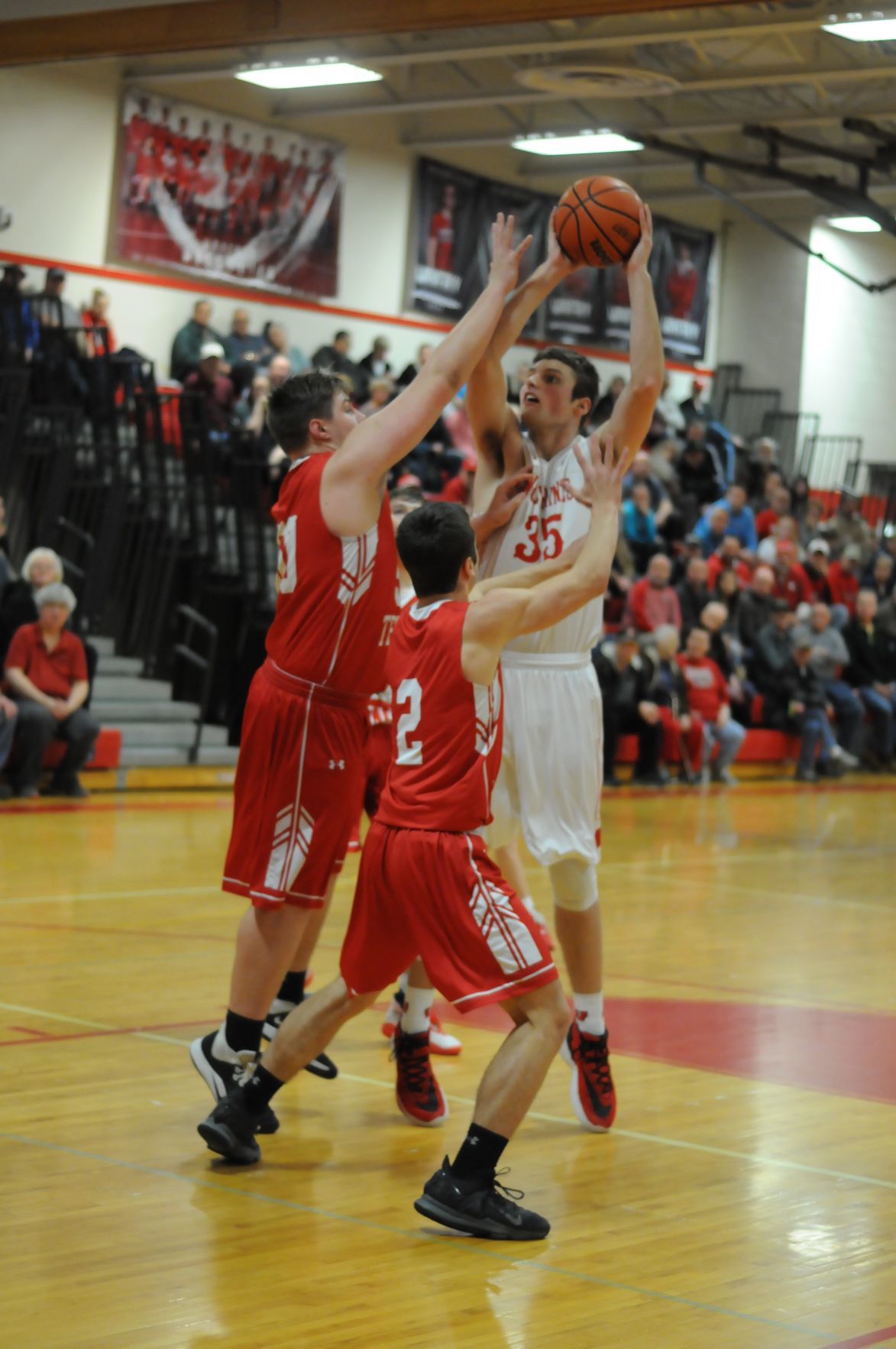 Waverly’s Scott Woodring faces the basket looking for two of his career-high 42 points in his team’s game against Troy Monday night.

Caden Hollywood of Waverly goes up with the finger roll during his team’s game against Troy Monday night.

Waverly’s Scott Woodring faces the basket looking for two of his career-high 42 points in his team’s game against Troy Monday night.

WAVERLY — Nobody saw this coming.

Even Waverly Coach Lou Judson was impressed by how well his team played Monday night as the Wolverines overwhelmed Trot 83-50 in a nonleague contest.

“That was probably the most complete game we’ve played all season,” said Judson. “We came ready to play. We have not played well offensively even though we have played well on the defensive end. (Monday night) we put it together at both ends.”

Waverly only led by four points — 12-8 — at the end of the first quarter. The teams battled back and forth in the second. Waverly extendeed its lead to at many as 10 points at one point, but Troy battled back to get within five.

The half ended with Waverly up 35-27, but the Wolverines were just getting started.

Led by Scott Woodring, who scored a career-high 42 points and added 15 rebounds and four blocks in the game, Waverly added 48 second-half points.

“Scott looked the way I thought he would this time of year,” said Judson after the game. “He’s been leaning in and looking for the foul. Tonight he was going to the rim.”

Just as impressive, the Wolverines held the Trojans to 23 points after the break. One of the keys to that was keeping high-scoring Ty Barrett under wraps. Judson lauded the defensive work of Peyton Bowen, Jalen McCarty and Griffen Stein who limited Barrett to 22.

Running fresh legs at the Trojan Sophomore had the desired effect.

“We threw a lot of defenders on him,” said Judson. “It just so happened he got tired.”

Other than Barrett, Troy got little offense. Nick Williams had eight points but no other Trojan player had more than five.

Waverly, on the other hand, got 12 points and six boards from Caden Hollywood, eight points and six rebounds from Stein. Bowen and Kobe Decker had six points each and Joey Tomasso added five points and five assists.

“It’s a good measuring stick when you cross over and play a team in a different league. Troy’s one of the good teams in the NTL and we represented the IAC well.

TIOGA CENTER — Tioga had won five of seven going into Monday night’s game but the magic wasn’t there on this night.

Spencer-Van Etten led 9-8 after a quarter but turned up the wick in the second period to take a 26-12 lead into the locker room at halftime.

The Tigers played the Panthers nearly even in the second half, but most of the damage was already done.

James Sutherln led S-VE’s second-quarter surge with six of his 12 points on the night. Marcus Brock netted nine of his 12 points in the fourth quarter and Noah Mack, seeing his first game action of the season after injuring his knee right before football season, popped for 11 points with nine coming in the third quarter.

S-VE will visit Candor tonight and Tioga will visit Edison on Thursday.

ELMIRA HEIGHTS — On the road, Athens established a 37-29 halftime lead and made it hold up to get a nonleague win.

JJ Babcock had 14 of his game-high 21 points in the first half and Aaron Lane, who finished with 19 points, had 12 of those before halftime.

Athens will host Canton Thursday night at 7 p.m. in a semifinal of the NTL Showcase