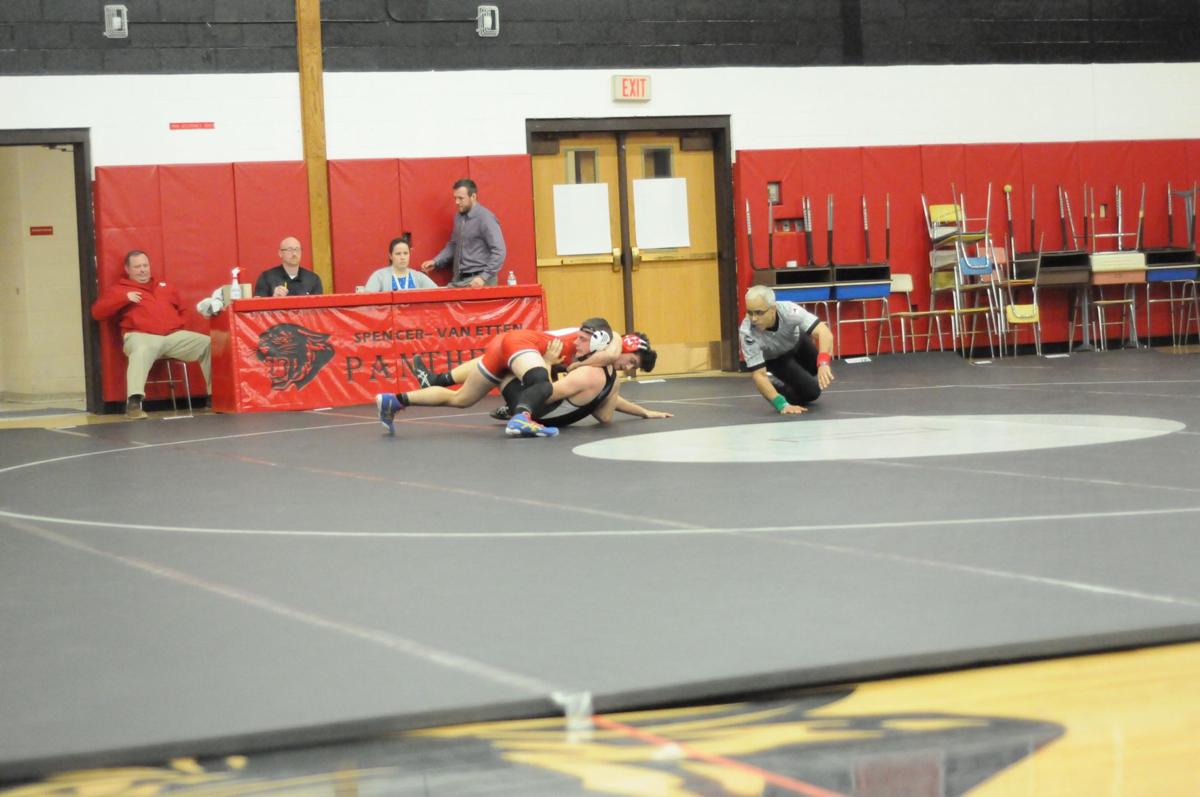 Waverly’s Austin Kimble is well on his way to a pin during his team’s match at SVEC Wednesday night. 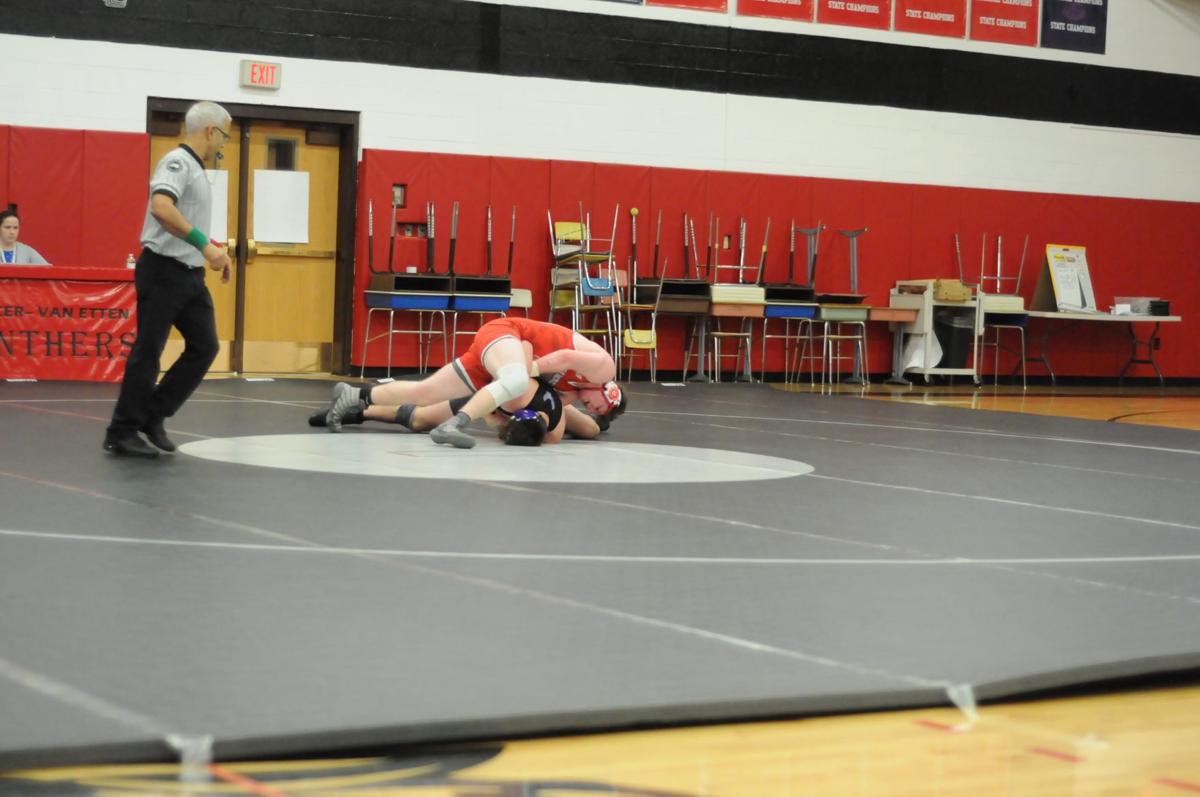 Waverly’s Gage Tedesco works toward a major decision at 192 during hie team’s IAV match against SVEC on Wednesday night. 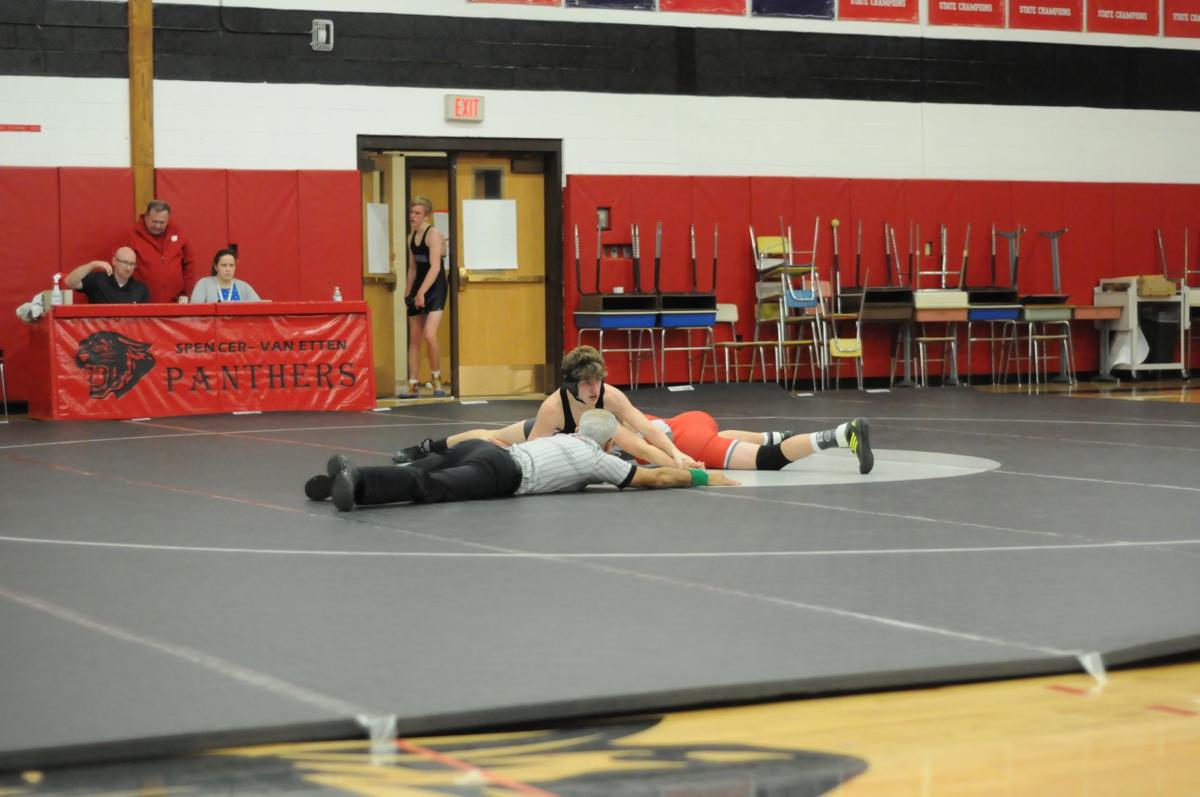 SVEC’s David Knickerbocker looks up late in a pin win at 145 during his team’s IAC match against Waverly Wednesday night.

Waverly’s Austin Kimble is well on his way to a pin during his team’s match at SVEC Wednesday night.

Waverly’s Gage Tedesco works toward a major decision at 192 during hie team’s IAV match against SVEC on Wednesday night.

SVEC’s David Knickerbocker looks up late in a pin win at 145 during his team’s IAC match against Waverly Wednesday night.

SPENCER — In what figured to be a tight match from start to finish, Spencer-Van Etten/Candor nipped Waverly 42-37 in an IAC match Wednesday night.

With both teams missing some wrestlers, the Eagles took advantage of three pins — one a reversal of a result from the IAC Championships on Saturday — and a 4-3 edge in forfeits to get the win.

“We figured it would be a close match. Waverly’s a tough team,” said SVEC Coach Jesse Buck. “We were both missing some starters, but it played out in our favor.”

“They did what they had to do to secure the match,” said Waverly Coach Devan Witman. “They didn’t want it coming down to the last match and I understand that.”

For Waverly, it was a disappointing defeat.

“This one was disappointing because more than any time before, I felt we should have had this one. We had a couple of guys who weren’t in school and a couple of guys had been out of practice with illness. They showed up willing to fight. It was a situation where we needed to come out in those close matches and we just didn’t.”

The match began at 182 where the Eagles’ Nick Tubbs hooked up with Waverly’s Trevor Meyers. The two had a close match in the IAC Championships with Meyers coming out on top. Wednesday night, the tables were reversed. Tubbs not only got the win; he got it by pin.

“Nick lost to that guy at IACs and to get the win by pin was big,” said Buck.

At 138, Waverly’s Garrett Skeens met Hunter Cleveland. The match was tight throughout, but Skeens, clearly sick, held on a for a 5-4 win.

“At 138, Hunter Cleveland had just had one day being able to practice after coming back,” said Buck. “He didn’t get the win, but being able to make it close was big for the team.”

Then John Hammond added six more for the Eagles with a pin of Waverly’s Trent Skeens and Wyatt Stouffer accepted a forfeit at 99 to put the Eagles up 24-4.

Waverly added 12 points with forfeit wins at 106 and 113 for Conner Stotler and Madison Yeakel, respectively to make it 24-16.

Forfeits to SVEC’s Cameron Lehman at 120 and Ousmane Duncanson at 132 were sandwiched around a forfeit win for Rylan LaForest at 126 to leave the Eagles with a 36-22 lead when wrestling resumed after the brief intermission of raised hands.

That was where Skeens got his win at 138.

David Knickerbocker and Austin Kimble got pins for the Eagles and Wolverines, respectively, at 145 and 152.

Waverly’s Ethan Stotler went out and pinned Devin Beach at 170 to set the final margin.

Waverly will visit Corning on Tuesday and SVEC will visit Horseheads on Wednesday.

TIOGA CENTER — This match was won when it was scheduled as Tioga accepted nine forfeits.

For Whitney Point, Hunter Ballard accepted a forfeit at 160, followed by pin wins by Killian Prentice at 170 and Austin Quail at 182.

Tioga will participate in the Section IV Duals on Saturday. The top seed in Division II, Tioga will wrestle the winner of a quarterfinal match between Bainbridge-Guilford/Afton/Harpursville and Owego at Chenango Forks High School at 1:30 p.m. The finals are at 4:30 p.m.