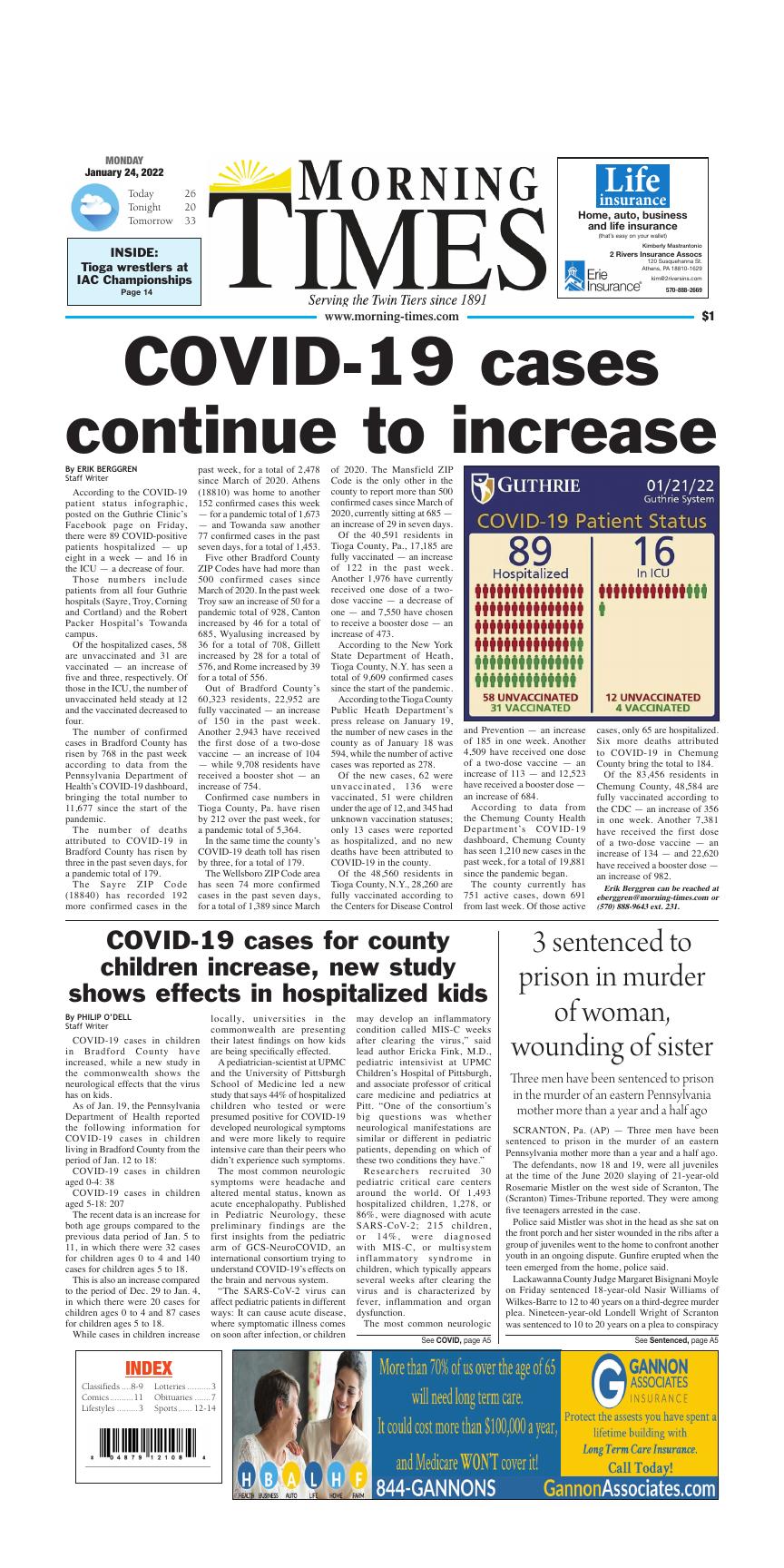 According to the COVID-19 patient status infographic, posted on the Guthrie Clinic’s Facebook page on Friday, there were 89 COVID-positive patients hospitalized — up eight in a week — and 16 in the ICU — a decrease of four.

Those numbers include patients from all four Guthrie hospitals (Sayre, Troy, Corning and Cortland) and the Robert Packer Hospital’s Towanda campus.

Of the hospitalized cases, 58 are unvaccinated and 31 are vaccinated — an increase of five and three, respectively. Of those in the ICU, the number of unvaccinated held steady at 12 and the vaccinated decreased to four.

The number of confirmed cases in Bradford County has risen by 768 in the past week according to data from the Pennsylvania Department of Health’s COVID-19 dashboard, bringing the total number to 11,677 since the start of the pandemic.

The number of deaths attributed to COVID-19 in Bradford County has risen by three in the past seven days, for a pandemic total of 179.

Confirmed case numbers in Tioga County, Pa. have risen by 212 over the past week, for a pandemic total of 5,364.

In the same time the county’s COVID-19 death toll has risen by three, for a total of 179.

According to the New York State Department of Heath, Tioga County, N.Y. has seen a total of 9,609 confirmed cases since the start of the pandemic.

According to the Tioga County Public Heath Department’s press release on January 19, the number of new cases in the county as of January 18 was 594, while the number of active cases was reported as 278.

Of the new cases, 62 were unvaccinated, 136 were vaccinated, 51 were children under the age of 12, and 345 had unknown vaccination statuses; only 13 cases were reported as hospitalized, and no new deaths have been attributed to COVID-19 in the county.

According to data from the Chemung County Health Department’s COVID-19 dashboard, Chemung County has seen 1,210 new cases in the past week, for a total of 19,881 since the pandemic began.

The county currently has 751 active cases, down 691 from last week. Of those active cases, only 65 are hospitalized. Six more deaths attributed to COVID-19 in Chemung County bring the total to 184.

COVID-19 cases in children in Bradford County have increased, while a new study in the commonwealth shows the neurological effects that the virus has on kids.

As of Jan. 19, the Pennsylvania Department of Health reported the following information for COVID-19 cases in children living in Bradford County from the period of Jan. 12 to 18:

While cases in children increase locally, universities in the commonwealth are presenting their latest findings on how kids are being specifically effected.

A pediatrician-scientist at UPMC and the University of Pittsburgh School of Medicine led a new study that says 44% of hospitalized children who tested or were presumed positive for COVID-19 developed neurological symptoms and were more likely to require intensive care than their peers who didn’t experience such symptoms.

The most common neurologic symptoms were headache and altered mental status, known as acute encephalopathy. Published in Pediatric Neurology, these preliminary findings are the first insights from the pediatric arm of GCS-NeuroCOVID, an international consortium trying to understand COVID-19’s effects on the brain and nervous system.

“The SARS-CoV-2 virus can affect pediatric patients in different ways: It can cause acute disease, where symptomatic illness comes on soon after infection, or children may develop an inflammatory condition called MIS-C weeks after clearing the virus,” said lead author Ericka Fink, M.D., pediatric intensivist at UPMC Children’s Hospital of Pittsburgh, and associate professor of critical care medicine and pediatrics at Pitt. “One of the consortium’s big questions was whether neurological manifestations are similar or different in pediatric patients, depending on which of these two conditions they have.”

Researchers recruited 30 pediatric critical care centers around the world. Of 1,493 hospitalized children, 1,278, or 86%, were diagnosed with acute SARS-CoV-2; 215 children, or 14%, were diagnosed with MIS-C, or multisystem inflammatory syndrome in children, which typically appears several weeks after clearing the virus and is characterized by fever, inflammation and organ dysfunction.

“Thankfully, mortality rates in children are low for both acute SARS-CoV-2 and MIS-C,” said Fink. “But this study shows that the frequency of neurological manifestations is high—and it may actually be higher than what we found because these symptoms are not always documented in the medical record or assessable. For example, we can’t know if a baby is having a headache.”

According to Fink, the team recently launched a follow up study to determine whether acute SARS-CoV-2 and MIS-C—with or without neurologic manifestations—have lasting effects on children’s health and quality of life after discharge from hospital.

“Another long-term goal of this study is to build a database that tracks neurological manifestations over time—not just for SARS-CoV-2, but for other types of infections as well,” she added. “Some countries have excellent databases that allow them to easily track and compare children who are hospitalized, but we don’t have such a resource in the U.S.”

Click and hold your mouse button on the page to select the area you wish to save or print. You can click and drag the clipping box to move it or click and drag in the bottom right corner to resize it. When you're happy with your selection, click the checkmark icon next to the clipping area to continue.

Check your email for details.

Submitting this form below will send a message to your email with a link to change your password.

An email message containing instructions on how to reset your password has been sent to the e-mail address listed on your account.

Your purchase was successful, and you are now logged in.

A receipt was sent to your email.